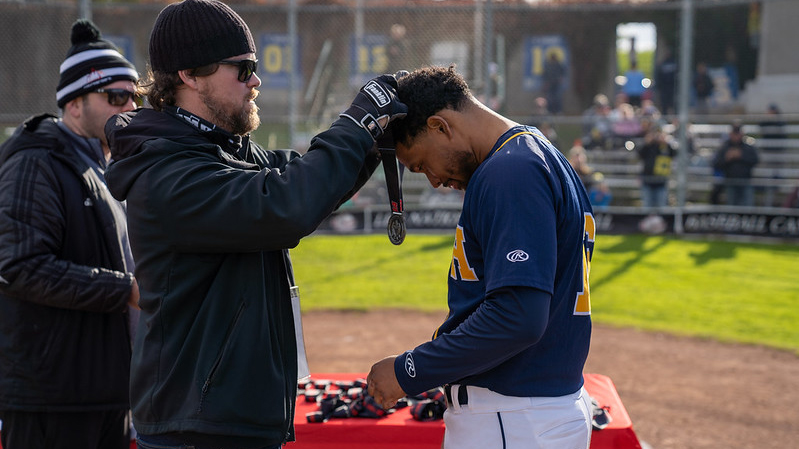 It was a season to remember for the Hawks despite taking the silver medal at the Ontario Colleges Athletic Association (OCAA) final against Windsor’s St. Clair Saints.

Coach Troy Black loved his team’s efforts throughout the season and remains hopeful for his team to be back to the gold medal game next season.

“While it’s not the result we ultimately wanted going into the tournament, I’m proud of the way our guys battled adversity all weekend long,” Black said after the Oct. 23 gold medal game in Oshawa, Ont. “We emptied it out on the field and even though we could’ve played better in some aspects of the game, I give a lot of credit to our guys for the character they displayed,” 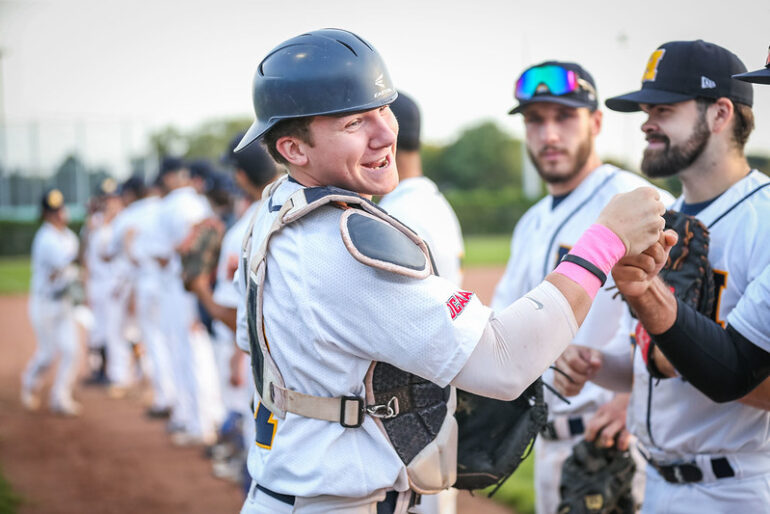 Tyrus Bath, the catcher for the Hawks, is being touted as a leader for the team next season. PHOTO CREDIT/COURTESY OF HUMBER ATHLETICS

The team, which was 11-3 this season, will be returning next year without outfielder Dennis Dei Baning, who played his last season of college eligibility this past season.

Baning finished off his last season with the Hawks putting up historic numbers winning himself the triple crown for leading the league in batting average, home runs, and runs batted in along with winning the OCAA Men’s Baseball Player of the Year award.

He was happy when hearing the news, he had won.

“My phone started buzzing like crazy saying congrats and I didn’t know what it meant till I saw the post on Instagram,” Dei Baning said. I broke down a little when I got home, I worked so hard for this and it’s just heartwarming to see an accomplishment like that. It’s a huge deal that I can look back on for the rest of my life,” Baning said.

Black couldn’t agree with the league’s decision more on picking Dei Baning to take the award.

“Nobody deserves that award more than he does,” he said. “He is one of the hardest working guys I’ve ever met, and having coached him for three to four years now, watching him mature and grow into the leadership role he’s taken on has been a big deal, and I’m excited about what the future holds for him.”

Liam Sutherland, former Hawk and past winner of the OCAA Player of the Year in 2017, reached out to his former teammate to congratulate him on the win.

“To see Dennis win it really makes me happy because knowing him personally and seeing how much time and effort he has put into becoming not only a better baseball player but a better person as well is really inspiring,” Sutherland said. “He is what being a Humber Hawk is all about and there is no one more deserving of such an award than him. He will go down as one of the greats in Humber Hawk history,”

The Hawks will certainly feel the loss of Dei Baning next season but the team is hopeful for the future as the team is built with young blossoming talent like Hawks catcher Tyrus Bath. 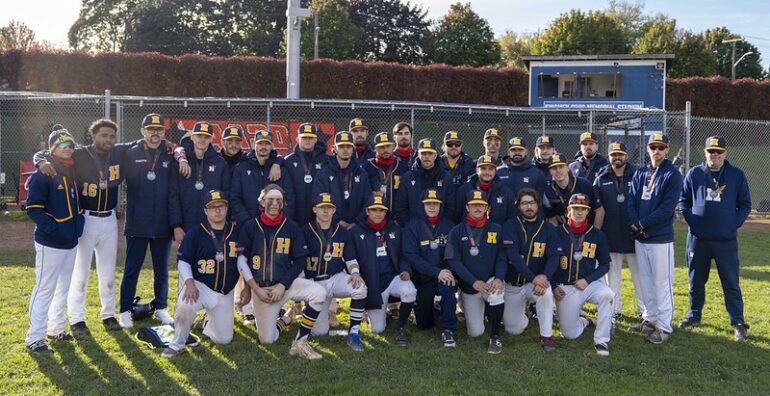 Humber Hawks finished their season with a silver medal after defeating Seneca in the bronze medal game and losing to St. Clair in the gold medal game on Oct. 23 in Oshawa, Ont. PHOTO CREDIT/HUMBER ATHLETICS

Bath is one of the players Black says he’ll look to lean on to be a leader next season as he’ll be one of the older players on the team. Entering his third year, Bath finished the season with four hits and six runs in the team’s last five games. One of those hits was a clutch RBI double to put the Hawks over the Seneca Sting and into the gold medal game.

“Tyrus has been a vocal and emotional leader for us all year. Having him come up big in some big moments last weekend was awesome to see because nobody wants to win and see the team succeed as much as he does,” Black said. “We’re lucky to have a guy like him around who is truly a ’team first’ player.”

Bath is hopeful for his play and his team next season as they look to place better than silver.

“As a team, we are young but talented and I believe a lot of these young guys got to learn a lot from our seniors like Dennis this past season and I believe they are ready to take that next step.” Bath said, The future of this team is extremely bright and I believe we have the right group of guys to go do something special next season.”