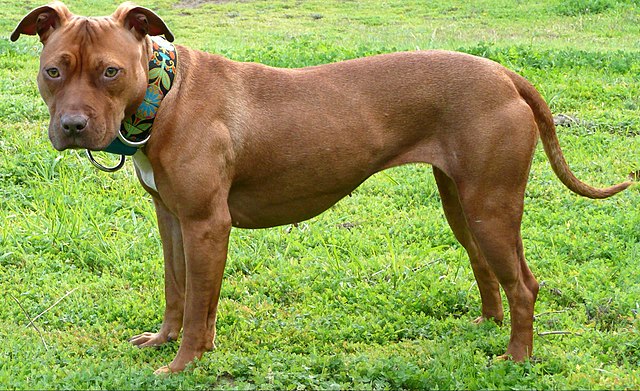 The Doug Ford government announced it was loosening pit bull regulations on Nov. 1, but has halted any further changes following an attack on the same day.

Pit bulls were banned in Ontario in 2005 after two attacked a Toronto man.

Following years of the ban, known as breed-specific legislation, Ford had promised to rescind it.

The government was to start with releasing potential pit bulls until their breeds were confirmed. However on the same day, a 13-year-old Vaughan, Ont., boy was bitten in the face by one of the released dogs, which uprooted the province’s plans.

But pit bull supporters are undeterred.

“They are really intelligent, and make great family pets,” said Elissa St. John, a local foster caregiver. “Sadly, they are often abused and are subject to physical changes like clipped ears to make them look more intimidating.”

Despite earlier statements by Ford suggesting further easing of restrictions, including a potential removal of the ban, the premier has changed his mind, and now says there is no immediate move to further change any laws.

“Nothing is going to change right at this point,” said Ford when asked about plans to repeal the ban. “Our thoughts are with the family.”

Among the many vocal critics are dog owners themselves.

From the beginning of the ban dog owners have voiced their opposition to a rule they believe unfairly punishes a breed of dog rather than the people that are supposed to train them.

Pit bulls have been known to be used as fighting dogs, to which supporters of the breed believe that the punishments should target the owners that abuse their dogs in this way.

St. John said that pit bulls are not any more violent than other breeds, they have been bred into it.

“Any dog can be trained to be mean, but unfortunately pit bulls were chosen,” she said. “People also get them and don’t train them correctly.”

Vocal opposition is also found in animal rights groups and charities throughout the province. These organizations have said that the ban unfairly targets breeds and again, not the people owning them.

The Ontario Society for the Prevention of Cruelty to Animals provided a statement outlining its position.

“The Ontario SPCA and Humane Society is in favour of repealing the pit bull ban,” said Melissa Kosowan, the associate communications director.

While it is unable to alter regulations, the OSPCA took steps to protect animals within the confines of the law.

“When any piece of legislation is incongruent with the mission of the charity, the Ontario SPCA and Humane Society undertakes courses of action to protect the interests of animals and animal well-being,” Kosowan said.

“An example of this would include the transfer of a pit bull to a geographic area where pit bulls may be legally owned,” she said.

Pit bulls have a mixed history, having been the subject of widespread breeding, and in some cases, being used as fighting dogs, but this has not always been the case.

More than 100 years ago, they were known as “nanny dogs” due to their affinity for children and family units. This is a stark contrast from the current stereotype of the breed being aggressive and dangerous is rampant.