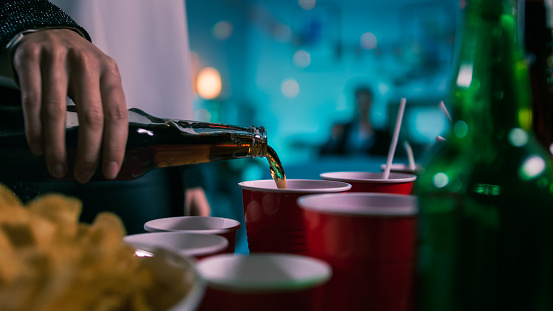 Leah Mulat, a student at Western University, knows the pressure of going to school while working to earn the money to pay for it.

“I have full-time courses and I work a part-time job,” said Mulat, an undergraduate Psychology student. “Some weeks it seems like seven days in a week isn’t enough time.”

She copes with stress by making time to relax and do things she likes. But Mulat knows there are people who are less successful at managing pressure.

“It’s hard to see some people struggle and turn to alcohol, especially in the university,” she said.

Drinking may become a routine for students or a reward for finishing an assignment. Over time, however, drinking can come to take priority over attending class, doing homework or studying for final exams.

College drinking is common and the first six weeks of freshman year are the most vulnerable times. College years as a whole are some of the most experimental times with alcohol, as four out of five students consume alcohol to some degree.

Campuses with heavy athletic programs and teams tend to drink more, according to research from the National Institute on Alcohol Abuse.

Shamar Dover, an M.Sc. in counselling psychology, says being away at post-secondary school proves to be a challenging time and is when most students begin to drink and experiment.

“It’s quite a transitional stage, leaving your childhood home and being on your own,” he said. “Feeling pressure from peers can also play a huge role in a young person’s decision to consume alcohol or not.”

Dover said a friend may be able to recognize when someone may be taking their drinking too far. The way they act, speak and conduct themselves all play an indicator.

Alcohol use is commonly referred to as “the college experience” but it causes academic problems, health issues, assault, and in extreme cases, even death, according to the NIAA study.

Other risk factors include issues with mental health, injuries, driving under the influence and police involvement.

Canadian law states the maximum legal blood alcohol concentration (BAC) is 80 milligrams of alcohol in 100 millilitres of blood for a fully licensed driver. But Ontario drivers with a BAC between 50 milligrams and 80 milligrams in Ontario are suspended for three days and receive a $250 fine.

Many college students in Ontario have a G1 or G2 license, which means no alcohol can be in their blood.

Although, because these beverages have a different percentage of alcohol, one mixed cocktail could affect someone more than one beer. At a college party or event, this may be abused and consumption could rise.

Haylie Suban, a Child Care and Youth program grad at Cambrian College, recalled a friend’s experience where she was easily influenced and heavily partied in her first year.

“Good thing she was able to pull herself out and get back to focusing on her schooling by second year,” Suban said. “It’s important to watch over your friends. A really good person can go down the wrong road.”