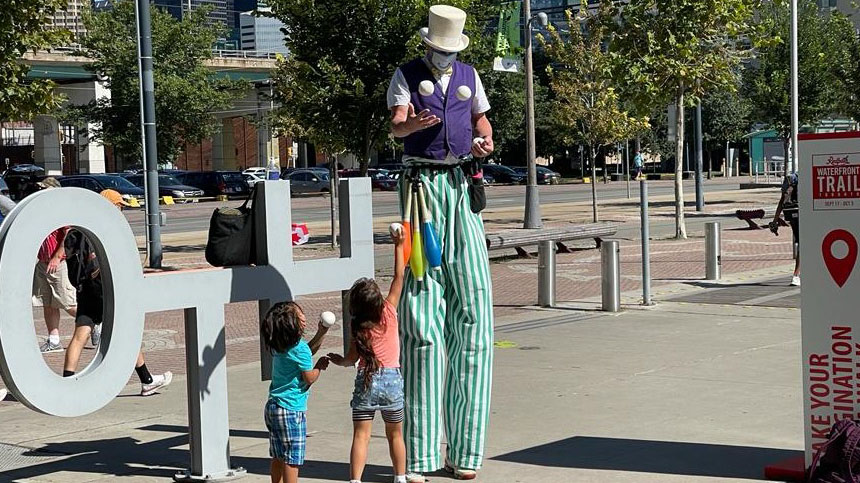 Mama Duck, the tallest and largest rubber duck in the world, is virtually returning to Toronto’s Harbourfront.

The huge yellow duck made a splash at the Waterfront four years ago, but COVID-19 is forcing its return to Toronto to be virtual as part of the Redpath Waterfront Festival.

John Mitchell, an electrician, is huge fan of the festival.

“I am a lover of the Harbourfront, it’s amazing to see how creative they get every time,” he said. “The A.R. (Augmented Reality) stops are fascinating to my 69-year-old self, it’s not every day you see an old man staring at the phone screen instead of the newspaper.”

The festival that has Mitchell so enthused runs for two weeks, Sept. 17 to Oct. 3, and spans more than two kilometres along the waterfront, offering augmented reality, artworks, and delicious food.

The trail’s highlights include walking on water and watching whales swim in the sky. Traveling to the past, people can see what the waterfront looked like in the 1920s. Anishinaabe artist, Que Rock, will create a live graffiti mural, telling stories about water as a healer and source of life.

“We wanted to spread out the time to give people multiple opportunities to come down, as well as keep everything socially distant and safe,” trail representative Victoria Mahoney said. “All stops are self-guided and are no-touch.”

The festival’s main attraction, the world’s largest rubber duck, is also making a virtual comeback. The six-story-tall Mama Duck, weighing almost 14,000 kilograms, which brought more than 750,000 spectators in 2017, is gracing Toronto with its digital presence this year. The duck is visible and can be virtually manipulated by scanning a QR code near Rees WaveDeck.

The trail also features entertainers such as circus artist, Mr. Spaghetti Legs, who has been performing professionally for 44 years and can make complex figures out of simple balloons.

“The balloons are a good way to get people’s attention, draw them in and make the whole place look colourful and festive,” he said.

Lea Parrell, co-producer of the Redpath Waterfront Trail, said that after almost two years of COVID-19, the city could use some fun and socially distanced entertainment.

“After such a difficult time, we are very excited to bring this safe and unique trail to Toronto’s waterfront this September,” she said. “We look forward to providing a fun experience that we hope will increase foot traffic and economic impact to this amazing area of our city.”

The trail has been designed and organized to follow the government’s guidelines on social distancing. People should feel safe while attending and enjoying the festival.

The trail will include pop-up entertainment each weekend of the festival, supported by the Reconnect Festival and Event grant program.

“We hope to bring (next year) a more traditional festival back to the waterfront as we’ve done in past years,” Mahoney said. “However, I think we will include some hybrid and virtual elements after seeing the success of the Redpath Waterfront Trail so far.”

The trail was supposed to be held in winter. After seeing the government’s Roadmap to Reopen work successfully, it was brought to Toronto in autumn instead. About 25,000 people are expected to visit this year.

“We highly encourage Humber students to come down and experience the trail,” Mahoney said.