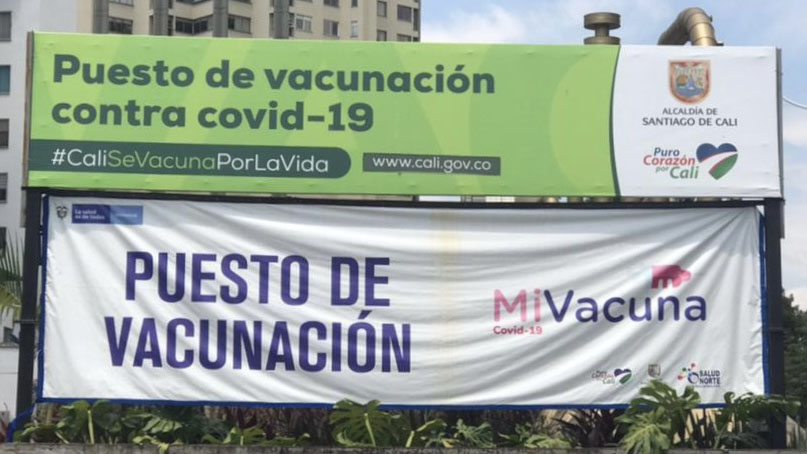 But in a country where COVID-19 vaccines are in short supply, Narvaez was only partially vaccinated, with one dose of AstraZeneca. The lack of a second dose and a brand that doesn’t meet entry requirements in some countries left her wondering if her plans were in vain.

“It’s really frustrating to feel like I’m losing the opportunity to fulfil my dream,” Narvaez said. “Certain vaccines are not approved outside of Colombia, like Sinovac in Europe, and recently the United States said that they would not be letting people with AstraZeneca vaccines into the country.”

AstraZeneca is not approved by the Federal Drug Administration in the United States.

In countries such as Colombia the vaccine is in short supply and a privilege, while the problem in first world countries is persuading hesitant people to take vaccines.

Colombia has suffered a shortage of vaccines for months, with only about 60 per cent of the city of Cali receiving the first dose and only 40 per cent being fully vaccinated. Cali has a population of almost 2.3 million but received vaccines for only 1.9 million doses as of Sept. 15.

The country received 700,000 doses of Moderna vaccines on Sept. 19. Dr. Miyerlandi Torres, Cali’s secretary of health, said the city was expected to receive about five per cent of those shots.

Residents are waiting up to three months to receive a second dose. Manuel Guerrero, a university student in Cali, received his first dose of AstraZeneca on Aug. 21, and his second dose is scheduled for Nov. 13.

“The waiting period does make me wonder things like ‘Is each dose too harsh on you, hence such a long waiting period?'” Guerrero said. “Especially since my experience with the first dose was pretty bad. It hit me quite hard and I was sick for a couple of days.

“So, then, I start to wonder if the second dose will be as bad as the first one, however, I prefer being vaccinated rather than not,” Guerrero said.

Although both Narvaez and Guerrero have been partially vaccinated, others have not been so lucky, especially in certain areas of the city.

Areas such as Commune 20 (comprised of eight neighbourhoods in the western part of the city) and Commune 1 (an urban area in the foothills of the western Cordillera) have the lowest vaccination rates in the city. In Commune 1, there are no vaccination centres, and they have the poorest selection of pharmaceuticals.

Narvaez said she had hoped to move in with relatives in Connecticut to continue her studies. But since the new rules regarding the AstraZeneca vaccine in the U.S., she is left wondering if she can go forward with her plan.

Her parents have been eligible only for the Sinovac vaccine, the brand not accepted in 36 out of the 44 countries in Europe.

“That would mean they wouldn’t be able to visit my eldest sister, who lives in Spain, with her family,” she said.

Colombians hope to get sufficient vaccines to be fully protected and also to access vaccine brands that would enable them to travel, pursue dreams, and see loved ones abroad.