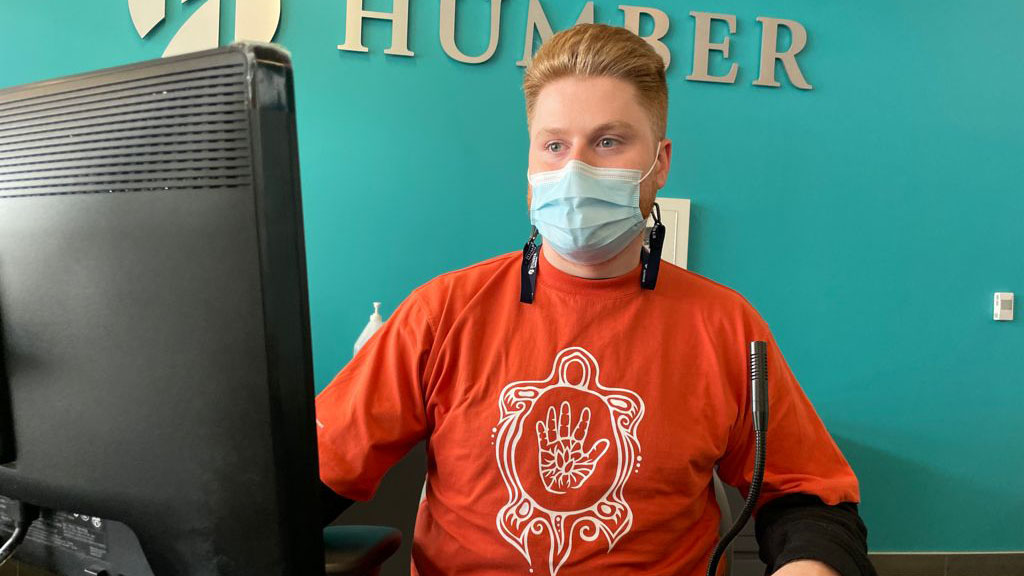 Canada was a sea of orange on Thursday as the country marked its first National Day of Truth and Reconciliation with reflections by leaders and ordinary citizens alike on the horrors of the past, the progress that has been made, and the challenges that remain in relation to First Nations.

“Today is for healing and reflection as we remember the children who never came home, those that did and still feel the impacts, their families, and the wounds from generations of colonialism,” said Selina Young, director at the City of Toronto’s Indigenous Affairs Office.

To reflect the painful history, Humber College flew flags at half-mast on all campuses. Staff members wore orange shirts with the slogan “Every Child Matters.” The shirt represents a commitment to honouring the healing journey of Indigenous people.

“It is now time for action, and no longer are words good enough,” said Jason Seright, dean of the Indigenous Education and Engagement Centre at Humber College. “We must make a disciplined commitment to reconciliation while not ignoring the truth.”

Orange Shirt Day, which coincided with National Day for Truth and Reconciliation, refers to the experience of Phyllis Webstad and symbolizes the stripping away from Indigenous Canadians for their dignity, culture and languages.

Webstad is a residential school survivor, who for her first day of school was given a new orange shirt by her grandmother, a garment stripped away from her by school staff. She was six years old.

Earlier this year, Canadians were shocked to learn of the discovery of hundreds of unmarked graves of children at former residential schools in British Columbia and Saskatchewan.

As heartbreaking as he says the past is, Michael Bryant, a former Indigenous affairs minister in Ontario, said national reconciliation day is a “real testament to societal change.”

“For decades and centuries the response was benign and ignorant by Canadians. However, today, that’s changed,” Bryant told Et Cetera.

The discovery of the children’s graves shattered any national denial by Canadians of an ugly part of the country’s history.

“Everyone is finding it as shocking as they ought to find it and perhaps they’re finally believing that these horrific stories are true,” Bryant said. “I think the country is moving too slowly, but nevertheless is awakening to the truth about Canada’s treatment of Indigenous people.”

Ottawa will now pay a maximum of $40,000 to thousands of First Nations children and their families.

“If a government is committed to engaging in self-determination, then it has to stop defending the status quo, which is what the federal government did,” Bryant said. “Fortunately, the court got it right.”

The court also upheld a second decision after the tribunal’s ruling of certain non-status children be covered under the Jordan’s Principle, which ensures all First Nations children have equitable access to products, services, and supports they need.

“I wish there was something I can do but I know that there isn’t. I’m sorry, I’m just deeply, deeply sorry. I hope that sometime in between now and the end of my life I’ll be able to do something positive,” Bryant said.

The City of Toronto said its commemorations are guided by consultations with Indigenous leaders, community members and Indigenous city staff. It encourages a strong focus on public education.

And on this first national day of reconciliation, Selina Young from the city might have spoken for all Canadians.

“I hope Indigenous communities will find time for healing today and that people will continue to educate themselves on the abuses inflicted on First Nations, Inuit and Métis and take meaningful action to advance truth, justice and reconciliation,” Young said.

“Change requires all of us and is overdue,” she said. “Enough is enough.”