Humber student march takes back the night as it launches 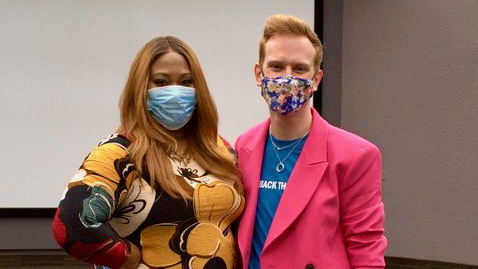 Recurring allegations of sexual violence in Ontario post-secondary schools prompted Humber College to examine its own security to ensure the safest possible environment for students and staff.

“Humber is very big on community and within that community we want people to know we are there for them, no matter what,” said Aaron Brown, co-ordinator for sexual violence prevention and education for Humber.

Statistics Canada reports one in 10 female students are sexually assaulted in a post-secondary environment. Surveys show many victims knew their attacker and believed that if they reported the assault, they would not be believed.

“The National Sex Violence Resource Centre reports that only two to eight per cent of rapes reported are actually found false. So why so many questions? Why the smear campaign?” asked Cheryl Nembhard, a Canadian filmmaker and social advocate who was the keynote speaker at this year’s virtual Take Back the Night for Humber on Wednesday, Humber’s sixth annual rally.

Take Back the Night is held across Canada and the U.S. in remembrance of microbiologist Susan Alexander Speech, who was stabbed to death while walking home in 1975. Citizens of her hometown Philadelphia responded with a march protesting women have the right to walk alone at night and not be afraid.

Nembhard said disbelief from others is often more damaging than the attack itself.

She praised Humber and the University of Guelph-Humber for their efforts to provide both security and compassionate services.

“I’m so super proud of Humber and the University of Guelph-Humber,” Nembhard said.

“There is such a strong commitment to the elimination of sexual violence in campuses and throughout their college communities,” she said.

“Humber College remains so committed to creating safer spaces for students, staff, and faculty. I stand and applaud that,” Nembhard said.

Alex Martin, from Humber’s Consent for Education Program, said her first Take Back the Night event was in 2019 when the rally was held in person. The sense of community always gives her chills, she said.

“Just to be there and support folks who we know are out there.” Martin said.

Humber and Guelph-Humber created the Preventing and Responding to Sexual Violence Committee in 2019, focusing on preventing sexual violence and the education of prevention.

Ian Crookshank, dean of students for Humber, and George Bragues, interim vice-provost for Guelph-Humber, sent an email to students and faculty in September detailing the resources available, such as counseling, off and on-campus supports, phone numbers for helplines, and links to appropriate agencies.

Brown, who was praised Wednesday for his role in trying to eliminate sexual violence, said a key message was to “let people know they are not alone.”