TALES FROM HUMBER: Saying farewell to my best friendwas the most difficult thing I’ve done 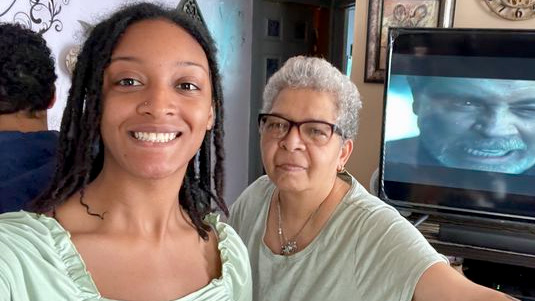 I woke up to the phone call I’d been dreading for two months at 6 a.m. on July 23, 2021. It was a Friday morning. My mother Natasha told me I needed to come home. And I knew.

I knew it was time to say goodbye.

Two months earlier, COVID-19 hit my family hard. My great-grandparents, my great-aunt and uncle, and my grandmother, and my mom and I all contracted it.

My great-grandfather and great-uncle were both hospitalized. A week later, my grandmother Stephanie Mae Price, 59, was rushed to the hospital with trouble breathing.

I broke down and sobbed uncontrollably when I got the news. Not being able to be there by her side, or even just waiting in the hospital because of the COVID-19 rules, was excruciating.

Before contracting the virus, my Hamilton-born grandma didn’t believe it was as bad as it was presented. She thought if she got it, she would overcome it, which might’ve proved true if she had got her vaccine in time. She had been scheduled to get it on the last day of May.

She was given oxygen for the first couple of days she was in the hospital. She slept a lot, so there wasn’t much communication. Then one day I received a message from her, and relief filled my body.

Most of our texts would be me asking how she was doing that day, or her cracking jokes and being her bubbly self.

My great-aunt, Jenny, her sister, received updates twice a day on how she was doing. Everything seemed to be going alright until we were told that she would need to be intubated, which she refused at first until we all convinced her that everything would be fine.

After the intubation, her health seemed to rollercoaster. Some days, she would be stable. On others, we were told to prepare for the worst. She had to be put onto dialysis for kidney failure, which came as a shock to all of us because we were unaware of any kidney issues she may have had.

It got to the point where she could only communicate with us by raising her eyebrows. The more she agreed with what we were saying the higher she would raise them.

The morning my mother called me, I just cried on the train ride to the hospital.

It was time to say goodbye to my grandmother, my best friend, and I didn’t want to face the reality of it. I went into the ICU and couldn’t bear to see her in that state.

All her siblings, children, and grandchildren were there to say goodbye to our most beloved family member. Standing around her bed as Ray Charles played, watching as she took her last breath, was one of the hardest moments I’ve faced in my life.

I held my great-grandmother as she watched her firstborn child succumb to the effects that COVID-19 caused.

“Stephanie! Come on! Wake up!” were the last words my great-grandmother said to her daughter as she slipped away.

“Wally, our baby girl is gone!” she wailed as she hugged my great-grandfather.

My grandmother and I had so many trips we planned to take, so many fun things we wanted to do together.

I know that when I do them, she’ll be right beside me, always.