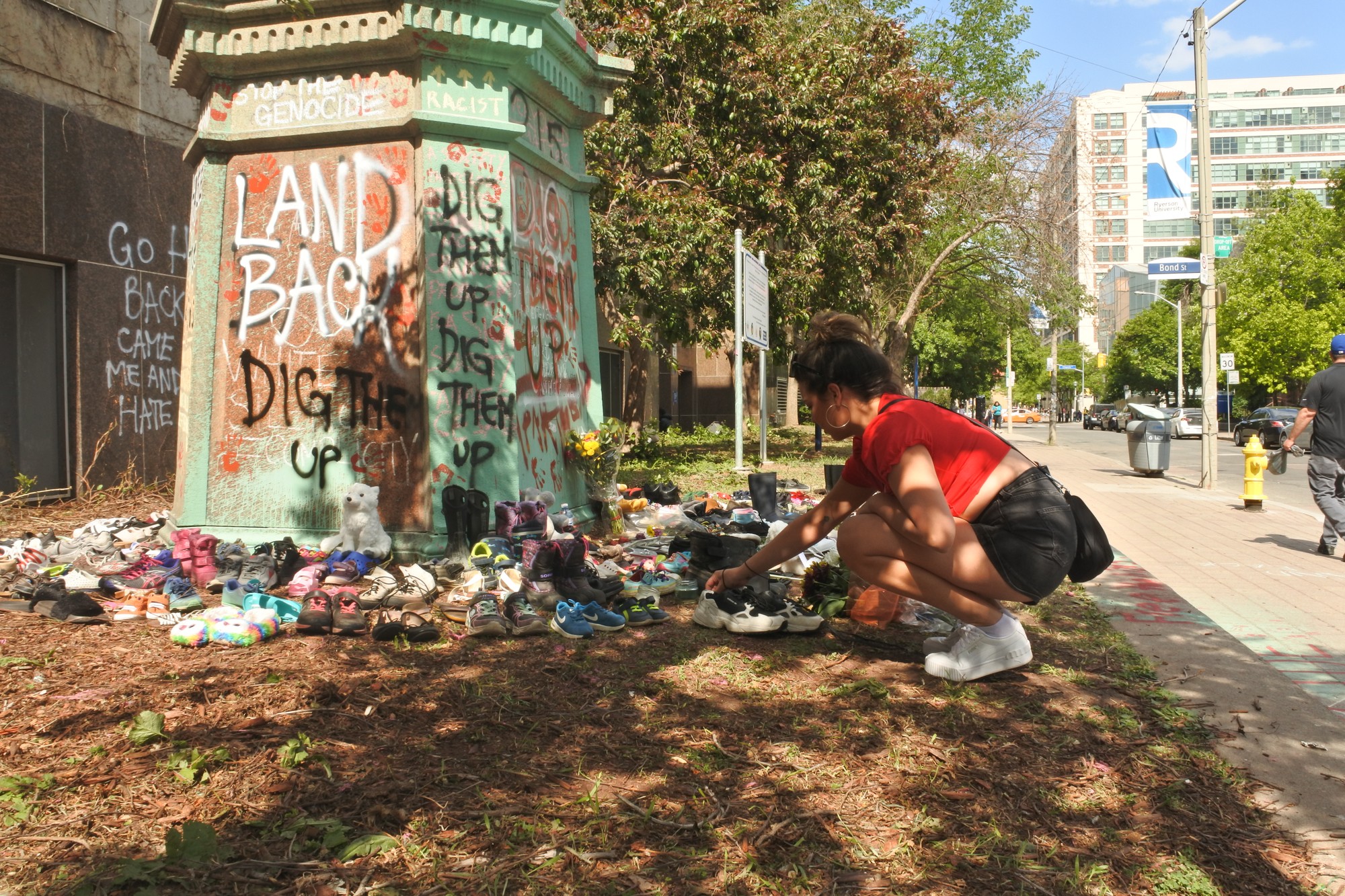 Natasha Fisher brought a pair of shoes and some loose tobacco to lay at the feet of a statue of a man who ravaged her people.

The singer and songwriter of Cree and Ojibwe heritage refused to say Egerton Ryerson’s name or comment about the statue, raised in his honour, that has once again been smeared with red paint.

Fisher went to the statue on Gould and Bond Streets at Ryerson University to pay tribute to the 215 children whose remains were found buried on the grounds of Kamloops Residential School in British Columbia.

“People can’t deny it anymore that this is Canada’s shame,” Fisher said.

The statue of one of the founders of the residential school system — where Indigenous children were forced to attend — was surrounded with shoes, some tiny, and plush toys in tribute to the children.

Spray painted on a brick wall behind the statute was the call to exhume the remains to “Return them home. Show the whole world how many of us you have murdered.” 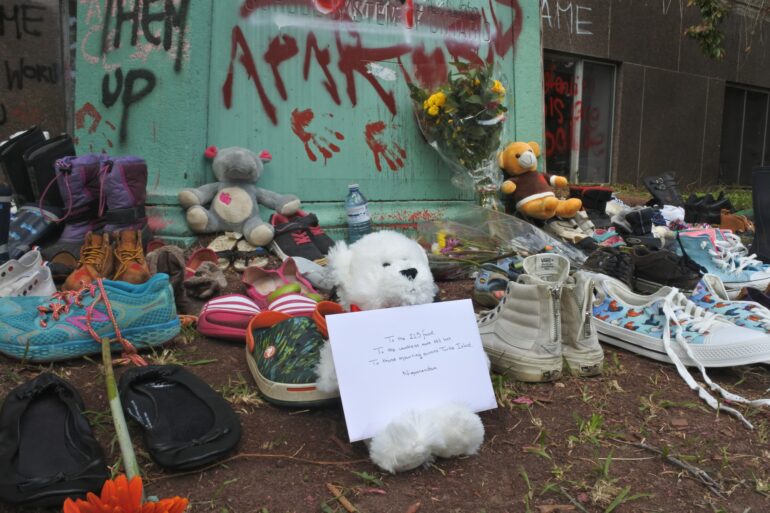 A teddy bear holds a note to the 215 children found buried on the grounds of the Kamloops Residential School. "To the 215 found, to the countless more still lost, to those mourning across Turtle Island, Nimaanendam (I'm sorry in Objibwe)." The area around the Gould Street statue has become a memorial site. Photo credit: Jaeybee Martinito

Ryerson was the architect of Canada’s residential school system, which had a mission to convert and assimilate students into Canadian culture. Indigenous children were taken away from their families, as young as three years old, and suffered physical and sexual abuse.

There were more than 130 residential schools, which often operated under religious supervision between 1839 and 1996, where about 150,000 students attended. They were forced to speak French or English, forced to cut their hair, and required to adopt the religious denomination of the school.

There’s been an ongoing battle for many years with Indigenous groups and activists at the university named after Ryerson to remove the statute and more recently, to change the name of the school.

Victoria Manitowabi stopped by after work Tuesday at the growing memorial to offer tobacco and prayers. The Indigenous woman said she came to educate herself “about this man” and see the monument.

“No one even cared about Indigenous people years ago, so now it’s nice to see communities coming together and fighting for what’s right,” said Manitowabi, an Indigenous woman whose brother-in-law attended the university.

“There’s not much I can do but there’s just something that I just felt in my heart to come and see for myself instead of seeing it online,” she said.

Like Manitowabi, many stopped by to see the monument and spray-painted writings marking the area. Others brought a flowers and cards.

“This [Ryerson statue] is now bringing it in front of people’s faces, which is a good thing, but it’s also bringing up old feelings from residential school survivors that are still here today,” she said. 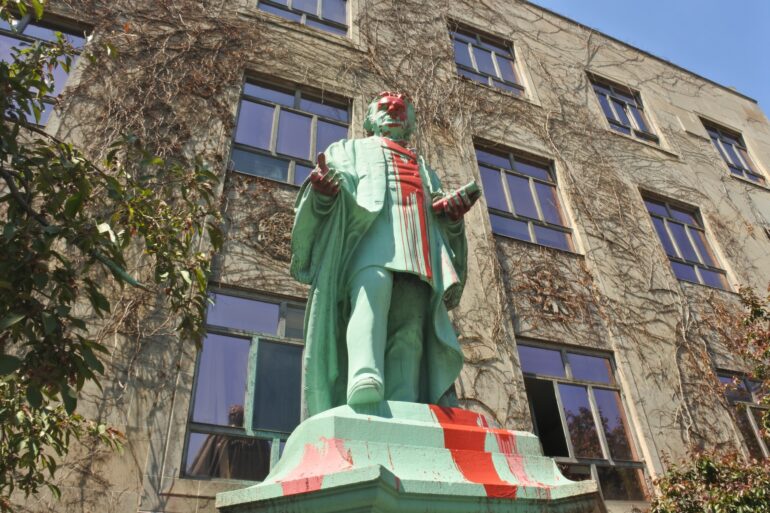 Red paint smears the face the residential school architect Egerton Ryerson on Toronto's Gould Street. The spot is now a memorial site in honour of the 215 children found buried on the grounds of the Kamloops Residential School. Photo credit: Jaeybee Martinito

Fisher’s father is from a family of eight but said she never had an opportunity to be close with any of them. Her family lost a sense of community after they attended a residential school.

“I had to be sheltered from them because they struggled with abuse issues, alcoholism and drug abuse,” she said.

Fisher is choosing to move forward to help the coming Indigenous generations heal from a haunting history. She said she now works closely with children in Thunder Bay, hoping the voices of the next generation be heard.

She refused to comment on the statue and the works of changing the university’s name.

“Maybe that’s not my fight…there’s other people for that. I’m trying to fight for those kids,” she said. “It’s a very emotional time.”

Meanwhile, Ryerson University announced Monday its vote to change the name of the journalism school publication for the fall semester.

A new committee will be formed to “include engaging students in the process and supporting Indigenous creatives in design and branding efforts.”