LONDON, Ont. — First-time mom Lama Aboushamalah held back tears trying to describe how she felt about bringing her one-year-old son to the vigil for a local family who were run down in a suspected hate crime.

“It’s been really hard to imagine what she [the victim] was going through and now there’s a little kid all by himself,” she said.

“I feel for them with every inch of my heart,” Aboushamalah said.

Aboushamalah was among thousands who attended the outdoor vigil Tuesday night for Salman Afzaal, 46, a physiotherapist, his wife Madiha Salman, 44, a doctorate candidate at Western University, his mother Talat Afzaal, 74, and his daughter Yumna Afzaal, 15. Afzaal’s nine-year-old son Fayez remains in local hospital with serious injuries.

London Police allege the driver of a large pickup truck purposely struck down the family while they were waiting for a traffic light to change in the Hyde Park and South Carriage Roads area. Police allege the suspect targeted the family because of their faith, and investigators said there is evidence that this was a planned, premeditated act, motivated by hate.

The suspect fled the area but was arrested about seven kilometres away in Cherryhill Village Mall, apparently wearing a body armour vest, police said.

Nathaniel Veltman, 20, of London, is charged with four counts of first-degree murder and one count of attempted murder. RCMP were investigating to determine if terrorism charges apply.

Police said the federal and provincial Attorneys General and the Public Prosecution Service of Canada allege the murders constituted terrorist activity. Police said there is currently no known or suspected threat stemming from the attack.

London Police and RCMP will continue to collaborate in the ongoing investigation.

A block of Oxford Street was closed down Tuesday to accommodate the crowd of supporters and mourners. The community were joined by religious and political leaders outside London Muslim Mosque, who issued numerous messages against anti-Muslim hate.

“I don’t know how you even break news to a kid like that, about his parents, or his family in general,” Aboushamalah said. 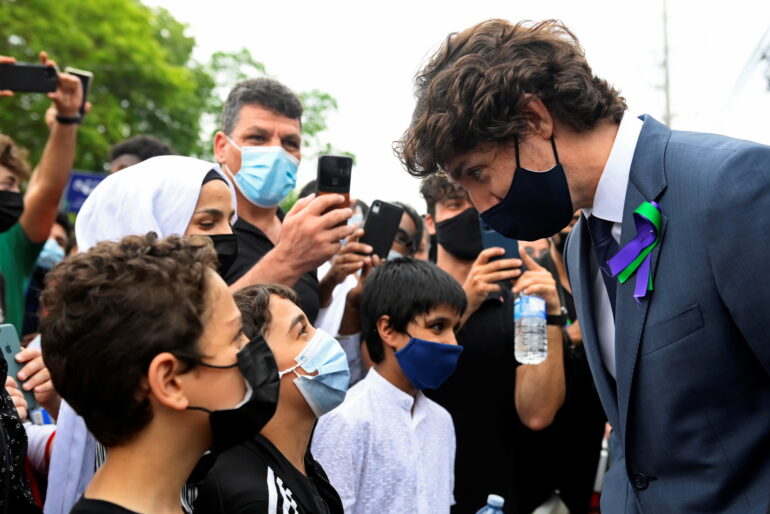 Prime Minister Justin Trudeau interacts with youths at a vigil June 8 outside the London Muslim Mosque organized after four members of a Canadian Muslim family were killed in what police describe as a hate-motivated attack in London, Ont. Photo credit: Nathan Denette/Pool via REUTERS

She said this tragedy is a reminder that people should spend as much time as possible with loved ones.

“Life is fleeting, you never know what could happen,” she said. “This could happen to anyone, so just love the people you love with everything that you have, every single day.

“London is a welcoming city, there’s love way more than there is hate,” Aboushamalah said.

She said she moved to Canada at the age of three and has been living in London for 20 years.

“The community is so welcoming and there’s so many amazing people here. You never would have thought this would ever happen here…this close to home,” Aboushamalah said.

The two met in London when Farooqi, who arrived in Canada in 2010, was living in the Forest City in 2014 when she met Salman, who was studying for her PhD in civil engineering at Western University.

They both loved unwinding their busy days while taking walks together. But unlike Salman, Farooqi wore baseball caps over her hijab to be “less visible” to others.

“I just don’t want to be seen…that’s just the way it is,” she said.

“I want her to be remembered as a soft, gentle, yet determined person who was resilient and who was ambitious, yet composed herself really well, and didn’t show the world if she was struggling,” Farooqi said. 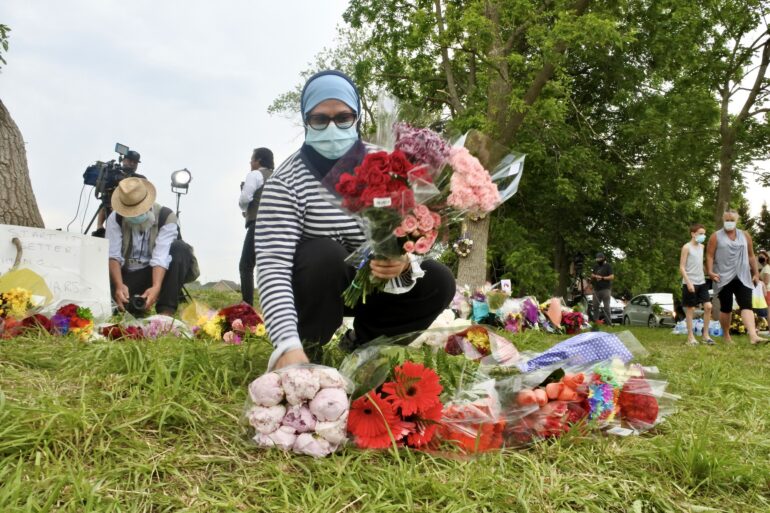 Zina Atta arranges bouquets of flowers at a growing memorial where London of five were run over in a suspected hate crime on Hyde Park and South Carriage Roads. Photo credit: Jaeybee Martinito

“But at the same time, she was a beautiful human being, she was very kind as a mother,” she said. Farooqi said she never seen Salman lose her cool with her children.

“There was a calmness about her,” she said. “I find it hard to believe that she is no more.”

Farooqi said Salman’s family was like any typical immigrant story in Canada, including the husband working two jobs to make ends meet.

She said whenever she visited London, the two planned brunch but the pandemic prevented them from getting together.

Farooqi said Fayez is now in the care of family members, who have been arriving to London. “The boy is fortunate even in these unfortunate circumstances,” she said. “There is blessing that he is so well loved, and his uncle and aunt are taking care of him.

“It is not going to be an easy reality for him,” Farooqi said.

Arifa Zeenat and her family went to the scene and offered prayers to the Afzaal family.

“The worst part is about the boy who is left behind,” she said. “His whole life is ruined, he can get (away from) it.”

Zeenat, 40, whose family moved to London two months ago, said she offered prayers for the family. But she said the community is left feeling fearful following the attack.

“We’re also scared about our community, our kids,” she said. “We are looking at the long (view) at how it will impact our community. I have talked to many of my friends, and everyone is scared by it.”

There are about 30,000 Muslims who live in the city of about 400,000 people, according to Statistics Canada.

Despite the fear, Zeenat said it’s now time for the community to unite.

A GoFundMe page has been started for the victims, and it has surpassed its intended goal of $750,000.