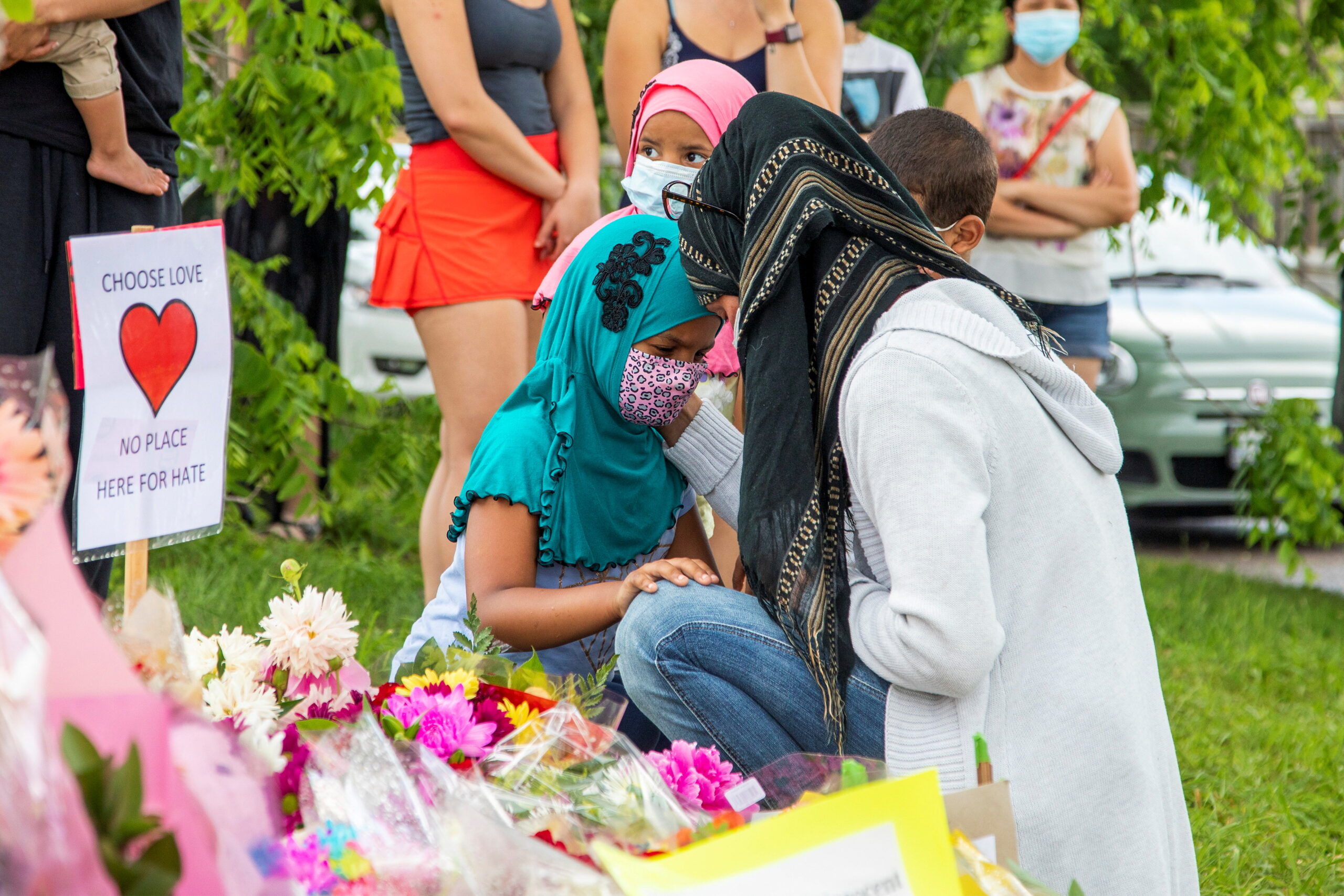 Muslim communities in Ontario are mourning and calling for concrete action against Islamophobia after four people — all from the same family — were killed in a hate-motivated vehicle attack.

“No one should be targeted just because of their faith, and that should never be acceptable,” said Omar Khamissa, the manager of Community Engagement at National Council of Canadian Muslims (NCCM). 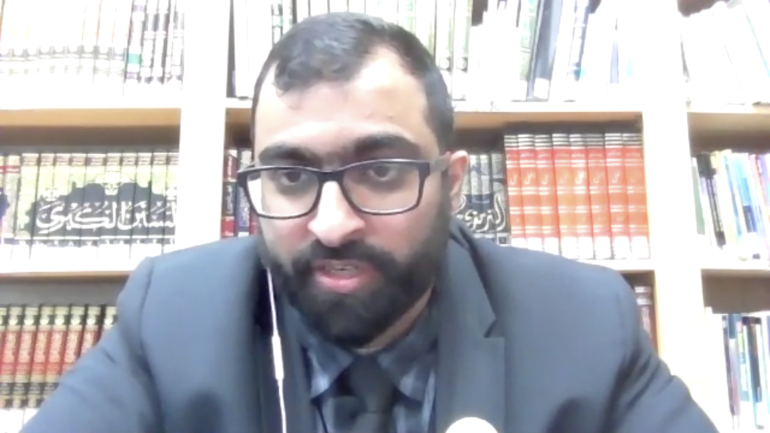 Khamissa told Humber News the NCCM and other organizations are calling on governments to take any action at the provincial and federal levels with a National Action Summit.

“We need a National Action Summit to make sure that Muslims can practice their religion, fear-free of Islamophobia,” he said.

The victims, a family of five, had been out for an evening walk June 6 when they were struck by a pickup truck as they waited to cross the street. London Police said the truck mounted the curb and struck them.

Killed in the attack were Salman Afzaal, 46, a physiotherapist, his wife Madiha Salman, 44, a doctorate candidate at Western University, his mother Talat Afzaal, 74, and his daughter Yumna Afzaal, 15. Afzaal’s nine-year-old son Fayez remains in local hospital with serious injuries. 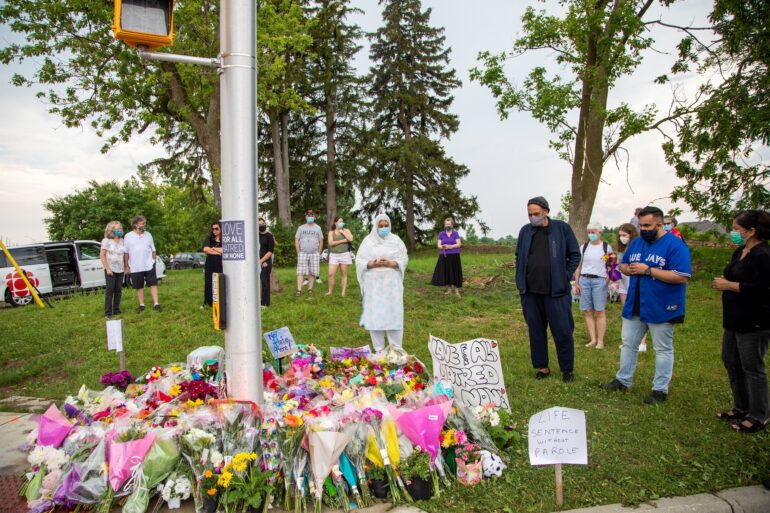 People are seen at a makeshift memorial at the fatal crime scene where a man driving a pickup truck jumped the curb and ran over a Muslim family in what police say was a deliberately targeted anti-Islamic hate crime in London, Ont., on June 8, 2021. Photo credit: REUTERS/Carlos Osorio

The truck fled the scene but was later arrested about seven kilometres away, police said. Investigators believe it was an intentional act motivated by hate and the victims were targeted because of their faith. There is no known previous connection between the suspect and the victims, police said.

London Detective-Superintendent Paul Waight said in a June 7 news conference the suspect “was wearing a vest that appeared to be like body armour… So far, we don’t know of his membership in any specific hate group.”

Nathaniel Veltman, 20, of London, has been charged with four counts of first-degree murder and one count of attempted murder. He was remanded in custody following his first court appearance on June 7. He was further charged with terrorism on June 14.

“We have to see action,” she said. “Unless the rhetoric changes at the political level, unless there is a real plan, how are we going to tackle the issues?” 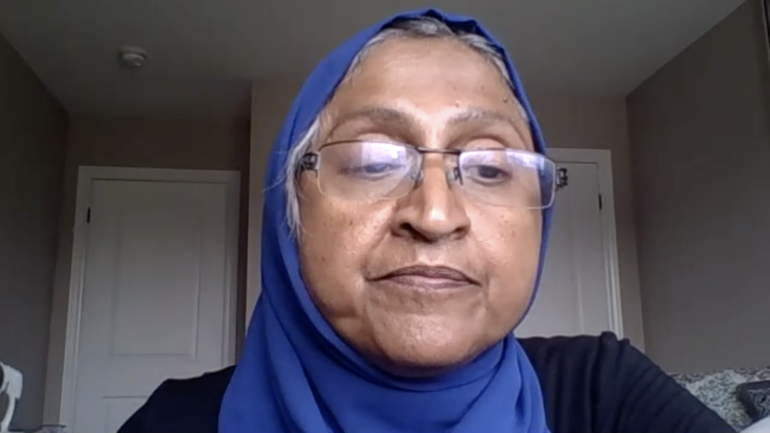 “I am just thinking how close this, and how this could have been any of us,” she said. “Now, I am ‘double thinking’ for my family that they could be targeted for who they are.”

Khamissa remembered the attack on the Quebec mosque in June 2017 which killed six and wounded five others, the murder of Muhammed Aslim, who was killed in front of the Rexall Mosque in September 2020, and the attack on black hijabi women in Calgary and Edmonton.

“We cannot add another day to our community, our heart can’t take another day, ” he said. 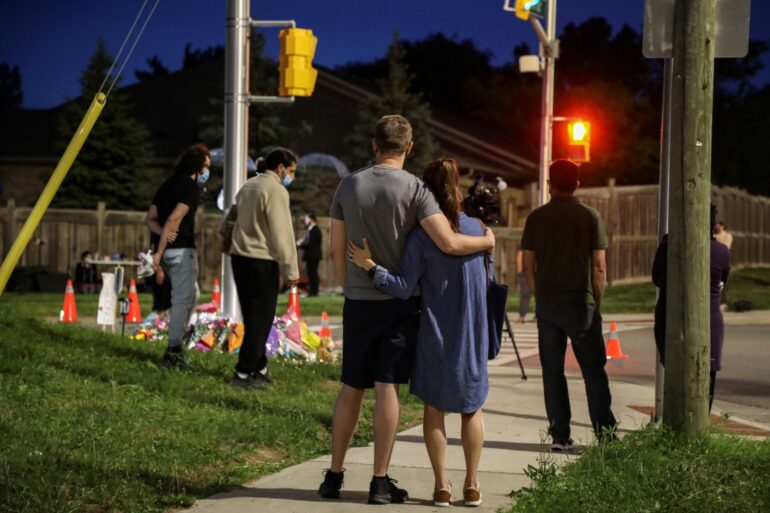 People at a makeshift memorial at the fatal crime scene June 7 where a man driving a pickup truck jumped the curb and ran over a Muslim family in what police say was a deliberately targeted anti-Islamic hate crime in London, Ont. Photo credit: REUTERS/Carlos Osorio

The Muslim community in London scheduled a vigil to honour the victims on Tuesday evening at the London Muslim Mosque on Oxford Street West. The mosque’s Facebook page suggests more than 600 people are expected to attend, including Prime Minister Justin Trudeau, Ontario Premier Doug Ford, and other federal and provincial leaders.

Islamic schools canceled classes in London to allow the community to grieve.

The NCCM will also organize other vigils at Muslim mosques across Canada as well.

“We are going to be doing vigils to pay our respects, to grieve for a family that was lost in the long term there,” Khamisa said.

Meanwhile, several groups, including the Hyde Park Neighbourhood Association, called on people in London and neighbouring towns to draw chalk hearts on sidewalks or display hearts in windows to support the Muslim community.

“Four beautiful people have been taken away with us in such a horrendous manner, ” Mazhar said.