Toronto abstract artist Andrew Stelmack feels very lucky to be doing what he loves and used this privilege to bring residents in Moss Park a little bit of joy amid the pandemic.

Stelmack completely changed the look of the dull wall at 365 Dundas St. E. near Ontario Street three weeks ago by covering it with a captivating mural.

He said it was his first mural. It took him a couple of days to come up with a sketch and a week to finish the abstract artwork called After Every Storm, There Is A Rainbow.

“I’ve been very blessed with the way the career is going,” Stelmack said. “Why not give back? I have the time. You have the wall.”

Before becoming an artist Stelmack spent 25 years as a Canadian stage actor. He said though he loved acting he wanted to explore other paths in life.

“And I decided, believe it or not, for the first time in my life to pick up a paintbrush,” Stelmack said. “And here we are, about 12 or 14 years later, and it’s turned into this excellent, amazing second career, which I hope to do for the rest of time.”

He said the biggest difference for him in being an actor versus an artist is complete artistic freedom.

“When you’re an actor, you’re always auditioning for somebody, you’re always working hard to please someone, to show that you’re good enough, and it’s an endless cycle,” Stelmack said.

“However, as a visual artist, I am in complete control,” he said.

Stelmack said he is a self-taught artist and chose abstract style because it gives an opportunity for each viewer to see something different.

“When you do an abstract piece, and people look at it, it’s a million things over time,” he said.

Stelmack said as an artist he usually starts with an idea, or a colour, or a shape but he never knows what will eventually turn out as during the painting process a lot of details change.

He said these constant ideas also led him to paint the mural.

“It’s interesting that over the last two years I started to add rainbows into my work,” Stelmack said. “I’m a guy who loves the storm, but one of the great things about it is that after the storm there’s always a rainbow. And I started to paint rainbows because subconsciously I wanted the storm to be over.” 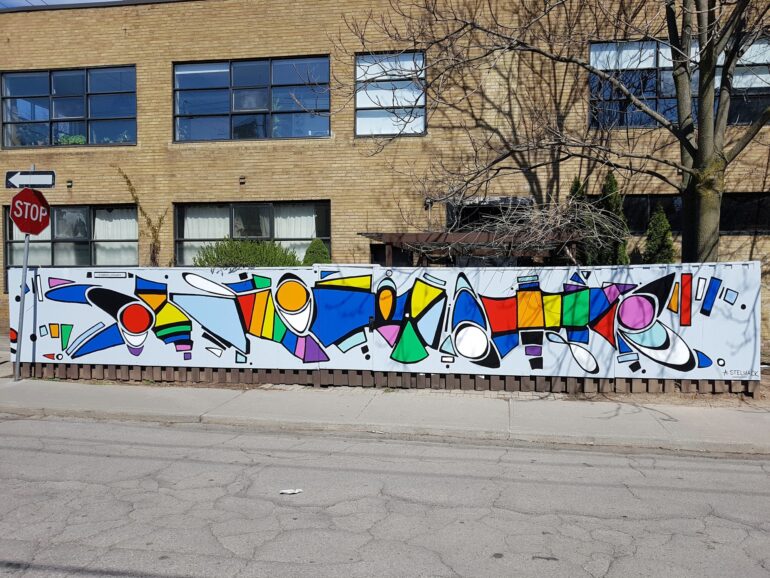 The final result of Andrew Stelmack's artwork. He said the mural serves as a reminder there is always a rainbow after the storm. Photo credit: Courtesy Andrew Stelmack

He said COVID reminds him of a never-ending storm and that’s why he wanted rainbow colours to be in the mural.

“There are also four circles because there are four seasons, and we’re now entering the fifth season of real COVID lockdown if we go back to last March, and so that’s what the mural is,” Stelmack said. “Five seasons are in there and each of them has a rainbow.”

He said the pandemic became kind of a Groundhog Day for many.

“We’ve become very robotic,” Stelmack said. “We’re doing the same thing every day with the one or two people that we know.

“So if I can jolt you out of it for two minutes that makes me very happy,” he said.

He said he didn’t expect to get a huge number of and grateful reactions and feedback for his work.

Stelmack said most of the time people would come over, interested in his art and they would have little discussions about the meaning behind it.

He said one woman got so impressed she even got off a TTC streetcar to take a closer look.

“It actually made this person stop, get off the car, and literally put a halt to her day,” Stelmack said. “I thought this is what it’s all about.”

However, he said the most memorable reactions he got were from homeless people.

He said he definitely plans on painting more murals in the future when the opportunity arises.

Stelmack said he feels satisfied with where he is right now as an artist and with the amount of love and support he receives for his work.

He said his biggest achievement is that he is able to make a living at his art without any side jobs which is a dream for many artists.

“I’m a happy guy, so I don’t aspire for more,” Stelmack said. “I paint what I love, I paint what comes from my heart or from my conscious unconsciousness, and people love it. For me, that’s all I want, I don’t need more.”