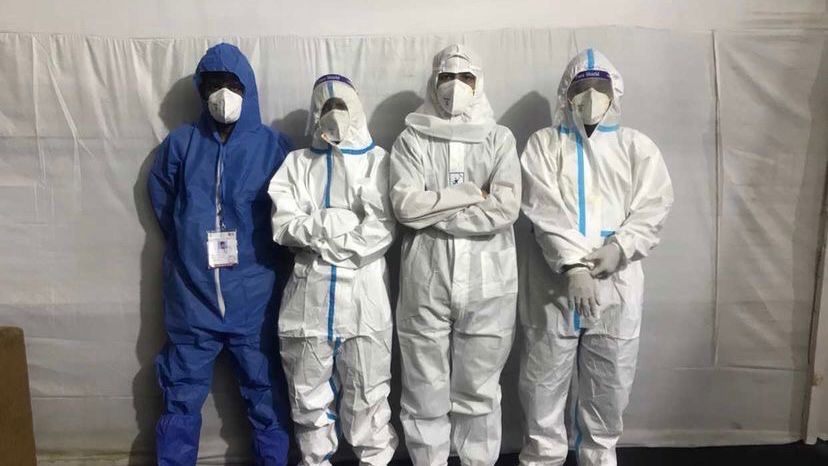 Four young men — all college students without any medical experience — answered the call to help doctors and nurses overwhelmed by COVID patients in an Ahmedabad hospital.

The friends who live in the city in west-central state of Gujarat about 940 kilometres southwest of the capital New Delhi say they responded to a call for volunteers because they want to help those overwhelmed by the numbers of the sick and dying.

Smit Desai, a 21-year-old commerce student, said he and his three friends joined the night shifts in the pop-up hospital in a cricket playground after the surge in mortality rates in the city. Desai said he and his friends were saddened by watching the relatives of those who died waiting in queue to give funeral rites.

The four, despite their lack of medical experience, have not shirked away from any of the support work, from changing diapers to moving bodies.

Desai said they saw an internet message asking for volunteers to assist in the COVID hospital. 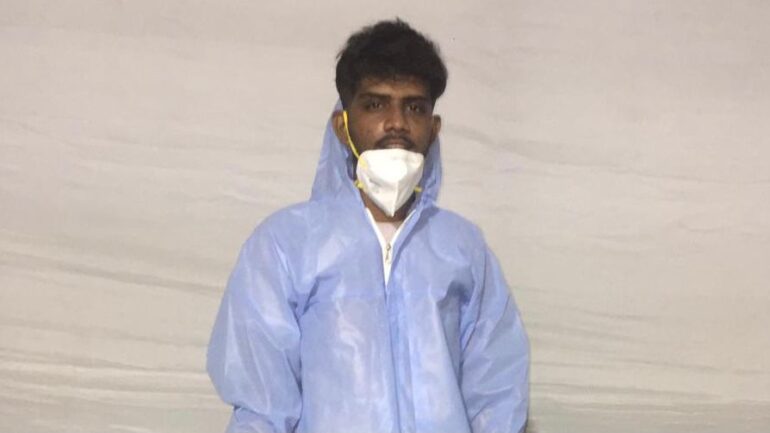 “It was a good opportunity to reach out but we were also concerned about our families,” he said. Desai is concerned that working with COVID patients increased the risk of transmitting the virus to his family living in the same house.

Abhinash Soni, 24, a business administration and economics student, said his parents are nervous about the COVID duty that they started more than a month ago.

The country’s healthcare system is under strain with a steep increase in the number of people exposed to COVID and a high rate of deaths. India recorded 263,533 new cases on May 18, and 4,329 deaths on May 17.

Ahmedabad city has the highest number of confirmed cases among Gujarat’s 34 districts. A government website stated the city has confirmed 226,029 cases of COVID-19 and 3,232 deaths as of May 17.

Public health and safety guidelines forced schools, colleges, small businesses, and other non-essential services to close and the four close friends spent evenings sitting under a tree talking discussing currents issues until they saw the request for volunteers on the internet. 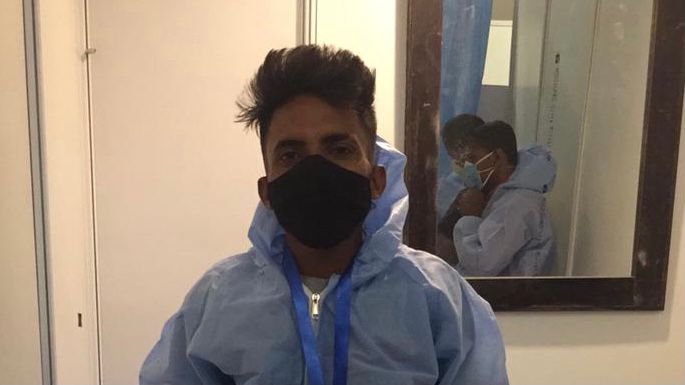 Abhinash Soni in the COVID-19 hospital in Ahmedabad city in India. He and three friends answered the call to volunteer to help doctors and nurses. Photo credit: Courtesy Abhinash Soni

“My mom and dad were concerned,” Soni said. He said he found performing the duties required difficult at first, such as changing diapers, taking patients to the toilet and wrapping dead bodies in layers of plastic.

“It was a little difficult for us but as the days passed, we were able to do it comfortably without feeling gross,” Soni said. “I have packed more than 100 dead bodies in the last 20 days.”

Another friend, Paresh Parmar, said there were mixed reactions when his family learned of his decision in serving COVID-19 patients. 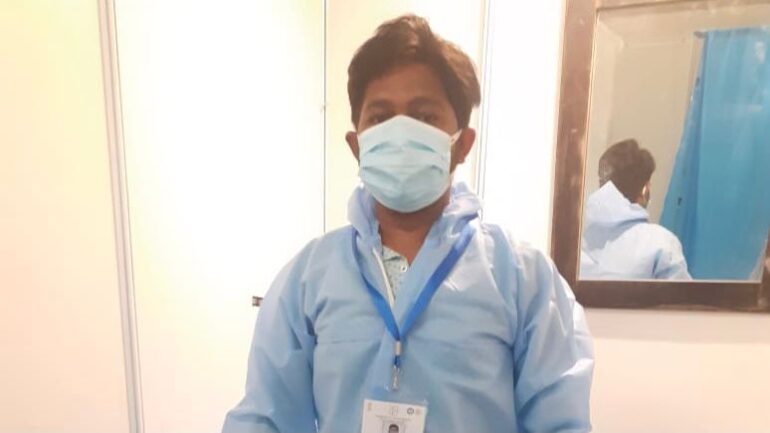 Paresh Parmar wearing PPE in the COVID-19 hospital in Ahmedabad city in Gujarat. He and three friends answered the call to volunteer to help doctors and nurses. Photo credit: Courtesy Paresh Parmar

“Some members in my family told me that you should never go, and other members encourage me to serve people in need,” Parmar said.

He said the only thing that keeps them going are the bonds of their friendship.

“Some (volunteers) have quit working here, but we are still here over a month (later), it’s only because we feel that I have my friend watching over my back,” Parmar said.

The four friends began volunteering in the general ward, where the conditions of the patients are better in comparison to the people in ICU. But they later took on some of the more difficult tasks, such as tending to the dead.

Sumeet Khatri, 24, a computer applications student, said he feels proud of himself while serving people with COVID-19.

“I know taking people to use the toilet is not a big deal, but when they say God bless you son, keeps me motivated feeling that my efforts are not in vain,” Khatri said. 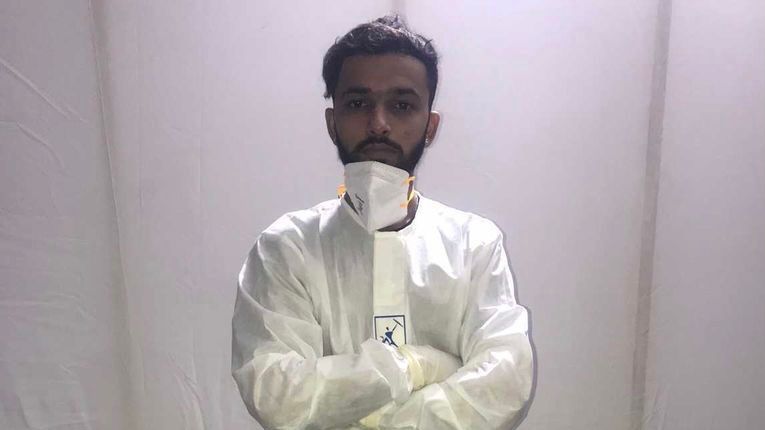 Sumeet Khatri wearing PPE while in the COVID hospital in Ahmedabad city in India. He and three friends answered the call to volunteer to help doctors and nurses. Photo credit: Courtesy Sumeet Khatri

Meanwhile, the Indo-Canada Chamber of Commerce and 80 other Canadian organizations organized a fundraising marathon called Oxygen For India. The country was faced an acute shortage of oxygen required for those suffering respiratory issues because of COVID-19.

Vijay Thomas, president of Indo-Canadian-Chamber of Commerce, said the effort raised $400,000 at the end of the first day. The event is going to continue for another three weeks on Sunday from 10 a.m. to 1 p.m.

Thomas said the organization wants to raise $2 million by the end of this four-week drive hosted on Facebook live, Prime Asia TV, and other channels. 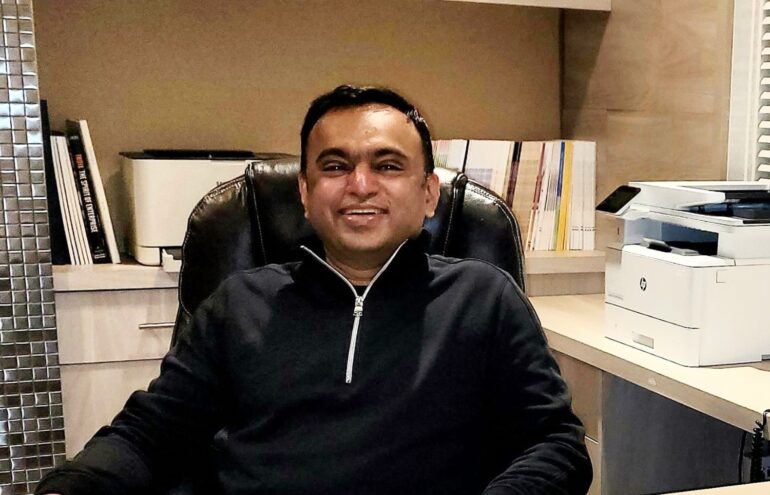 Vijay Thomas, president of Indo-Canada Chamber of Commerce, is the organizer of OXYGEN FOR INDIA, to help India fight the oxygen crisis. Photo credit: Screen Capture from weeklyvoice website

Ontario has donated a total of 5,000 ventilators to India manufactured by O-Two Medical Technologies in Brampton to help India coping with the oxygen crisis.

“Every level of government of Canada has stood very strongly with India,” Thomas said.

“Ontario will always stand shoulder to shoulder with our domestic and international partners, including our friends in India in their time of need, in the global fight against COVID-19,” Premier Doug Ford said.