“I like the fact that it’s a very bold design,” said Andrew Tumilty, a media relations and issues advisor at Waterfront Toronto.

Love Park is the latest attraction to Toronto’s waterfront initiative.

Waterfront Toronto was established in 2001 with the intent to revitalize the city’s waterfront. It is the largest urban revitalization project in North America with an emphasis on parks, public spaces, and reconnecting people to the waterfront. 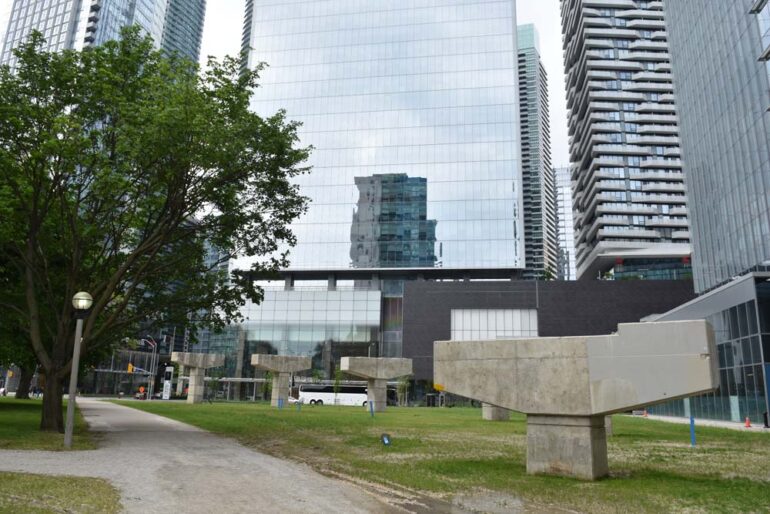 Love Park is at the intersection of high-density residences and office space which also attracts a high number of visitors, said Tom Davidson, the director of the waterfront initiative.

The park was designed by Claude Cormier et Associés, landscape architects based in Montreal.

The design reveals a heart-shaped pond at the centre of the park with a pink, glowing, heart-shaped light illuminating the pond. A fenced off-leash dog park will be included and a large amount of green space for public gatherings and picnics.

“I think the quality of the park will always be the essential element in terms of how people are drawn to it,” Davidson said.

The park is also being designed with wider walkways to accommodate pop-up markets, Tumilty said.

“The idea with Love Park is that we can create a better green space,” he said. “It’s a great name, and I always think of it as a little play on words as well, you know like love like we love parks.” 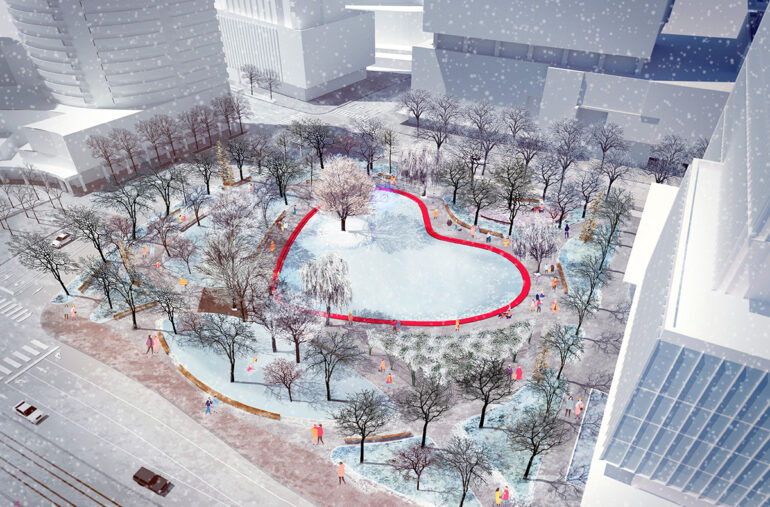 An artist's top down view of Love Park which will be built in Toronto's Queens Quay. Photo credit: Courtesy of Claude Cormier et Associes

The waterfront community actively participated in the project’s development.

A stakeholder advisory committee was established in 2019 for the design and development phase of the project. It included a mix of community representatives who gave feedback and guidance to Waterfront Toronto.

“We need to make sure that we’re working with the community sort of side by side at every step of the process,” Tumilty said.

Tumilty said having access to these green spaces is an important component of healthy living within a city that is peppered by industrial and condo buildings.

“What we’re trying to do overall, is to reconnect the city downtown to the waterfront, so it’s not just a space for the community,” he said. “It contributes [by] finding new ways to connect people back to the water.”

Waterfront Toronto’s mission is to try and build complete communities, including green spaces, open public parks, and trails for better access to the waterfront, Tumilty said.

The waterfront initiative might have not happened had Toronto won the bid for the Olympic games, he said.

“Even though the bid failed, the three orders of government saw a great deal of potential and original value in reclaiming what was post-industrial wasteland,” Tumilty said.

The funds were devoted to rejuvenating the waterfront.

The waterfront even has a connection to the Indigenous community.

“Before even the recent history of Toronto, [the waterfront] was a place for gathering and trade among Indigenous persons,” Davidson said.

However, the way the city implemented mass infrastructure projects eventually cut the people’s access to the lake, Davidson said.

Davidson said rejuvenating the waterfront, with projects like Love Park, is a critical element in building a better Toronto.

“It’s an opportunity to build the next type of city that we want from the ground up, which is accessible, sustainable, inclusive in terms of affordability, as well as having great public spaces,” he said.

Construction for Love Park is expected to begin soon with a target completion date of 2022.

When the park officially re-opens to the public, Tumilty expects it to be a popular social media destination.

“I think it’s going to be a very popular Instagram spot one day,” he said.