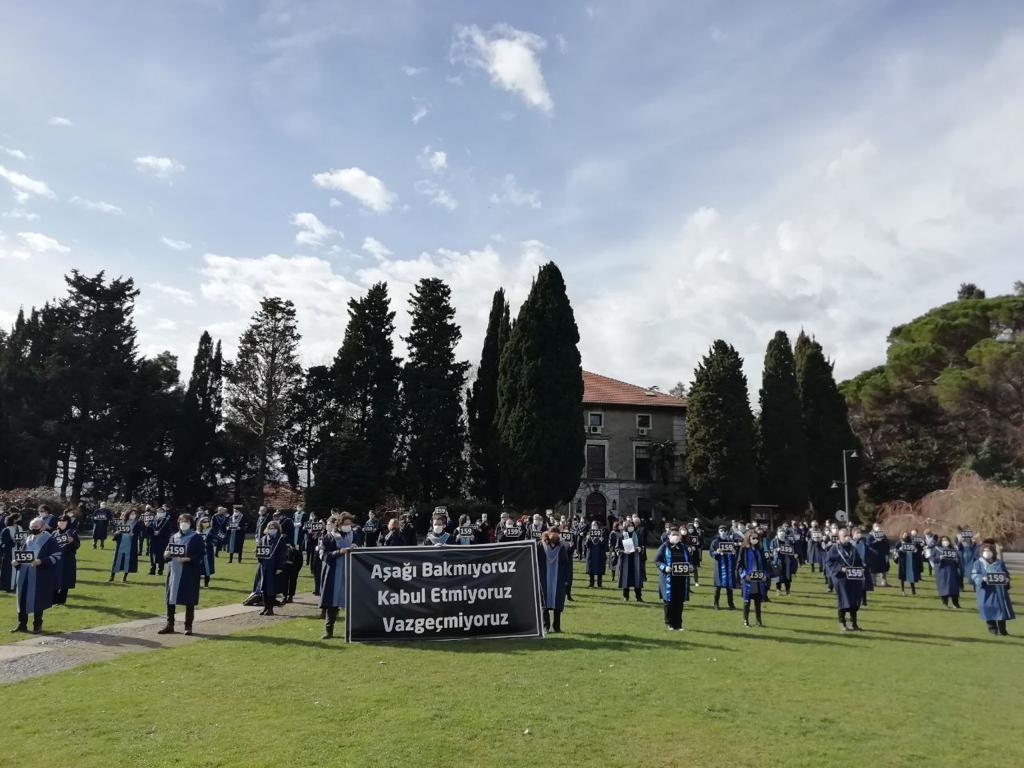 Threats of arrest and prosecution follow numerous protests after Erdogan appointed a rector, who has ties to the ruling party, to BAU, one of the country’s most prestigious schools, on Jan.1.

Students and faculty reacted to the selection of Melih Bulu by the government, breaking the tradition of faculty nominating and electing the head of the university.

The demonstrations rapidly spread across the country in support of BAU student demands to restore democracy at the school. The government responded with the arrests of more than 250 protestors in Istanbul and 69 students in the capital Ankara.

At least 51 students were referred to the court, while 25 students were charged with home-detention and banned from travelling abroad.

In response to the demonstrations, Erdogan called the protesting students terrorists.

“We are not terrorists. It’s ridiculous,” said Ece Sevik, a third-year student at BAU.

“There are more than 3,000 to 5,000 students who are participating in the protests. We do not belong to a political party or any terrorist group,” she said. “We are just students.”

The student of Management Information Systems at Bogazici has been participating since the peaceful protest began at the university campus.

“It is terrible. There has been a police blockade inside the campus since Jan. 4, and there is no walkway due to the surrounding police barricade,” she said.

“It looks like a war zone for us. We haven’t experienced this before,” Sevik said.

The Turkish penal code doesn’t allow police to enter schools unless the rector or manager allows them to intervene in case of an incident on campus.

“It was the first time police has entered the campus after 30 years. What kind of a rector is arresting students for demanding democracy,” Sevik said.

“The students are afraid of each other as well,” she added. “We don’t know anymore who is a student or a cop.”

“We are continuing to protest in front of the rector’s building,” Sevik said. “Some strange older adults, who don’t look like students, are always taking our videos. Yes, these are the police, and I’m afraid they are recording us.”

The new rector, Bulu, also ordered the closure of the LGBTQ+ students club for organizing an exhibition on campus as part of the protest. The exhibition included video artwork using two images of Islam’s most sacred site Kaaba in Mecca with the LGBTQ+ flag.

Bulu allowed police to raid the university’s LGBTI+ student club and announced an investigation for alleged terrorist propaganda after rainbow flags were found in the club room.

Olcay Atik, a second-year student Chemical at BAU, is one of the LGBTQ+ students.

“The government created the perception that a pervert flag was placed around the Kaaba. It’s horrible to be surrounded with fear,” he said.

“I am not feeling comfortable,” Atik said. “We benefited from the rights and freedoms in BAU that we could not have in the country. But they want to take it away from us.”

Atik is concerned about his and his friends’ safety and thinks they have become a target. “It’s too bad to leave us around such fear,” he said.

Atik said homophobia in Turkey is rising and hate of sexism is a very new situation.

“While we were living quietly and in isolation from society and our families, everything was okay for them. But we don’t want to live that way anymore. I want to hold my boyfriend’s hand in the street,” Atik said.

Students are just demanding the anti-democratic decisions be reversed, he said.

“There is a perception here that we are doing something horrible,” Atik said. “The government is trying to create a narrative that we are trying to harm democracy.”

A BAU professor, who didn’t want to be identified for fear of dismissal, told Humber News some university staff members have received phone calls, warning them to stop joining the demonstrations.

“Someone called and introduced themselves as a police or enforcement officers. They regularly call the students’ families. They say, ‘you should stop your kids, otherwise, it won’t end well,'” Atalay said.

He told Humber News many students were arrested illegally.

“The number of the investigation files was hidden, and we were not able to check students’ files,” Atalay said.

Some of the students were arrested for supporting the demonstration on their social media accounts.

“One of the students was taken under custody for allegedly using a Twitter account,” Atalay said. “The student was arrested for his tweets. There were no violent calls or insults in those tweets,”

He alleged students were interrogated while naked, and they were subjected to physical violence at the police station.

“They are using the naked query and physical violence for putting the person under mental pressure,” Atalay added. “It has been happening for five to six years. Government attempts to suppress democratic objections by the disproportionate force of the police.”

Students are also concerned about their future, he said.

“One of my clients said he will not be able to become a teacher now due to participation in the demonstration,” Atalay said.

Soylu described faculty and former rector Professor Dr. Üstün Ergüder as provocateurs for provoking students. He said they should stop protesting the government’s decision in a tweet on Feb. 21.

Feyzi Baban, a political studies professor at Trent University in Peterborough, graduated from Bogazici University and gives some courses as a guest professor.

“If you identify a group as a terrorist, it means you are questioning their legitimacy,” Baban said.

“For the past four to five years, If someone is opposed to the AKP government’s policies, they are directly labelled as terrorists,” he said. “Now, they are questioning the legitimacy of the rightful demands of the faculty staff and students in the country.”

Baban said the university has a reputation for respecting other religions, people of colour and ethnicity.

“It’s not a normal situation in a country with a democratic and legal order,” he said.