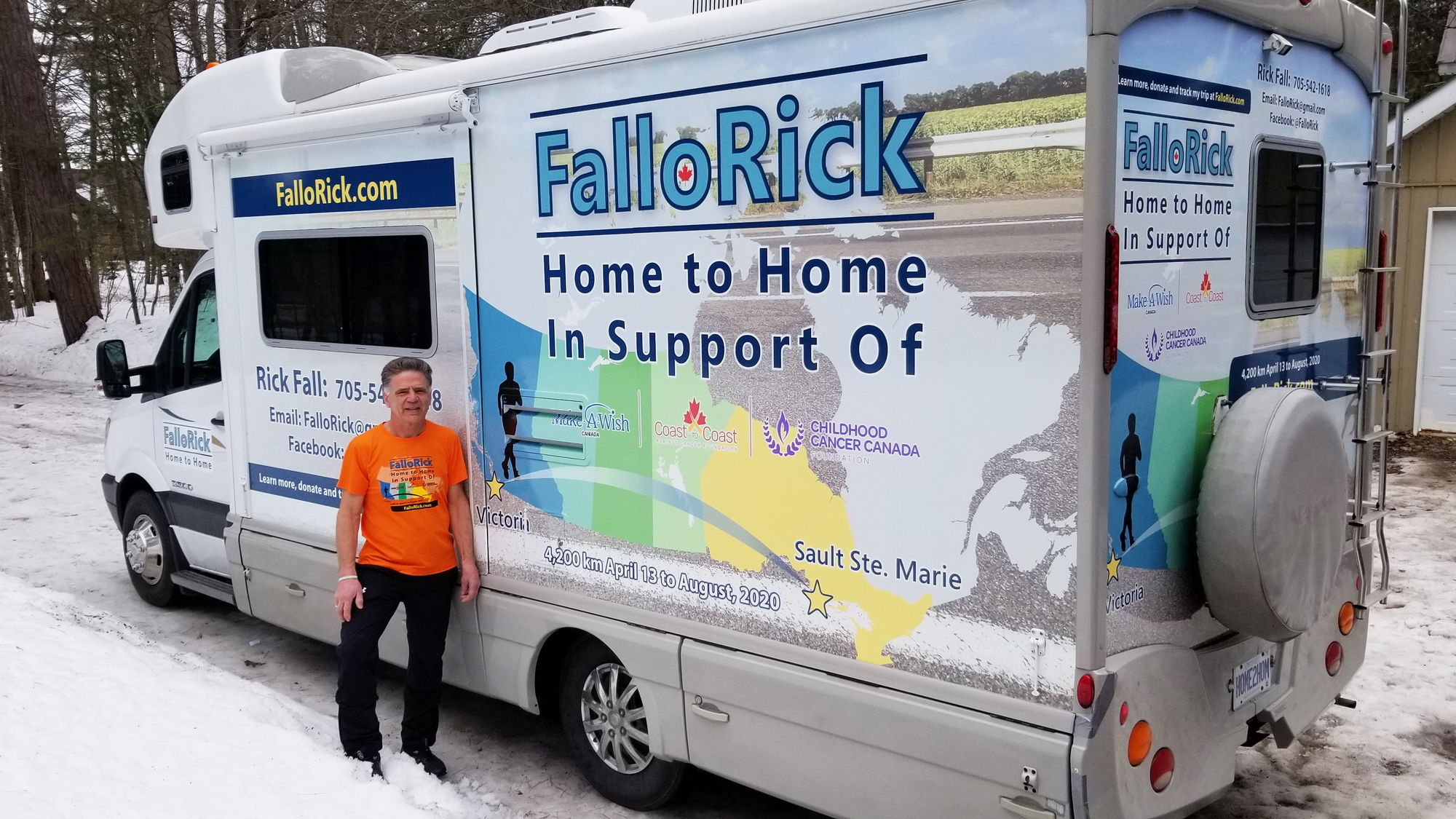 SAULT STE. MARIE, Ont. — A 10-year vision is finally coming into motion for Rick Fall, a local northern Ontario runner. For years now, he has had his heart set on the goal of running from Victoria, B.C., back to Sault Ste. Marie, Ont., in hopes of raising $300,000 for Make-A-Wish Foundation Canada and Childhood Cancer Canada.

He will be leaving Sault Ste. Marie on April 2 to make his journey out west and begin to run back on April 12. Fall plans to run 42 kilometres a day and to complete his goal by the end of summer.

“I’m hoping to get it done in 100 running days, averaging a marathon per day. It is approximately 4,200 kilometres from Victoria back to Sault Ste. Marie,” he said. “I’ve built in some rest days, and it will take about four to four and a half months for me to get it done.”

Fall will be evenly splitting the funds raised between both non-profits and says these two foundations are often left behind, and he wanted to do something about it.

“There are so many children that are in need,” he said. “Children’s research and children’s foundations don’t get nearly the recognition as much as adult cancer or research foundations do.

“I thought I should get out there and help the children,” Fall said. “Also, I’ve seen several children through the school system who have suffered from cancer.”

Currently working as a supply teacher, Fall has seen children bounce back from cancer and other childhood illnesses and some that don’t.

He has seen firsthand the impact these organizations can provide children — considering his niece, some years ago, was a recipient of a Make-A-Wish Foundation wish.

“Some of the children don’t have much life to live and may as well let their last years be enjoyable,” Falls said. “For some of them who are granted their wish, it gives them a reason to live further.

“Some have gone to live right through to adulthood because it gave them something to live for,” he said.

Once finalizing all the details, he reached out to Make-A-Wish Foundation.

Rachel Miller, the events senior coordinator, stated Fall’s contributions would have the potential to fulfill 15 wishes if he reaches his goal.

“The average cost of a wish is $10,000, and the impact of a wish is more than a ‘nice to have.’ It is an essential component of a child’s treatment protocol,” she said. “Seventy-one per cent of wish children who are now adults believe the wish experience contributed to saving their lives.”

Fall had previous experience with fundraisers and organizing events. Miller believes his drive to help others will give him the focus to complete this goal.

“Rick’s history and experience as a fundraiser for the Terry Fox Run shows his commitment to fundraising for a cause close to this heart, and we are so grateful to have him as a proud supporter of Make-A-Wish Canada,” she said.

“Having his support right now is really huge because a lot of foundations have been really hit by the pandemic. Our ability to fundraise has taken a really hard hit,” she said. “Having someone like Rick step forward with this opportunity and being willing to move forward with it and with everything going on.

“We’re just thrilled and ready to wish him the best of luck,” Motton said.

Fall will be accompanied by his wife for his journey and will be using an RV branded with his logo Fall-O-Rick Home-To-Home as his support vehicle.

He originally planned to start his endeavour in April 2020 but had to postpone it because of the pandemic. He does say the extra year provided him with more training time, and he feels better equipped for the journey than he did last year.

“I’ve had the extra year for training, and I feel a lot more physically ready this year than last year, but I think this is a doable thing,” Fall said. “If I think I can, the only way to know it is to actually get started.”