Juno Award nominations were announced earlier this month and a current Humber faculty member and an alumna were nominated for the annual music prize.

Jocelyn Gould, head of the Guitars Department at Humber College, earned her first Juno Award nomination for her first album Elegant Traveler in the Jazz Album of the Year category.

“It was a big surprise,” Gould said. “All my devices kind of started exploding. It wasn’t on my radar, I wasn’t expecting it.”

With it being her first nomination, it’s also Gould’s debut as a bandleader on the album which holds a deeper sentiment to her.

“For me, it’s a real lesson to apply for everything,” said Gould, who’s originally from Winnipeg. “When I submitted my record to the Junos, I was like, ‘I definitely won’t get this,’ but the fact that it’s my first is really encouraging.”

Gould flew to New York to record the album and recorded it in one sitting while having friends and musicians that she admired on the album.

“The whole thing was just kind of a whirlwind,” Gould said. “I flew out there, got up, and we rehearsed and recorded it in one afternoon in Brooklyn. It was really fun.”

Gould felt the influences of guitarists Wes Montgomery, Grant Green, Kenny Burrell and Joe Pass while making the record and worked to emulate them.

“I just would love to put the same spirit out through my playing that they put out,” Gould said. “They’re playing the same, just joy and spirit.”

Dione Taylor, a graduate of the Humber College Jazz program, was happy to have her album Spirits in the Water nominated for a Juno award in the Blues Album of the Year category.

“I was very honoured to be recognized for this body of work,” Taylor said. “I really am happy and grateful that people have been resonating with the songs.” 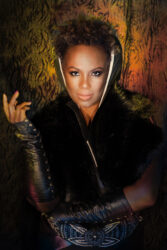 Dione Taylor had a feeling that her album would be recognized and received in a positive way. She was nominated for a Juno Award in the Blues Album of the Year category. Photo credit: CrilaPhoto

This is Taylor’s second Juno nomination. She nabbed her first nomination in 2005 for her debut jazz album Open Your Eyes.

“The first time, I wasn’t really expecting it because I was pretty new to the jazz scene,” Taylor said. “The fact that it got recognized nationally was really awesome. It gave me a definite boost of confidence.”

Spirits in the Water was the first time that Taylor decided to write a concept album.

“This was the first time establishing my prairie blues sound,” said Taylor, who was born in Regina. “It’s not necessarily autobiographical, but just writing songs about other people and other shared experiences, especially through the African-American point of view.”

Earlier this year, Taylor was nominated for numerous awards at the Maple Blues Awards and she was happy about the consistent recognition in the Blues category.

“I love that both organizations have recognized Spirits in the Water and have been really supportive in promoting it,” Taylor said.

Taylor plans to get to work on her next album and hopes to release new music and collaborate with others.

“It will definitely be in my signature prairie blues style,” Taylor said. “So, that means it’s going to be very folky and bluesy and songs from my heart.”

Moving forward, Gould plans to continue developing her compositional skills on her next record and take what she did on Elegant Traveler and building off that.

“As soon as I can, I’ll be doing my next record,” Gould said. “I just can’t wait to get it out there. The more music you put out, the more you learn. So, it’s really good to just do it as often as you can.”

The winners will be announced on May 16 at Scotiabank Arena in Toronto.