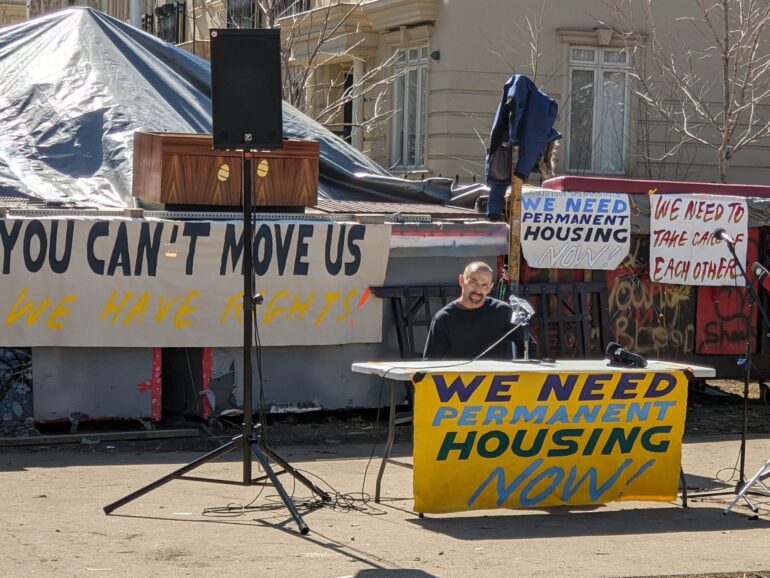 Domenico “Bubbles” Saxida is a resident of Alexandra Park’s homeless encampment. He spoke out against the city’s Pathway Inside program at an event on March 21. Photo credit: Tyler Cheese

A small group of people began gathering around a cluster of tents and tiny shelters in Alexandra Park at noon on Sunday, March 21.

Signs reading “You can’t move us!” and “We need permanent housing NOW!” hung in the spring sunlight as the Gardens at Queen townhomes loomed in the background.

A series of speakers made up of people experiencing homelessness and their advocates took to a makeshift podium as park-goers began to take notice.

Soon a crowd of around 200 people — community members, neighbours, families with dogs and children — had gathered to listen.

Domenico “Bubbles” Saxida was one of the speakers. He lives in the Alexandra Park encampment.

“It’s more safer out here than it is in any of the city shelters,” he told the crowd. “The city has done nothing but beligerate [sic], harass and threaten us.”

Many encampment residents are hesitant to go into temporary shelters because of the risk of COVID-19 outbreaks, Saxida said. 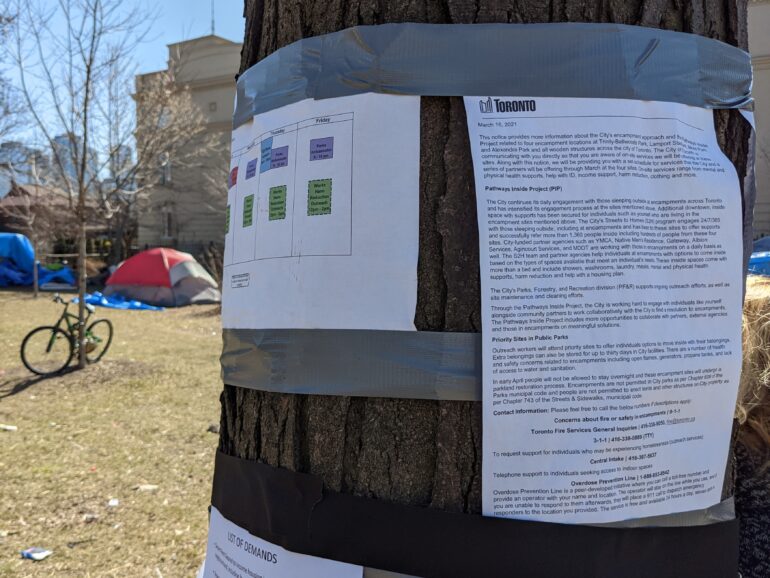 Toronto’s Pathway Inside program aims to relocate people living in four of the city’s most prominent homeless encampments. Residents have been told to relocate to a designated hotel shelter by April 6. Photo credit: Tyler Cheese

The purpose of this gathering, organized by the Encampment Support Network, was to condemn Toronto’s new Pathway Inside program.

The program was announced on March 16 to relocate outdoor residents in four of the city’s most prominent homeless encampments at Alexandra Park, Moss Park, Trinity Bellwoods and Lamport Stadium.

A hotel at 45 The Esplanade has been designated the new temporary shelter for people living in these encampments.

Residents of these four encampments have been told trespassing bylaws will be enforced starting on April 6.

Parkdale-High Park Councillor Gord Perks and three other city councillors released a joint statement alongside the new program, asserting the program is a step toward providing permanent housing for those experiencing homelessness.

“For someone to be housed or sheltered safely there are a lot of boxes you have to tick,” Perks told Humber News in an interview. “The encampments don’t tick a lot of those boxes.”

The biggest safety concern for city officials is fire, he said.

“We have already lost at least one life … due to the fact that the very setup of the encampments is not fire safe. In fact, it’s very fire dangerous,” Perks said.

But some of the speakers at the event in Alexandra Park didn’t feel hotel shelters are any safer.

Saxida told the crowd his best friend went to one and was never seen again.

“He died in a fire in his bed after taking some type of narcotic,” he said.

Perks said he’s unaware of any deaths caused by fire in any of the city’s shelters.

There has been at least one fire that caused critical injuries to an individual at a downtown hotel shelter on Dec. 26, 2020, according to multiple media reports. 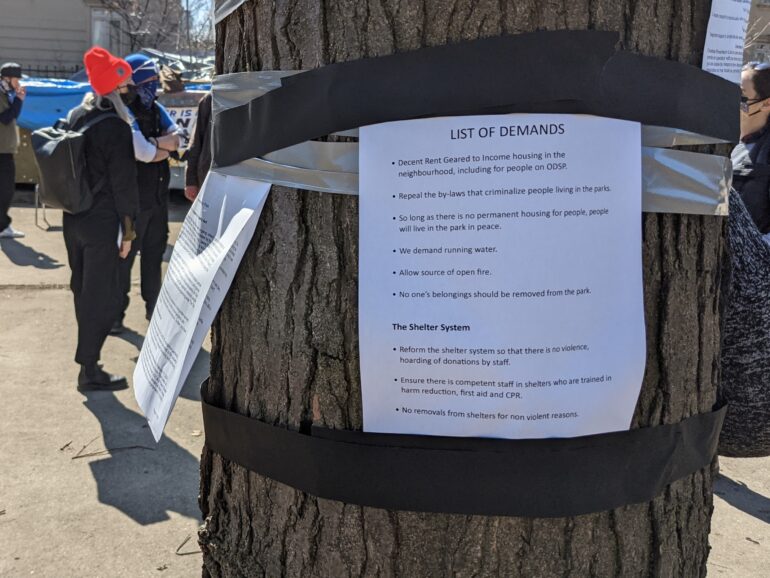 A list of demands taped to a tree near Alexandra Park’s homeless encampment. Residents and advocates are asking the city to improve park spaces and the shelter system. Photo credit: Tyler Cheese

J the Letter — or just J — the self-proclaimed mayor of Bruce Lee City, a section of the encampment in Trinity Bellwoods, told the crowd in Alexandra Park the city should provide permanent housing options for people experiencing homelessness. Temporary shelters and respite centres are not enough, he said.

“They want to put us into hotels to segregate us,” he said.

Lorraine Lam, an outreach worker at Sanctuary Toronto, agrees the city needs to do more.

“It’s clear that these programs are really just designed to move people away from these visible spaces,” she said in an interview.

Lam views the focus of the Pathway Inside program — removing encampments in four of the most prominent green spaces — as proof that the city’s priorities are misguided.

There have been instances of hotel shelters turning people away because they don’t meet certain requirements, she said.

Lam is concerned Pathway Inside will lead to gatekeeping, prioritizing people from these more visible encampments, and leaving other people out on the street while space is available.

She said city officials are “more concerned about their optics rather than actually helping.”

The new program needs to be scrapped completely and the city needs to put its efforts into creating permanent housing, Lam said.

But it’s not as easy as handing over the keys to a new apartment, Perks said.

There are many complex factors to consider and they differ depending on the individual in need, he said.

“The Pathway Inside program is very much designed to help each individual with whatever it is they need to succeed in stable housing,” the councillor said.

Perks pointed to larger issues at play in the ongoing conversation about homelessness in the city.

When it comes to encampment advocates, “there’s an extent to which we’re talking past each other,” Perks said.

He felt the focus on encampments distracts from the larger problem, which he identified as a lack of responsibility from the provincial government.

Perks called out the province for inadequacies in money for people on social support, a failure to provide legally mandated mental health support and an absence of meaningful investments in permanent housing.

He said those issues aren’t the centrepiece of the conversation, “even though they’re the centre of the root of the problem.”

The councillor invited advocates to work with the city to address these issues.

As for the encampment residents, some said they won’t be leaving anytime soon, including Saxida.

“I’m not moving,” he said. “Not until the government wakes up and starts taking care of these people.”