Twin tunnels dug for Kitchener GO under Highways 401 and 409

Two tunnels under Highways 401 and 409 to link Kitchener with Toronto’s Union Station were recently excavated as part of the transit network expansion around the Greater Toronto and Hamilton Area.

The $117 million effort by Metrolinx is to better connect Kitchener, Guelph, Georgetown, Brampton and Mississauga to downtown Toronto.

“The crews have been working hard to dig two tunnels under these highways so that we can add more service to core segments of the Kitchener GO Line,” said Caroline Mulroney, Ontario’s Minister of Transportation in a media release video on Feb. 11.

She said the project to deliver faster public transit is for when “life returns to normal and ridership increases.”

According to Metrolinx, the province’s transit authority in the GTHA, a big driver for the initiative comes from Kitchener’s rapid growth, the bustling tech sector in Waterloo next door and projections that has nine million people calling the GTHA home by 2041.

However, many commuters are skeptical about the project’s target deadlines.

Construction for the tunnels began on March 15, 2019, and they haven’t technically been completed.

The province expects “substantial completion for the 401 and 409 Tunnel Project” is expected by the second half of 2021.

Slavoljub Pesic is a financial analyst with BMO in downtown Toronto and a frequent GO Transit commuter from Waterloo.

“It’s a good idea, but let’s see when it’s actually done and ready to use. Right now my trip is pretty long so it gets tiring,” Pesic said. “Plus it feels like the GO is always under construction.”

Rohan Kapoor, an undergraduate student at Wilfrid Laurier University in Waterloo and commuter from Guelph, said Metrolinx and GO Transit do good work but disregard their timeline. 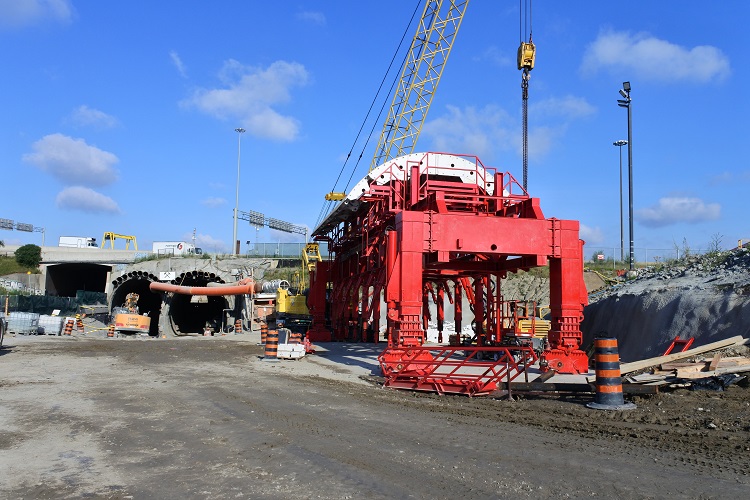 Construction of the rail tunnel beneath Highways 401 and 409. Photo credit: Courtesy Metrolinx

“Just look at Union Station. It’s been under construction for what, eight, nine years now? If this new Kitchener Line is done soon enough, hopefully, I can get to campus faster in the third and fourth year. Let’s see,” Kapoor said.

The $800-million Union Station Revitalization Project has been underway since 2009 and has repeatedly been delayed, to the dismay of commuters.

Walkway and platform closures, limited access between Front Street and the Great Hall and reduced accessibility areas have bogged down commuters like Pesic and Kapoor at Ontario’s busiest commuter hub.

“I really hope the Kitchener Line and tunnel project are different,” Kapoor said.

Metrolinx and Toronto Tunnel Partners constructed the 180-metre twin tunnels just three metres under the highways above, which support 21 lanes of live traffic.

“I want to applaud Toronto Tunnel Partners for the innovative work on the Highway 401 and 409 Rail Tunnel Project,” said Michael Lindsay, president and CEO of Infrastructure Ontario.

The province’s GO Transit Expansion program looks to provide a range of improvements across the network, including more all-day service in both directions system-wide (up to 6,000 services per week), more accessible stations and 30 per cent faster trains.