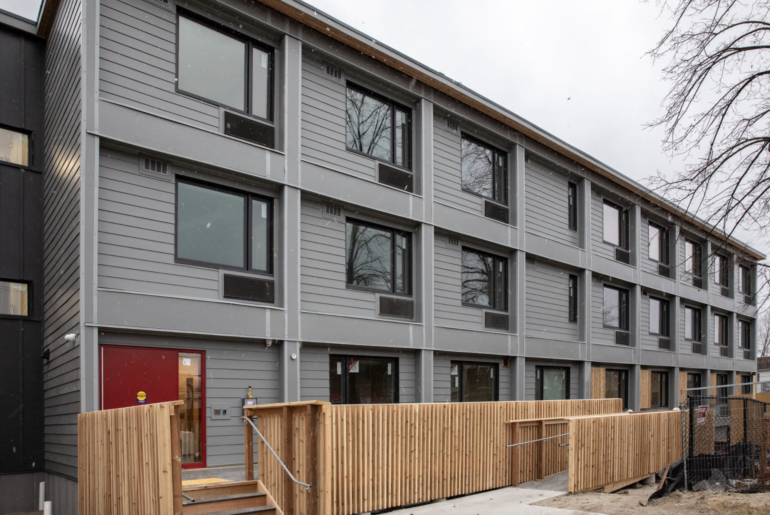 Exterior of a studio apartment at 321 Dovercourt Rd. (City of Toronto/Media Room)

Toronto has opened its second supportive modular home to help those experiencing homelessness.

The project at 321 Dovercourt Rd., in the Dundas Street West and Ossington Avenue area, is part of the first phase of the Modular Housing Initiative.

Toronto Mayor John Tory announced the city is providing 100 homes for residents between this site and the first part of the project at 11 Macy Ave. in the Victoria Park Road and Danforth Avenue area of Scarborough.

“We have at this site 44 studio apartments where tenants will have access to the support services but also the physical surroundings will include a dinning room, common room and a program space,” he said.

Twenty-five per cent of all modular homes are accessible and will provide 2/47 on-site staff to assist residents with daily living.

In phase one, 250 homes will be built. The City will see 150 additional homes built in phase two.

Site selections for the first two houses were implemented by the city in June 2020. Residents began to move in the first house last December and this past January in the second.

Both homes under the first phase were built under months. The City said modular houses are pre-fabricated and high-quality, which made construction faster.

“The whole point of modular housing is that it can be built in months, not years,” Tory said.

In an email statement to Humber News, the city’s Shelter, Support, and Housing Administration said 41 people who were encamped at Trinity-Bellwoods Park in west Toronto were referred to the new housing since September.

They said that from September 2020 to Feb.8, Albion Neighbourhood Services attended the encampment twice a week for a total of 46 times.

The number and size of encampments were growing since the advent of the pandemic.

The city’s Streets to Home team engaged daily with people sleeping outside.

The city has referred about 1,335 people to housing, hotels, shelters and safe indoor spaces — from these encampments between last spring and Feb.5.

“COVID-19 has weighted the need to get critical housing projects approved and completed faster,” said Parm Gill, the parliamentary assistant to Steve Clark, the Ontario Minister of Municipal Affairs and Housing.

Julie Dzerowicz, the Liberal MP for Davenport, said the housing plan will provide help to those exiting in Toronto’s shelter system.

“Through the federal government’s National Housing Strategy, we’re striving to reduce chronic homelessness by 50 per cent by 2027 to 2028,” she said. “With all levels of government working together, we know we can achieve this ambitious goal.”

The modular houses will be managed by Cota Health and The Neighbouring Group, both non-for-profit community organizations in Toronto.

Cota Health will help residents reconnect with the community by providing support services such as employment opportunities, primary and mental health care, income support programs, life skills training, and addiction counselling. The Neighbouring Group will serve as the property manager.

Community Liaison Committees will also be active in working to support residents in creating and maintaining relationships between the building operator and the other residents.