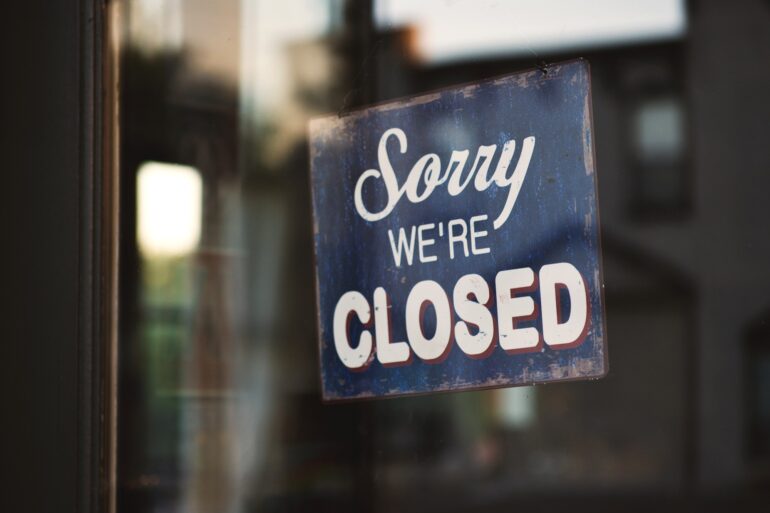 A local business unable to turn their closed sign to open after further lockdown measures in Peel and Toronto. (Mossholder/Upslash)

Toronto and Peel Region are remaining in lockdown for an additional two weeks, a government release said.

The two regions will stay in the grey zone, the fifth and most extreme measure in Premier Doug Ford’s colour-coded system, until March 8.

“There is a situation where we have more and more variants being detected,” Loh said in an email interview. “We have seen an increase in variants from five confirmed [cases] last week to over 50 confirmed this week.”

The proposal for a lockdown extension in Peel Region arose when a Mississauga condo was the result of a mass COVID-19 testing blitz over Valentine’s weekend.

Loh confirms that to date, Peel had 200 positive tests for variants of COVID-19.

Dr. Lawrence Loh speaking to the press regarding updates to COVID-19 in Brampton on Feb. 17. (City of Brampton Youtube)

Currently, there is no way to ensure Peel is seeing a consistent decline in new cases. The region lacks adequate testing, tracing, and treatment capacity, putting a greater strain on hospitals, he said.

“Our hospitals continue to be over capacity with patients being transferred over the province,” Loh said.

The letter argued that Toronto and Peel Region did not see a consistent downward trend in hospitalizations and that the regions continue to see pressures in their intensive care capacity and staffing.

Bearing in mind that various strains of COVID-19 are developing, such as a form of the virus mutating called B.1.427/B.1.429 in California, Loh is weary and aware the possibility a new mutation variant can occur locally.

“Should we not be careful in controlling transmission, homegrown variants could develop in Peel for sure,” he said.

As Loh prioritizes the safety of citizens in Peel, some residents disagree with the extension.

“It’s very depressing,” she said. “I’m really tired of looking at my four walls in my house. It’s kind of exhausting to be in the same place.”

Fernandez, from India, moved to Canada on a student visa for her studies last year. She intended to see and explore the GTA and create long-lasting memories. Unfortunately, the pandemic interfered with her plans.

“I just hope someday I can roam without a mask,” she said.

Meanwhile, Sandra Wasilewski, a first-year student at Humber’s Protection, Security, and Investigation program, is skeptical of the lockdown ending on March 8.

“They’re going to extend it to at least April, end of March if we’re lucky,” she said.

Toronto recently announced the cancellation of all in-person events until July 1.

Wasilewski is tired of the lockdown but will continue to follow the health protocols despite her wish to return to some sense of normalcy.

“It sucks,” she said. “But if everyone wants this whole thing to be done, then follow the rules. It’s not hard.”

Although residents like Fernandez and Wasilewski are upset about the extension, Loh remains hopeful it will not extend beyond March 8.

“A couple weeks extension gets us closer to spring weather,” he said. “Hopefully more available vaccines will start flowing and allow us to determine if the hospital and variant picture stabilizes.”