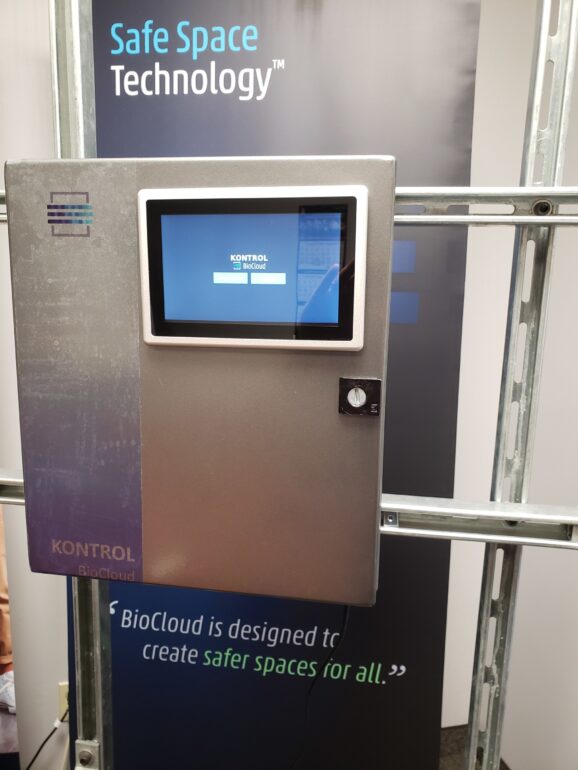 The Kontrol BioCloud detects COVID-19 particles in the air. The Ontario government has pledged $2 million to speed up development. (CNW Group/Kontrol Energy Corporation)

The Ontario government announced Feb. 4 it will provide funds to CEM Specialties Inc., a technology company that developed a sensor capable of detecting the presence of COVID-19.

The province will provide the company with $2 million to speed up its production of the COVID-19 detector device, called Kontrol BioCloud.

It is designed to monitor and detects the presence of the SARS-CoV-2 virus in the air. BioCloud works similarly as a smoke detecting device and it easy to operate.

“BioCloud seeks to provide an early detection mechanism with a silent alerting system. Just as smoke detectors and carbon monoxide detectors are now part of building safety, we have created BioCloud as an innovative viral detection technology to help get the economy and daily life back closer to normal,” said Paul Ghezzi, the CEO of Kontrol Technologies Corp.

“From day one, Ontario unleashed its innovation and manufacturing might in the fight against COVID-19, with businesses rolling out new innovations and products to help keep the frontlines and the general public safe,” he said.

BioCloud acts as a shield of protection that monitors the air in real-time in a crowded place such as schools, hospitals, workplaces, long-term care homes, and other places where the public gathers.

“[This] will help Ontario and the rest of the world successfully emerge from this pandemic,” Fedeli said.

Suzanne Tinglin, a professor of advanced nursing at York University, believes the technology would be crucial in hospital settings.

“If we have this system in place, it would look at ways to eradicate this situation a lot sooner,” Tinglin said.

Roger Christian, a father in Toronto said this device will make him feel much safer about his daughter being in school.

“It’s good to know that such devices are invented,” Christian said.

Schools should install BioCloud as soon as possible, he said.

More than 85 percent of the components are produced in London, Ontario. With the government’s funding, the production will grow to 20,000 units per month.

“We want to thank the Ontario government for their support for commercializing and accelerating production of BioCloud,” Ghezzi said.

Blessy Paul, of Toronto, has been attending online church services, as in-person gatherings are still banned. She thinks the device could speed up a return to the pews.

“I feel very excited to enjoy worship and go to church every Sunday after Biocloud is installed,” Paul said.

Expanding the production will create nearly 250 direct jobs and around 750 indirect jobs.

“We are proud to be a made-in Ontario technology and we are very pleased to be hiring and creating new jobs,” Ghezzi said.