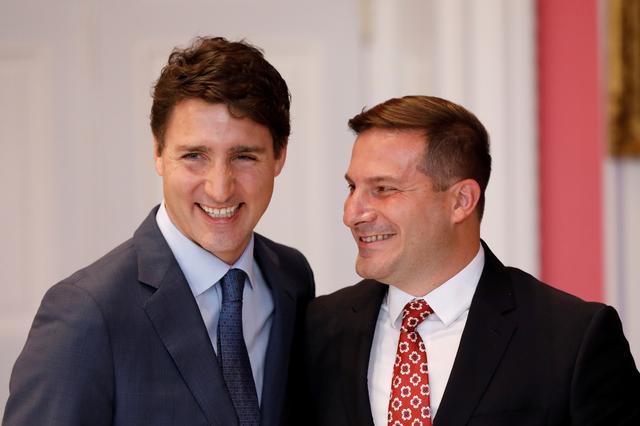 Marco Mendicino poses with Canada’s Prime Minister Justin Trudeau after being sworn-in as Minister of Immigration, Refugees and Citizenship during the presentation of Trudeau’s new cabinet, at Rideau Hall in Ottawa, Ontario, Canada November 20, 2019. (REUTERS/Blair Gable)

NEW DELHI — Canada launched a scheme for Hong Kong students and skilled workers to achieve a faster permanent residency status in the country.

The announcement follows rallies were became a common sight in the streets of Hong Kong, beginning in 2019, because of the imposition of new security laws Communist Chinese authorities.

To help Hong Kong residents, the U.K. government created a British National (Overseas) status for them in 1997, according to a U.K. Home Office immigration report.

The report said this was done so Hong Kong citizens could establish a form of British nationality.

“Beginning on Feb. 8 the citizens of Hong Kong with a Canadian or an equivalent foreign degree or diploma in the last five years will be able to apply for work permits in Canada,” he said.

According to the IRCC news release, this new scheme will soon allow citizens of Hong Kong to apply for work permits in the country.

The work permits once obtained will add to their valuable employment experience and contribute to Canada’s economy, press release said.

The measures taken are only applicable to the citizens who have a Hong Kong special administrative region or British National Overseas passport, the release said.

The press release said spouses or partners who are eligible, and dependent children may also apply for a study or work permit.

“Canada has a robust asylum system,” Mendicino said. “It is internationally recognized for defending human rights and offering safe harbour to the world’s most vulnerable.

“The one year waiting period for failed asylums for people from Hong Kong will be waived off and quicker pre-removal assessments can be accessed by them,” Mendicino said.

The press release stated the permits will be valid for three years and Hong Kong citizens who are now in the country as students, workers or visitors may apply for it.

Hong Kong citizens applying from abroad but might be subjected to the ongoing travel restrictions, press release said.

The government is also planning to implement two other pathways for permanent residence for younger citizens of Hong Kong, press release said.

According to the release, the first will be for people with minimum one year of work experience who meet the language and educational requirements.

The second will be for those who have graduated from a post-secondary institute in the country, press release said.