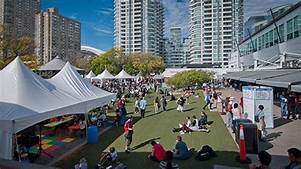 In previous years, Word On The Street, has taken place at Queens’ Park and the Harbourfront. (Nathalie Leveille)

Every fall the Canadian writing community has found a home at the Word On The Street Literary Festival where they can share their stories in order to celebrate the art of storytelling.

WOTS has hosted its first virtual event in its 31-year-history last weekend where the literary works and stories of marginalized groups reigned supreme.

These two books primarily focused on the authors’ experiences through addiction and inter-generational trauma.

This event, along with The City Imagines helped set the stage for a wave of women, members of the LGBTQ+ community, people of colour, and people who have disabilities to share their literary works that had to do with challenges their communities face

In addition to YouTube live streams, there were discussions between festival viewers and professionals in the writing and publishing industries. The digital marketplace allowed attendees to buy their favourite books and discover new authors.

“We have folks across the neurodiversity spectrum contributing to the books,” said Steven Andrews, an employee at Toronto Comix Press. “There are also people from the LGBTQ+ and Indigenous communities on the team as well.”

Wayward Kindred is one of Toronto Comix Press’ new comic anthologies. Their website describes Wayward Kindred as short comics about starring supernatural families with stories ranging from the gruesome to the adorable.

Many of the team members who collaborate on the comic are disabled and challenge social stigma by pursuing work in the comic industry.

On the other side of the literary publishing spectrum, Book*hug Press is a 16-year-old independent traditional publisher helping fiction, nonfiction, and poetry writers publish their books at Word On The Street’s digital marketplace.

Hazel Millar, Co-publisher at Book*hug Press said the Press still managed to contribute to the festival despite going online.

“We have several authors for the festival programming,” said Miller. “We also have our digital booth, all set up and it’s running.”

Miller said that she meets with the WOTS programming team every year, and shows them what new books Book*hug press has in its roster.

“Through that, they review everything I send them,” she said. “If something feels like a good fit for their programming, they will invite one or more of the authors to be part of the programming.”

Miller also has a personal link to the WOTS literary festival as she used to go as a visitor with her son when the festival just started out on Queen St.

She encourages aspiring authors to just write their books, and to get them out there.

Andrews also encourages aspiring comic book creators to stay active on the internet and social media. He suggests trying new writing forms like Instagram comics and said there are a lot of opportunities in the comics and animation industries across Canada.