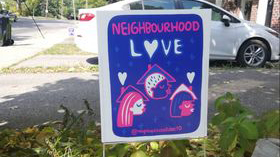 Neighbors in South Etobicoke show their support by putting the lawn sign.

Residents in South Etobicoke signed up to have their garage doors painted in support of a local homeowner who received hate mail for commissioning an artist to paint a mural on her garage door.

Natalie Bochenska, known as Natalie Very B., the Toronto artist who painted the garage door was shocked and said that she doesn’t know why someone would write the letter.

The mural in question features a night sky, constellations and moon above yellow hills.

“They called the garage ghetto,” said Bochenska. The note also accused the homeowner of lowering the property value in the neighbourhood.

She thinks the mural caught the neighbours’ attention because it stood out among the typical beige garage doors, but “it doesn’t produce a bad message in any way,” she said.

The mural and viral hate letter caught the attention of Bochenska’s friends in the muralist community.

Julii McMillan, Toronto artist and a co-founder of the Neighbourhood Love, saw the artist’s work shared online without credit and reached out to media platforms to inform them.

They decided to donate their skills to paint murals for neighbours who want to show their support.

McMillan said that the neighbours in the targeted area will have the opportunity to show that they don’t agree with the anonymous letter.

The project will run this weekend and already has 20 applicants who want their garage door painted.

“We’re a community in and of ourselves, and we were standing up for each other,” McMillan said.

Neighbours can also have their mailboxes painted or add lawn signs to their yard to show support if they don’t want to paint their garage.

Neighbourhood Love raised nearly $2,000 on GoFundMe and McMillan said that The STEPS Initiative and Street Art Toronto have both stepped forward to offer support.