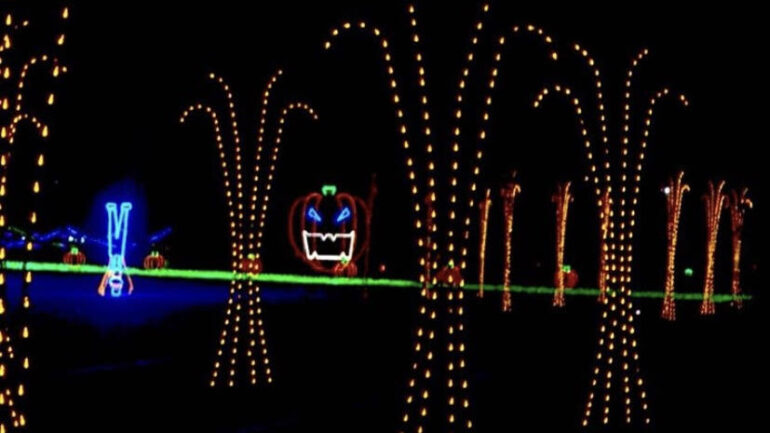 While most of the Halloween festivals and events are being cancelled, Halloween Nights of Lights is allowing GTA residents to celebrate the spooky season.

It is an immersive Halloween lights drive-thru festival that features a tunnel and interactive display. The socially distant event uses 700,000 LED lights to create an exciting display.

The festival opened on Oct. 1 in Vaughan, near Keele Street and Steeles Avenue West, and welcomed their first visitors before the end-of-the-month rush.

Olivera Pavlovic, the event director, said that the Nights of Lights was inspired by the Christmas lights festivals that get so much attention and love.

“We thought it would be a very fun seasonal thing and given the time for things safe to do,” she said.

Pavlovic said this event is so unique not only because it is fully contactless and safe, but also because it was never done before anywhere in Canada.

The lights festival synchronizes lights to music, which has a custom playlist with upbeat spooky Halloween songs, she said.

“It’s sort of everyone’s favourite Halloween anthem, but with a bit of a twist,” the event director said.

The event organizers are planning to donate $50,000 from the ticket sales to Epilepsy Toronto, a 60-year-old agency that provides counselling and support for people who live with the neurological disorder and their families.

Geoff Bobb, the Executive Director of Epilepsy Toronto, said the agency doesn’t receive donations from events very often, and usually relies on their own events, foundations and government funds.

“It’s not often that somebody is doing an event and making us a recipient so we’re quite honoured,” Bobb said.

Pavlovic shared that the idea to donate to Epilepsy Toronto was a personal decision; she has a friend whose child has seizures.

“My heart goes out to all parents that are facing such challenges,” Pavlovic said.

Halloween Nights of Lights will be open until Nov. 1, for both kids and adults to experience Halloween safely.