Jays lose to Rays 3-1 due to poor hitting 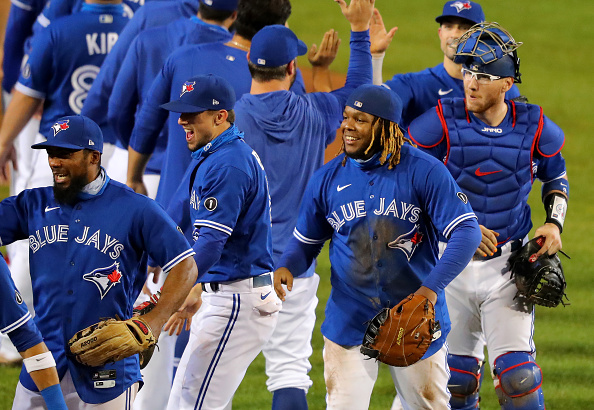 BUFFALO, NY - SEPTEMBER 24: The Toronto Blue Jays celebrate a win against the New York Yankees at Sahlen Field and celebrate a 2020 postseason berth on September 24, 2020 in Buffalo, New York. The Blue Jays are the home team due to the Canadian government's policy on COVID-19, which prevents them from playing in their home stadium in Canada. Blue Jays beat the Yankees 4 to 1. (Photo by Timothy T Ludwig/Getty Images)

The Toronto Blue Jays lost the first game of their wild-card series against The Tampa Bay Rays last night to a score of 3-1.

Toronto’s record against The Rays was 4-6 during the regular season, The Jays lost four out of six games against the Rays by one run.

The Jays are facing an elimination game tomorrow, this year the Wild-Card series is the best two out of three games.

The Blue Jays had 30 at-bats and only five hits in yesterday’s game. In addition, they had one run batted in, 12 runners left on base and a total of 12 strikeouts.

The Jays had 88 Homeruns in the 2020 regular season, the top three hitters were Teoscar Hernandez with 16 Homers, Randal Grichuk with 12 and Lourdes Gurriel Jr. with 11.

During the game, The Jays had multiple chances of runners in scoring position but were unable to capitalize due to the Rays’ strong defence.

In addition, The Jays had a team batting average of 255 for the 2020 season leaving them on the eleventh spot for the hitting ranking. Also, the team finished with 516 hits, 288 runs batted in, 508 strikeouts and 325 on-base percentage.

The Blue Jays finished with a 32-28 regular-season record and The Jays were the eighth and final seed.

The last time The Jays made the playoffs was in 2016 when they finished as one of the Wild-Card teams with an 89-73 regular-season record.

The Jays were eliminated by the Cleveland Indians on the 2016 American League Championship Series in which they lost the series 4-1.

For the last three years, The Jays finished fourth in the American League East Division. Also, they have not won more than 80 games since the 2016 season.