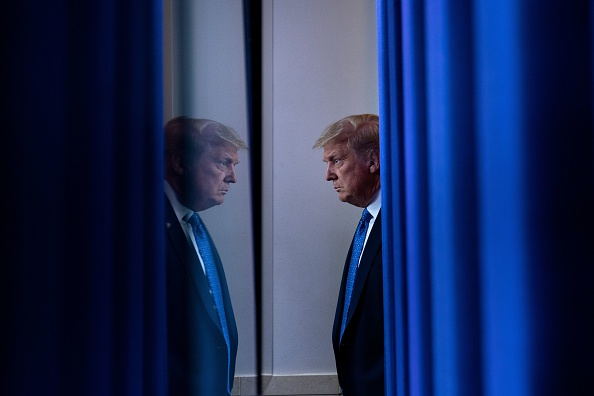 US President Donald Trump arrives to speak to the press ahead of the renewed briefing of the Coronavirus Task Force in the Brady Briefing Room of the White House in Washington, DC, on July 22, 2020. (Brendan Smialowski / AFP)

Donald Trump returned to the White House three days after he was admitted to Walter Reed Medical Centre after being diagnosed with COVID-19.

Shortly after his return, in a Twitter video, the president told Americans not to be afraid of the virus that has killed more than a million people worldwide.

“In returning to the White House, President Trump is trying to project a sense of strength, which I assume he believes would be a political benefit as an incumbent president seeking to install confidence,” Cohen said.

Cohen said Trump’s actions could completely backfire if independents see his decision to leave the hospital in a negative way because he is completely ignoring health guidelines.

Trump furthered angered many after removing his mask in front of cameras.

“Obviously, anytime the president is unable to serve, even for a for a short time, its a big deal. Usually, though , there’s a good bit of warning ahead of time, at least in the case of planned medical procedures, ” said Daniel Bennett, an American politics professor at John Brown University

Cohen said that the White House needs be honest with Americans about the President’s health.

“He wouldn’t have stayed overnight at Walter Reed in the middle of a contested election if it wasn’t serious, “Cohen said.