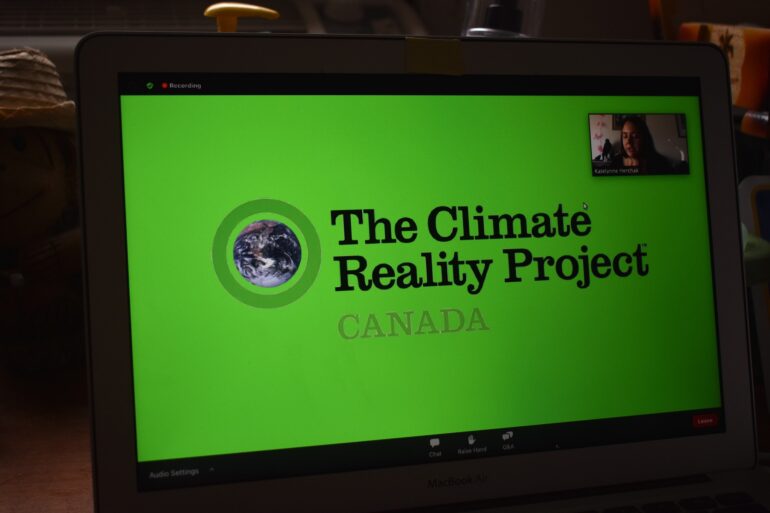 A Canadian climate organization has held a virtual meeting to speak with the youth of Canada on our climate crises. (Melanie Valente-Leite)

Climate change has been a topic that has been circulating for years, yet Canadian youth seem to feel dismissed when speaking out for their future.

“You’re just a kid. You don’t know what you’re talking about. Some of the things I hear all the time,” said Sophia Mathur, a 13-year-old activist in Sudbury, Ont.

It is no surprise many youths have dealt with challenges like Mathur while fighting for climate change due to their age.

Even with those provocations, that has not discouraged youth from speaking their truth against politicians and leaders on the climate injustices they have promoted.

“It affects generations to come,” said Caroline Vartanian, a 21-year-old student in Toronto. “Ecosystems are collapsing, glaciers are melting, and forests are up in flames. Our home is dying.”

The Climate Reality Project, a Canadian charity organization, hosted a virtual panel on Sept. 24 with guest speakers from across Canada to speak about Earth’s climate crisis.

The Project collaborated with several organizations such as YesBC, an environmental group based in B.C., to educate Canadians about the science and impact of climate change, as well as providing ideas on how to fix issues here in Canada.

Judy Fainstein, director of Operations for YesBC, said it is essential for Canadian youth to be involved as much as possible, despite resistance from older generations.

“I can’t stress how important it is for youth voices to be heard. You are the largest demographic, and you will change everything,” Fainstein said. “The work that you’re doing is so important.”

Fridays For Future Toronto, the local chapter of an international organization of a climate strike, said Canadians must understand the fight for climate change is a universal issue and is not limited to the country.

“The world around us is ever-changing, especially now. I can’t think of a perfect time for action to be done.” Vartanian said.

The United Nations Development Programme reported nearly half a million youth worldwide have taken action on climate change. They contributed through Small Grant Program (SGP) projects in their schools, home, and communities to not only help with effort but by spreading awareness in their communities.

Activists, like Vartanian and Mathur, want to make clear that no matter the age, no one is ever too young to help in their local community, even by merely speaking on the topic and educating others.

“I am not telling you that I am an expert. I am just spreading the word that there is a climate crisis, and we need to listen,” Mathur said.