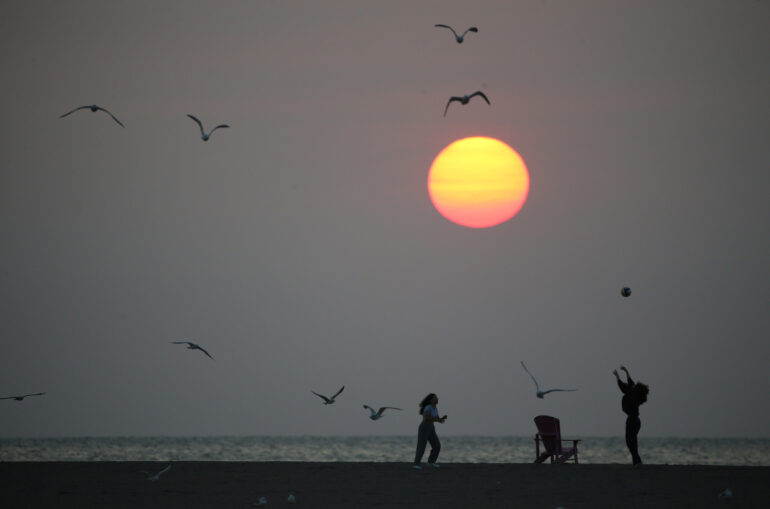 The wildfire smoke created hazy effects to the skies over Lake Ontario and Toronto beaches.

Smoke from the raging wildfires on the U.S. west coast has traveled through the American Midwest, and is now making an appearance in the skies of southern Ontario and some parts of Toronto.

“The sky had taken on a slightly grey colour. It almost looked like clouds, but the weather report said clear skies,” said Brady Steeper, a resident living in a condo in midtown Toronto.

Steeper had many friends in different parts of the western U.S. who reached out and shared some of their traumatizing experiences of difficulty breathing from the many days of haze and ash.

Another friend broke into tears after seeing a patch of blue sky, a sign that the air was moving, she said.

Wildfires are claiming millions of hectares in California, Oregon and Washington state.

“It’s such a stark reminder that we only have one planet for us all to live on. Environmental issues don’t just impact one place,” Steeper said.

The smoke has crossed over six different provinces in Canada, and covered the whole city of Vancouver on Monday. A Monday tweet by Canada Post stated it stopped delivering to seven areas for the day because of the unsafe conditions for the drivers.

Teachers’ unions urged provincial officials to close schools after a seeing the wildfire smoke, risking of their health from the dangerous air quality, and the COVID-19 pandemic.

“Teachers and students should not be in crowded classes with no ventilation or fresh air,” the B.C. Teachers Federation said on Twitter Sunday night.

While smoke conditions for Toronto may look like another Instagram post, causing the sky to appear hazy with an orange hue during sunsets, there was nothing to worry about, said David Phillips, a senior climatologist for Environment and Climate Change Canada.

“It doesn’t smell like a campfire in Toronto,” Phillips said. “Although the visual is there, the impacts of people’s health are not.”

While Torontonians should worry if the smoke drops to street level, he said. But that would require the pressure to decrease significantly, Philips said.

Some of that upper smoke might have shielded the sun, causing the weather to cool, which may have caused the early fall temperatures, Phillips said.

“I think it’s more of a conversation piece, but not a health issue for us,” he said.