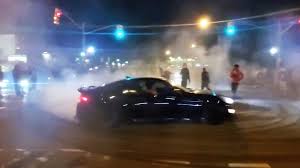 A car is doing doughnuts in the street. Photo credit: https://www.680news.com/2020/09/15/toronto-police-investigating-after-dangerous-driving-stunt-shared-online/

Toronto Police are cracking down on illegal stunt drivers after videos posted on Twitter alerted authorities to risky driving in the city.

Footage from one of three local meet-ups at Kennedy Rd and Progress Ave hit YouTube and other social media sites this past weekend, showing evidence of drivers committing dangerous stunts and creating loud disturbances.

Police were called and reported via Twitter seeing over 100 vehicles travelling over 100 km/h and people not obeying social distancing rules.

“Stunt driving is extremely dangerous,” police correspondent Michelle Flannery said. “This could result in serious injury or even fatalities.”

The COVID-19 lockdown emptied streets through early spring, resulting in an increase of stunt driving incidents and a spike in charges. Police have issued more than 700 stunt driving-related charges, doubling from 332 charges last year.

“Our Vision Zero Enforcement team’s focus is specifically on drivers committing collision-causing behaviours such as speeding,” she said. “There are at least two active investigations into events from the weekend. Video footage has been recovered and is being reviewed.”

Police believe there’s a link between the three stunt driving meet-ups, and speculate that the same set of drivers are alternating spots.

Drivers such as 23-year-old Khajuan Douglas from Etobicoke, are relieved that police are looking into it.

“They’ve been happening for a while so I was surprised and happy that they were doing something about it now,” Douglas said.

“We’re in a pandemic with cases still being developed every day. It doesn’t make sense that we’re doing stunts like that when we’re worrying about other things at the moment,” he said.