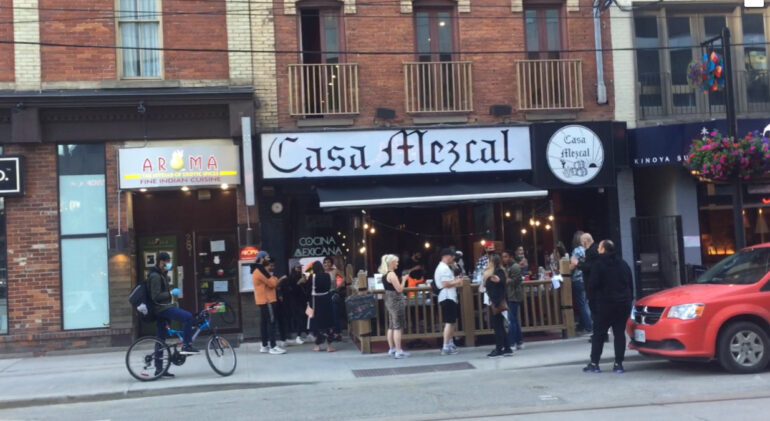 Casa Mezcal, near King St. West and John St., pictured here in July 2020, was ordered closed by the City of Toronto. (Google Maps)

The province announced strict changes for hospitality businesses in Toronto as the number COVID-19 infections indicate the approach of a second wave.

The province’s projections show infections rising to 1,000 a day during the first half of October. Restaurants and bars’ last calls have been moved up to 11 p.m.

King Taps, MARBL, Casa Mezcal, and Regulars announced on their social media platforms that they will remain closed until further notice. The city will allow them reopen after they attain the COVID-19 measures to protect both staff and the public.

Gustavo Patzan, a host at Regulars, said two staff members who worked from Aug. 13 to Aug. 22 were tested and went into isolation when they weren’t feeling well.

“All regulations were followed, as well as proper tracing,” he said. “We were notified by public health about the infected staff.

“Our first priority is to make sure our clients feel safe and be honest with them. We had to let our clients know about the situation and closed down on Sunday, Sept. 27, for deep cleaning,” Patzan said.

Dr. Eileen de Villa, medical officer of health for the City of Toronto, said in a press release their investigation reported some of the employees infected with COVID-19 were working at more than one of the four establishments.

“In some instances, we identified situations where the staff was working while ill,” she said at a media conference on Sept. 25. “We also became aware of concerns that staff was being pressured to work while ill.”

De Villa said one of the business served food buffet style, which is still prohibited under the regulations to control the spread of COVID-19.

Baro, another restaurant on King not included in the closure list, decided to voluntarily close on Sept. 23 after staff members tested positive for the cornavirus.

The closure allowed for deep cleaning of all four floors of the establishment but also to allow staff time to get tested and provide a clean bill of health before returning to work.

“We are very attuned with government announcements and know that this increase in cases province-wide may lead to more restrictions and we will be listening carefully for those directives as they happen,” said Laura Silver, spokesperson for Baro.

James Rillet, vice president of Restaurants Canada, expressed concern about the industry’s future : “We have been calling for the government to continue all of the backstops that they had put into place throughout the pandemic.”

The public health department continues to encourage social distancing and masks to contain the spread.