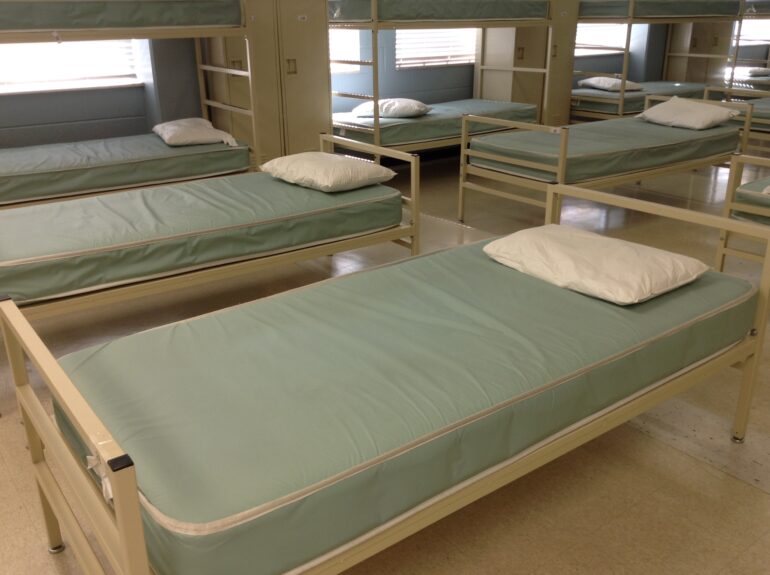 A coalition of homeless advocates are returning to court Thursday seeking the city and province comply with a July court order to make shelters safe.

“The City of Toronto is putting the lives of those experiencing homelessness as well as shelter workers at risk by failing to meet minimum physical distancing standards,” the group said in a statement issued Tuesday morning.

The coalition consists of a variety of organizations, including the Sanctuary Ministries, Advocacy for Tenants Ontario, and the Black Legal Action Centre.

They came together in April and brought the city and Ontario to court as the virus spread became more prevalent in shared living spaces, leaving many shelter clients with no choice but to expose themselves to the virus.

An interim lawsuit agreement ensured minimum distancing within shelters, make shelter beds available to all clients and release regular reports on its efforts to ensure distancing.

As the number of COVID-19 cases rise again, the advocates are continuing to fight on behalf of the homeless people in the city that rely on shelter systems.

The coalition said the agreement announced by the city on June 15 to ensure there was a two-metre space between shelter beds was not met.

“We have gathered evidence showing that they have not met compliance that they said they would and all of that can be followed in court Thursday,” said Cathy Crowe, a street nurse and the leading voice in advocating for homeless rights for over two decades.

She spends her time over the period of the pandemic, by writing monthly blog posts on her website. Crowe continues her advocacy by keeping chronicles of the current battles of homeless people.

Crowe has been writing monthly blog posts during the pandemic, keeping chronicles of the current battles homeless people face.

As of Tuesday, there have been 45 COVID-19 outbreaks in the Toronto shelter system due to overcrowding and lack of testing.

“We are all now bracing for winter and the second wave.” Doug Johnson Hatlem, a pastor with the Sanctuary Ministries of Toronto, said in a statement.

The city’s Shelter, Support, and Housing Administration proposed a plan earlier this month to lease and purchase empty buildings and offices to turn into permanent housing units.

Crowe said that none of it would happen fast enough and that a one-bedroom, one person per room should be developed.

“The housing bills that they’re talking about doing, there are no numbers in their timeline. The priority has got to be to open up more shelters because there are so many encampments outside,” she said.

Mayor John Tory in his press conference on Monday said there are no simple answers.

“We are really trying to deal with this but what we really need over the long-term is a proper supportive housing strategy for people with mental health issues and addictions issues,” Tory said.

“Mayor John Tory talks about how many people they’ve gotten into housing, but you know (encampments) is obviously a nightmare,” Crowe said.

“Even as we return to court to ensure minimum public health standards in shelters, we know that the real solution is safe, permanent housing for all. Rather than scrambling to make it look like they had met the terms of their agreement,” the group said in its statement.

The coalition group said the city should work with them to find long-term solutions.