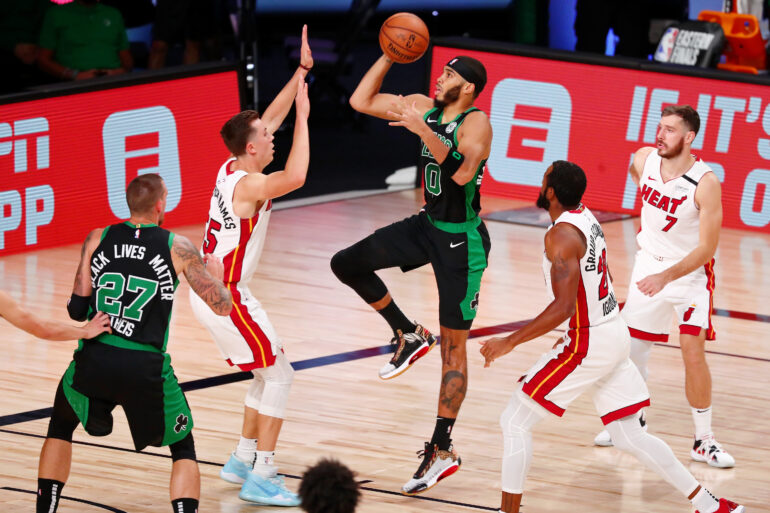 The 2020 NBA season has been full of surprises, and the playoff bubble continues to produce some shocking moments for fans around the world. Perhaps none more so than the Eastern Conference Finals.

This is the first year neither a first nor second seed are fighting to represent the east in the NBA finals.

Instead, it will be the fifth seed Miami Heat, who disposed of the conference-leading Milwaukee Bucks in five games, facing the third seed Boston Celtics, who broke the hearts of Toronto basketball fans by knocking out the second seed Toronto Raptors in seven games.

The Heat won game one of the series in thrilling fashion, with Bam Adebayo’s massive block of Jayson Tatum’s tying layup securing them a 117-114 victory in overtime.

Adding onto the list of peculiarities for this series is the fact that because the playoffs are taking place in the Orlando, Florida bubble, no team has the usually crucial home-court advantage.

Gabriel Gyamfi, a former Division One basketball player out of Maryland Eastern Shore, knows how big of a change no one having home court will be.

“Home court is really important in basketball, there’s such thing as hostile environments for away teams,” Gyamfi told Humber News.

“Just being able to play in front of your fans can give you a boost but also playing in front of another teams crowd can also be challenging.”

Boston will be relying on their 22-year-old phenom Jayson Tatum to continue his meteoric rise if they hope to dispatch Jimmy Butler’s Heat. The Celtic forward has had the fourth most games with at least 20 plus points in the playoffs before turning 23.

“Tatum can turn the corner and become deadly in open space either scoring or creating for others,” said RaptorsHQ writer Josh Kern.

The Heat meanwhile are hoping their team effort will allow them to continue to dominate the eastern playoffs, having not lost a game in regulation in either of the first two rounds.

Blake Murphy of The Athletic Toronto said there are multiple ways the Miami Heat can become one of the few fifth seeds to get to the NBA Finals.

“For Miami, the biggest key will be figuring out how to slow Boston’s isolation scorers with at least one below-average defender on the floor at a time,” Murphy said. “Can they hide Duncan Robinson on Jaylen Brown? Do they throw zone at Boston? The Raptors offered a template for slowing Boston’s top guys down but Miami has a few more one-way players to protect.”

Joshua Howe of Sportsnet weighs in on whether the Boston Celtics can continue to get historic performances from their players.