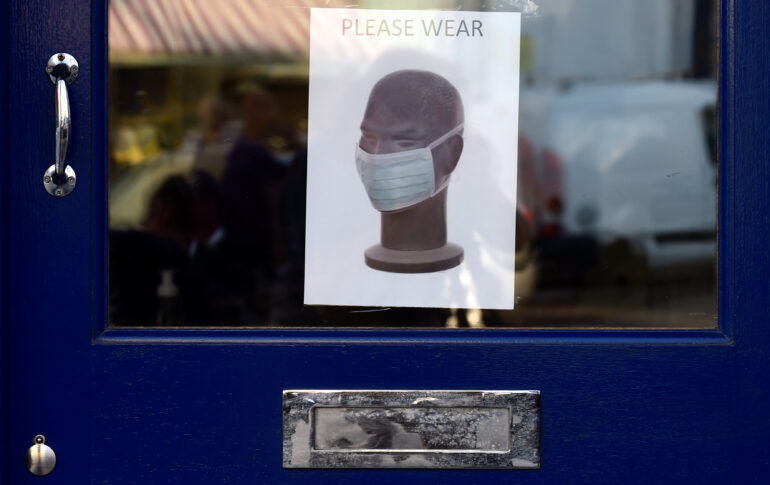 A poster is seen on a door requiring to wear a mask during the outbreak of the coronavirus disease (COVID-19) in Tenby, Wales, Britain September 14, 2020. REUTERS/Rebecca Naden.

Five Western University students have tested positive for COVID-19, the institution in a news release Sunday.

The positive tests come in the wake of massive lines for bars and packed parties in the city of London.

The university said none of the individuals have attended class or been on campus, meaning the cases have been classified as a community outbreak.

Mayor of London Ed Holder said in an online press conference Monday that the city is now on high alert to try and slow down the outbreak, and that more effort is needed.

“It’s an extremely precarious time for our community and we find ourselves at a crossroads,” Holder said. “The virus doesn’t care about all the good work we’ve done together over the last seven-plus months, all of which can be undone in just a matter of days.”

Dr. Chris Mackie, the medical officer of health with the Middlesex-London Health Unit, echoed the mayor’s call for continued vigilance in the same press conference.


“If we ever needed evidence to show there’s still a risk from COVID-19 in the community, this is it,” Mackie said.

The students who tested positive for the virus interacted with multiple people including other students, which MLHU officials say could lead to more cases in upcoming days.

MLHU advised citizens to continue to practice all means of fighting the virus, including hand washing, social distancing and covering your mouth.

Cathy Burghardt Jesson, county warden and mayor of Lucan Biddulph township, said young adults need to realize that there are consequences when strict guidelines are not followed and those consequences could lead to fines.

“We need to be vigilant, now is not the time to be letting our guard down we must be physically distanced we must adhere to those two metres,” she said.

Western University said in a release it still intends to stay open for students, with Jennifer Massey, the associate vice-president of student relations, saying guidelines must be followed in a release by the school.

“We know students want to be together and socialize, and we strongly encourage them to avoid parties and large gatherings,” she said.

Dr. Mackie shared only one known location where the virus has been located, a bar called Lost Love Social House. The bar confirmed the positive testings on social media.

Dr. Mackie said any other locations that test positive for the virus will be released when the evidence is confirmed.