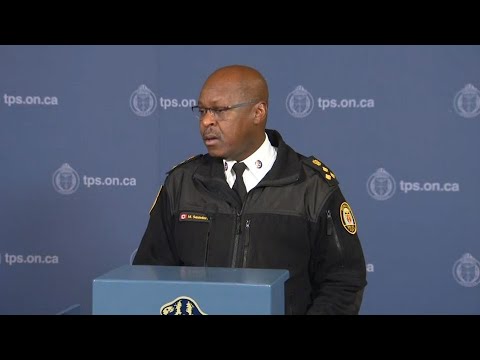 Toronto Police on Friday were continuing their investigation into the kidnaping this week of 14-year-old Shammah Jolayemi.

An Amber Alert was issued after the teen was reported to have not been at school and had not returned home on Wednesday night.

Police said that the boy was grabbed and pushed into a vehicle while shouting for help.

On Friday, Chief of Police, Mark Saunders said in a news conference that around 10 p.m. Wednesday night, police received a phone call that the vehicle matching the description had been found in a park on fire in Caledon.

“As we continue the investigation, we believe that the motive for Shammah’s abduction was because of his brother – his older brother’s – involvement in a drug ripoff with a value of over $4 million,” said Saunders.

Anyone who was or could have been involved with the abduction of Jolay are asked to turn themselves in to police.

“This is a case where I believe with the amount of impact and involvement that the members of the public have had, with the evidence that we are still putting together, reviewing video at various locations there is a fantastic opportunity to find those people that are responsible and bring them before the judicial system,” Saunders said.

Police are still trying to locate Shammah’s older brother as his whereabouts are still unknown.

Steve Ryan, a former homicide detective in Toronto, told Humber News on Friday that the moment police have any evidence that a child under the age of 18 has gone missing, an amber alert is issued.

“Abductions are typically parental, rarely they are done for sexual purposes,” he said.

“Drug dealers and organized crime are ruthless when it comes to a loss of $4 million,” said Ryan.

Toronto Police ask anyone with information to contact them as soon as possible.