Ontario Liberals turning the page to a new era 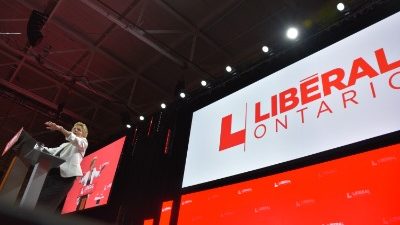 The Ontario Liberals are looking to build a multi-generational coalition on the centre-left as party members gather this weekend to pass the torch to a new leader and prepare to take on the ruling Progressive Conservatives in two years.

Kathleen Wynne, the former premier, was honoured last night in a tribute to her more than 20 years of political life, five of which were in the premier’s office.

Wynne, still a sitting MPP at Queen’s Park, said she continues to serve because she believes in a progressive future for Ontario.

While it was Wynne who was honoured by the party last night, she paid a personal tribute to her partner of 15 years, Jane Rounthwaite.

“There is no Kathleen Wynne the politician without Jane,” she said.

The Liberals, who were left barely standing with a handful of MPPs after the 2018 provincial election, seek to build momentum to take back Queen’s Park in 2022. Recent polls have shown the Liberals have an edge over the PCs and New Democrats.

Deputy Prime Minister Chrystia Freeland was co-chairing the event with interim leader John Fraser, lending her support on behalf of the federal party.

The Toronto-based MP said that the status of the provincial Liberals reminded her of when she joined the federal party in 2013 when it was ranked third and decimated after the 2011 election.

Freeland encouraged convention-goers to keep their spirits up because, just like the federal party did in 2015, the Ontario Liberals will have a comeback and win the support of the electorate.

She pointed to recent Liberal byelection wins in Ottawa ridings as a sign of improvement.

“Those were some wins. The work of winning the whole province starts right here, right now, this weekend,” the deputy prime minister said to hundreds of cheering delegates, candidates and party members.

The attendees for the first day of the convention were a mixed group of different ages and ethnicities. When the candidates were announced and as they entered the conference hall, cheers and high spirits accompanied each walk.

Gian Franco Tornbino, 15, a delegate for Steven Del Duca, said that young people are key to the party’s future success.

“I would say the Liberal plan is more reachable and viable,” he said. “And we can provide a better outcome for them and their universities than the NDP camp.”

Who will emerge the leader?

The latest major poll put the Ontario Liberals ahead of the ruling Progressive Conservatives.

A Pollera Strategic Insights survey published by the Toronto Star in January placed the leaderless Liberals at 33 per cent, the PC Party at 29 per cent and the New Democratic Party at 27 per cent.

Now, the Liberals are poised to get a new leader in less than 24 hours.

Steven Del Duca is the clear front-runner heading into Saturday’s leadership contest, according to polls and pundits. Del Duca has secured 1,171 of 2,084 elected delegates, setting him up to likely win on the first ballot.

Del Duca is a longtime party member and former transportation minister in Wynne’s government before losing his seat along with some 50 others when the Liberal Party was defeated in the 2018 provincial election.

Saturday will kick off with candidate speeches in the morning with the new leader expected to be announced shortly before 2 p.m. from the International Centre in Mississauga.