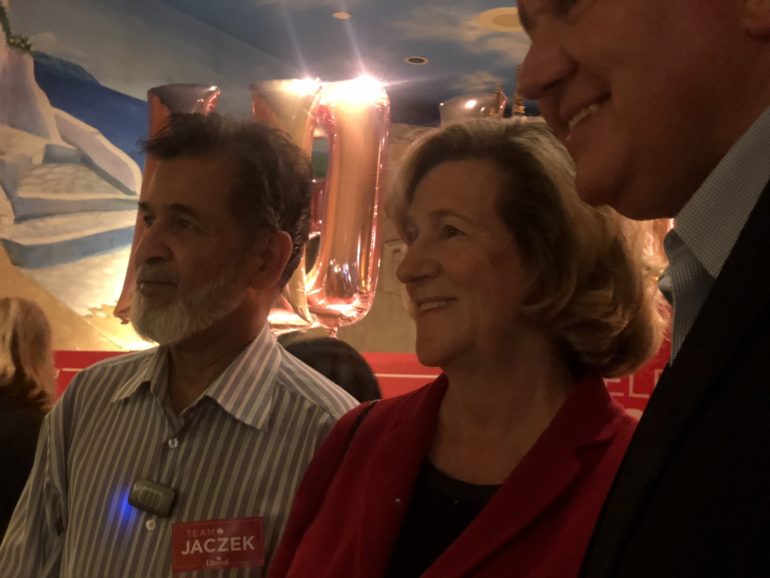 Despite challenges from an Independent incumbent and, more significantly, the Conservative candidate, longtime Liberal Helena Jaczek took Markham-Stouffville with over 20,000 ballots in favour, sending her to Ottawa after over a decade in provincial politics.

The Conservatives were a distant second at just over 15,000 votes.

Jaczek told Humber News that she ran because she heard residents wanted a Liberal candidate to vote for as the incumbent Jane Philpott was kicked from the Liberal Party in April in a move related to the SNC Lavalin affair.

“I also was beginning to hear a lot of people very upset with Doug Ford and all the cuts that he’s been making,” she added, saying that she “didn’t want to see a Conservative government in Ottawa as well.” Jaczek was previously a provincial parliamentarian.

Acknowledging that the Liberals would form a minority, Jaczek said that the “very healthy Liberal caucus” would work hard on “implementing the Liberal agenda.”

The riding was set up to be a competitive race. It has for some time been a swing riding between Liberals and Conservatives. Jaczek won 16,269 votes or 38 per cent of the vote in 160 polls out of 238 polls reported.

But the small, eastern Toronto riding with a population of 90,000 has received more attention than usual this year due to a political affair over a construction firm that rocked Canadian politics earlier this year.

Coming in third, Jane Philpott failed to score a seat this year with 9,361 votes or 21.9 per cent of the vote.

Emotions are high, as joyous supporters celebrate the final result.

The list of candidates for the riding with a population of 90,000 was as follows:

When news broke in February via the Globe and Mail that Prime Minister Justin Trudeau was alleged to inappropriately influence then-justice minister and attorney general Jody Wilson-Raybould to give SNC-Lavalin a deferred prosecution agreement, it kicked off a drawn out scandal.

A deferred prosecution, or DPA, lends judiciary leniency to a company with the idea that any harsh consequences would harm the employees more than the executives that could be found guilty of a crime. Such an agreement for SNC-Lavalin was said to play out well in seat-rich Quebec.

As part of the fallout over the scandal, Trudeau lost two high-profile cabinet ministers, one being Wilson-Raybould and the other Jane Philpott, who departed the Liberal cabinet on Mar. 4 over how SNC-Lavalin affair was handled. Philpott was previously the Indigenious Affairs minister.

As the scandal unfolded Philpott, then holding the high-profile presidency of the Treasury Board, was seen as a firm ally to Wilson-Raybould as she stepped down in solidarity with her political ally.

As for Jaczek avoided speaking directly what will be viewed as a significant win for the Liberals against Philpott, ignoring the impact of SNC-Lavalin and instead focusing on her drive to win.

Philpott won with nearly 50 per cent of the overall vote in the 2015 federal ballot for Markham-Stouffeville, a slim 3,000 ballots ahead of her Conservative rival.

“This was my sixth campaign. You just run to win and many of your opponents are very well intentioned, honourable people and..I’ve respected them all,” she said in an interview with Humber News.

Jaczek is not new to politics. She served as a member of provincial parliament from 2007 to 2018 in the riding of Oak Ridges-Markham and held cabinet positions from 2014 onwards for former Ontario premier Kathleen Wynne.

For this election, she was stumping for Team Trudeau, setting up a battle in Markham-Stouffville between a popular but shunned ex-Liberal versus a loyal partisan.

In the wings and the candidate likely hoping for a vote split between the two women was Theodore Antony, the Conservative hoping to break through and turn the riding for his party for the first time since the blue wave in 2011.

Jaczek told the CBC on Oct. 18 her main competitor was Antony. Provincial results from the last election in Ontario may support that argument as, in 2018, the Ontario Progressive Conservatives scored a 22-point margin victory in the riding.

Following Wilson-Raybould’s testimony to the Justice Committee on the SNC-Lavalin scandal in March, Philpott resigned from the Liberal cabinet over Trudeau’s handling of the affair.

Philpott and Raybould were expelled from the Liberal caucus on April 2 over a phone recording between Michael Wernick, then-Clerk of the Privy Council and Wilson-Raybould. Wilson-Raybould submitted the recording as evidence to the Justice Committee.

Philpott served as an Independent MP since, and was running to return to Parliament.

Both Philpott and Wilson-Raybould ran local campaigns, with both saying on Sept. 25 they met and exceeded their funding goals.

“We have been tracking that I have a three to one advantage amongst decided voters. That’s not what most polls are saying, but that’s what we’re hearing after talking to thousands of people,” Philpott said in an interview with the National Post on Oct. 10.