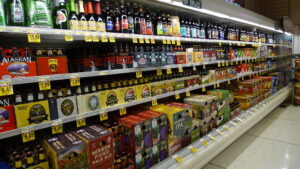 The Ontario government recently made an announcement that alcohol will be sold in more grocery stores but Toronto’s top doctor stated in a recent report that she’s worried increased access to alcohol could lead to health problems. (Flickr/Ewan Munro)

A Toronto’s top doctor says she fears increased alcohol-related consumption and illnesses as access to alcohol is made easier by recent changes to provincial regulation.

Dr. Eileen de Villa, Chief Medical Officer of Toronto, prepared the report released on July 8 which shows about four in five Ontarian adults have consumed alcohol in the past year and the drinking trend in Torontonians is similar.

“While alcohol is part of many celebrations in life, it also causes health risks, including some cancers,” she said in the report. “This is why responsible use is so important and why we are calling for a comprehensive provincial alcohol strategy focusing on prevention, harm reduction, treatment and enforcement.”

Ontario announced last month changes to how alcohol is sold and consumed in the province.

The changes include 87 additional grocery stores to start selling wine, beer and cider, which raises the number of grocery stores selling alcohol in Ontario to 450.

De Villa said changes to regulations, such as allowing alcohol to be served starting at 9 a.m., will negatively impact the public’s health and safety.

Evidence also shows alcohol consumption in women is rising and women are now catching up and consuming similar alcohol quantities to men, she said.

Victor Fedeli, former Finance Minister of Ontario, tweeted in support of selling beer in grocery stores when the announcement was first made.

"Imagine if there was something called The Bread Store…" https://t.co/7r0WAjwuhU

Nicholas Peach, founder of BareBones Bartending School in Toronto, said the time change is not an issue and believes people will not be lining up outside an LBCO at 9 a.m.

“The point of the change actually evens out the playing field for restaurant owners to compete with the LCBO,” he said. “People can have the opportunity to drink at 9 a.m. with their breakfast or brunch and have fun with their friends.”

“We have alternative hours for events held overseas. It benefits both restaurant owners and grocery businesses. The government is at the stance of personal responsibility especially during these events,” he said.

However, Peach said people need to know their limits.

“I think that people need to talk and communicate about the negative effects of alcohol to make people more aware,” he said.

Alcohol use can effect the brain, liver, pancreas, heart, lead to cancer and also weaken the immune system.

The legal blood alcohol concentration to operate a vehicle in Ontario is eight milligrams of alcohol in 100 millilitres of blood, with severe penalties if caught over the legal limit. Driver’s face penalties with blood alcohol readings of between 0.05 and 0.08. Learning drivers must have a zero reading.

Peach said he supports the industry and wants people to be aware of how much alcohol they can drink.

“Alcohol is a big part of my business,” he said. “People who drink socially and appropriately have a good time when drinking. It is good to raise awareness on this topic during the summer.”