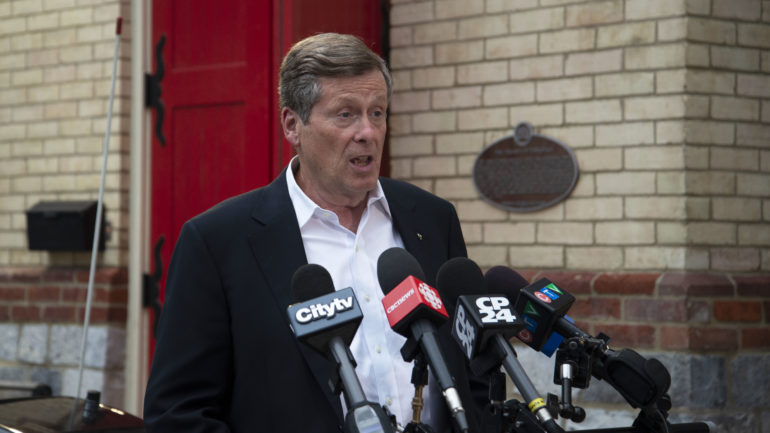 Mayor John Tory said that apart from two tickets, he would increase the fine or add another ticket for those breaking the noise bylaws. (Asmita Munde)

Excessively noisy vehicles will now be subject to fines and tickets in Toronto.

“It is least explainable, least acceptable and most inconsiderate kind of noise that can be made in the big city,” Mayor John Tory said at the announcement of the noise reduction enforcement campaign on Monday night.

Toronto Police in a partnership with the City of Toronto’s Municipal Licensing and Standards will now crack down on loud vehicles in an education and enforcement campaign enforcing existing provincial and city laws aimed to curb noise pollution before a new noise by-law comes into effect on Oct. 1, 2019, Tory said.

The blitzes will be conducted by Toronto Police and by the City’s Licensing officials, who will use noise reading meters.

A $110 fine will be issued under the existing Highway Traffic Act and $155 fine under the city’s by-laws with exemptions in place.

The enforcement campaign began in Yorkville, a hot spot where many complaints originate, and in Scarborough. 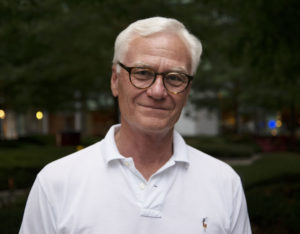 The city received more than 11,000 noise complaints of all kinds from residents over the year regarding the excessive noise, Tory said.

With widespread construction around the city, altered vehicles that create noise have added even more disruption to the lives of the residents, he said.

“It’s turned into a late-night race track,” he said.

Mather said the noise disruptions are worst over the weekends. They start early in the morning and escalate through the night.

“It’s been a persisting and escalating problem for a very long time and it seems to have peaked over the last year or so. The level of disruptions tends to have been increasing. It’s not just noisy motorcycles, it’s also noisy cars,” he said.

Tory’s eyes squinted as he turned towards two noisy motorcycles passing by while announcing the noise blitz.

In a press release, Toronto Police noted that examples of excessive noise include “a loud auto stereo or car, truck or motorcycle exhaust emitting sound to the extent it disturbs patrons at a restaurant, nearby residents or other motorists.”

The new bylaw will add a provision prohibiting sound resulting from “unnecessary motor vehicle noise, such as the sounding of a horn, revving of an engine and squealing of tires.”

Toronto Police conducted a blitz two weeks ago to get a sense of the extent of the problem and handed out 44 tickets. 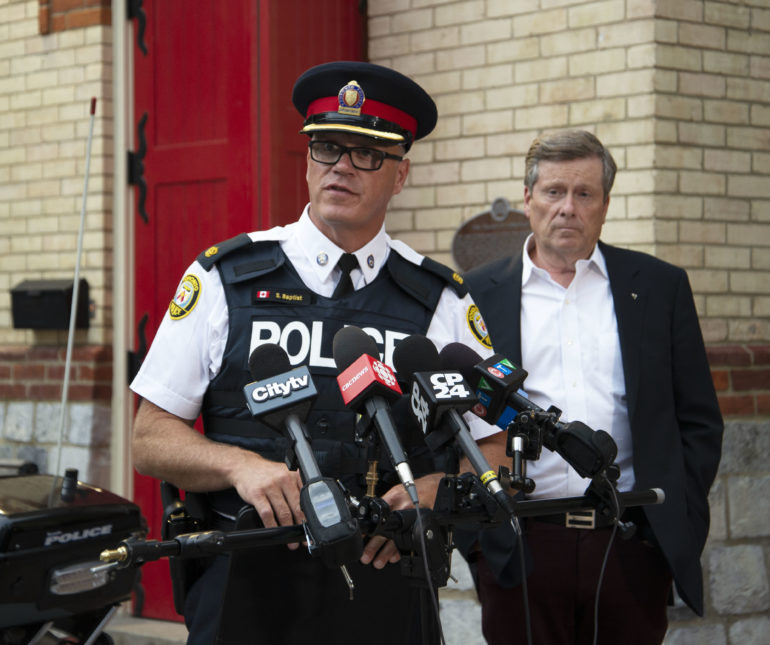 Traffic Unit Superintendent Scott Baptist said during the next few weeks and over the course of the summer these blitzes will be carried out as it is essentially a summer concern.

There is a significant impact on health due to exposure to loud noises, according to Health Canada.

“Repeated exposure to excessive noise for long periods of time can cause permanent damage,” Health Canada suggests. “So can a single exposure to an intense sound close to the ear.”

Tory said he counts on residents’ cooperation and understands people should be entitled to go about their business without such unnecessary interruption of this kind.

“We want to keep the city humane and livable for people who want to live in all parts of the city,” he said.