DVP closure could impact drivers for months to come 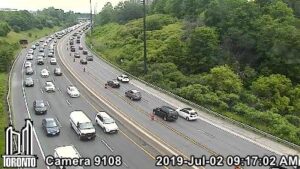 Construction on one of the GTA’s busiest highways may have Toronto drivers wishing for the traffic jams that plagued the Don Valley Parkway of the past.

Bridge maintenance work over the DVP began this morning and is expected to continue through the end of September, according to the City of Toronto’s website.

The closures include the DVP’s northbound and southbound left lane and shoulder/HOV lane from Don Mills Road to Lawrence Avenue East, leaving only two lanes open in each direction.

Susan Pape, a City of Toronto spokesperson, said in an emailed statement that “staff will be monitoring and adjusting traffic signals around all construction closures to help keep the traveling public moving.

“As well, the city has been actively communicating this work to raise awareness with the public and has put in place signage to advise road users of the work,” Pape said in the email.

Sgt. Brett Moore, of the Toronto Police central traffic unit, said the city has done a good job in advertising and preparing drivers for the DVP closures, but delays and congestion are expected.

Apps like waze, that utilize road construction information to help users navigate, may also help alleviate some of the congestion.

However, according to a tweet this morning from former city planner Jennifer Keesmaat, this redirection of traffic can be a safety problem for residential streets.

A few yrs ago a report detailed how transit-oriented communities are 5X safer (significantly less traffic fatalities) than auto-oriented communities. Today these 'hoods have become cut-throughs for drivers, a la Waze. Benefit has vanished due to an app + voila, less safe streets.

If the information in Keesmaat’s tweet is true, traffic re-direction could cause safety and congestion problems on more residential roads, Moore said.

In the specific case of the DVP, Moore said most traffic will likely divert to other major routes, rather than residential streets.

But he encouraged any concerned residents or community members to get in touch with their local councillors and police officers as soon as the issue arises.

Efficiencies and apps like waze are “not going anywhere” and the best way to combat community safety concerns around traffic overflow is through communication, he said.

He added the sooner concerns are communicated, the better, and taking public transit if possible is the ideal solution.

Stuart Green, spokesperson for the TTC, said they did not see any major delays or disruptions this morning from the closures, but if necessary they do have the flexibility to adapt and add extra vehicles.

He said July and August are seasonally slower months for the TTC and may not provide the best marker for the true impact of the closures.

What will really be interesting to see is what happens if the construction continues into the fall when ridership picks up again, Green said.