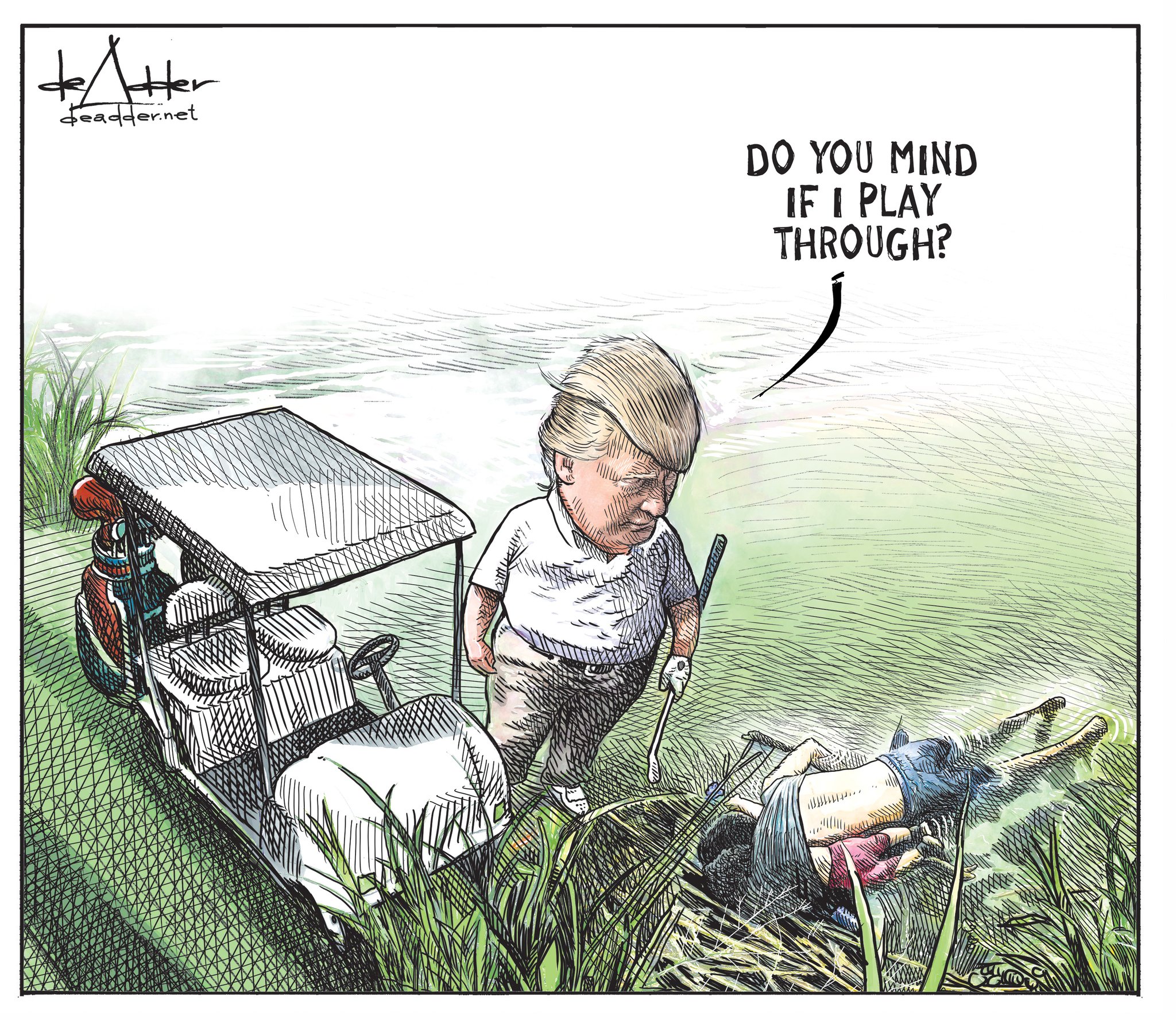 Michael De Adder, who is currently based in Halifax, posted the cartoon that depicts Salvadoran father Oscar Alberto Martinez Ramirez and 23-month-old daughter Angie Valeria — who died while attempting to cross the Rio Grande into Texas — with a golf-playing Trump standing over the pair.

De Adder announced he was let go on June 28 via Twitter only two days after the cartoon was released.

BNI owns most of the print newspapers in the province of New Brunswick and de Adder worked for 17 years as as an editorial cartoonist for the company.

“It got to the point where I didn’t submit any Donald Trump cartoons for fear that I might be fired,” de Adder continued in another tweet.

BNI posted a statement on Twitter denying de Adder was fired due to his Trump cartoon.

“This is a false narrative which has emerged carelessly and recklessly on social media. In fact, BNI was not even offered this cartoon by Mr. de Adder,” the statement continued.

BNI said the negotiations to bring in another cartoonist to replace de Adder had been in the works before the Trump cartoon was released.

Bruce MacKinnon, staff editorial cartoonist for the Halifax Chronicle-Herald, said he doesn’t know if what BNI said is true but believes there is strong indication of more than a little political bias if a cartoonist had every Trump cartoon they drew rejected for the last year.

“As a cartoonist, you draw at the pleasure of the paper you work for but technically, our job description is to make commentary on the political issues of the day…,” MacKinnon told Humber News.

“If the employers are going to allow you to make commentary on the important political issues of the day or that radically restrict the news stories you are allowed to address, you’re pretty much handcuffed,“ he said.

MacKinnon said he doesn’t understand how Trump cartoons wouldn’t be suitable for a New Brunswick audience.

“It does make you wonder…the reasons for that would seem to be a lot more scary and more insidious…[are] the owners of those newspapers interfering [with] their business interests in the United States,” he said.

De Adder is still employed as a freelancer at Halifax Chronicle-Herald where MacKinnon works, and the Toronto Star said it will also be continuing to keep him on as a freelancer.

This is the newspaper @chronicleherald I still do work for in Atlantic Canada as part of the @SaltWireNetwork . They deserve support for running every cartoon I ever gave them and giving me a freelance job in 2010. https://t.co/xxh2bzho5q

De Adder also noted every cartoon he created which contained criticisms of the New Brunswick Premier Blaine Higgs, who is a former Irving Oil executive, were rejected by the paper.

The Premier of New Brunswick Blaine Higgs is a former Irving Oil executive and any cartoon I drew that was slightly critical of him was systematically axed. You want to know why I was let go? I wanted to do my job as an editorial cartoonist, and they wanted me to do their job.

BNI is owned by the Irving family, which also owns Irving Oil.

This isn’t the first time a cartoonist has been fired from a newspaper after drawing cartoons criticizing Trump.

Rob Rogers, a veteran cartoonist, was fired from the Pittsburgh Post-Gazette without an official reason for why many of his cartoons were rejected during his time there.

Rogers estimated that 90 per cent of the cartoons were rejected by the paper were the ones he drew that featured Trump in a critical manner.

“You can’t be an editorial cartoonist in the US and not draw cartoons of the president, you pretty much have to…in the US it’s so much more polarized,” MacKinnion said.

He said he doesn’t believe papers are as extreme and quite that polarized in Canada.

“I really hope [this event] doesn’t [set a precedent for the future of cartoonists in Canada],” MacKinnion said. “If there’s been that kind of inference in terms of editorial opinion and what the cartoonist is allowed to do…that is scary for the future of free press and editorial freedoms.”