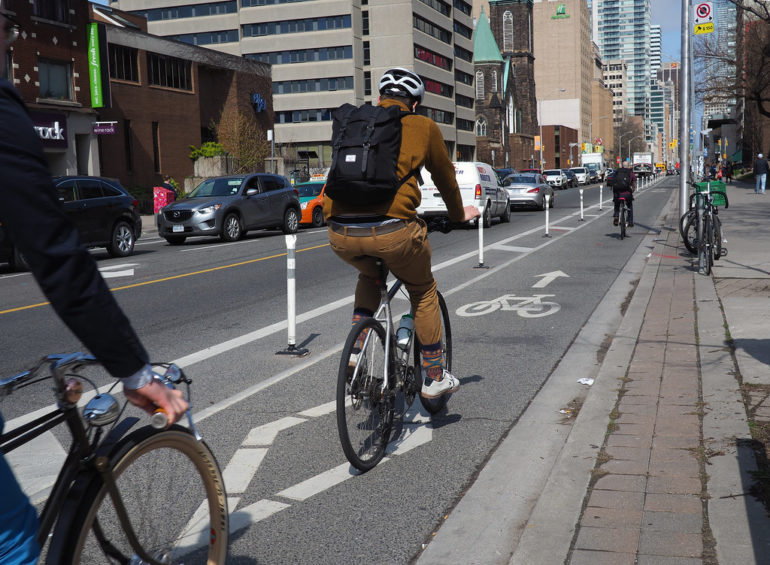 Jared Kolb says he’s encouraged by the level of enforcement by Toronto Police in the effort to keep bicyclists safe on city streets.

The executive director of Cycle Toronto said “it was great to see” last month’s Safety for Cyclists Campaign, which saw police issue more than 800 tickets for aggressive behaviour by motorists.

The campaign, which ran between June 17 to 23 in support of June being Bike Month 2019, brought alongside parking enforcement officers, police, CAA, Toronto Public Health, and Vision Zero, which is Toronto’s road safety plan, to enforce safety.

But Central Traffic Unit Sgt. Brett Moore said the campaign is about more than the number of tickets: it includes the conversations and behavioural changes necessary to promote cyclist safety.

He said the number one question police get asked every year is how many tickets were issued after a campaign — but it’s no indication of success.

“We really focused our efforts and energy during a campaign, definitely to conduct zero tolerance enforcement for issues that we know hurt people,” Moore said. “That’s the goal, so we’re focusing on driver behaviours primarily, the behaviours of speeding, driving distracted, aggressively, and impaired.”

He said the total number of tickets issued during the campaign was 1,617 and more than 800 of those were for aggressive driving.

Moore said the total number of tickets issued can be a lot and they know for every ticket issued there are others out there still committing offences, which shows there is still a long way to go in changing aggressive driving behaviour.

“What we’re really wanting to measure is if people are actually changing behaviour or thinking differently about road safety and their position on the roads,” Moore said. “That’s a real measurement of a successful campaign if we can get people to think differently.”

Kolb said it’s encouraging to see this campaign and its focus around the kinds of driver behaviours that most often leads to collisions.

He said there are a couple of ways to prevent any possible collisions between motor vehicles and cyclists.

“The number one way to reduce the overall number of interactions that are really leading to preventable injuries is to invest in a grid of physically separated bicycle lanes,” Kolb said.

He said after bike lanes were installed in some areas of Toronto, they have seen a 60 to 70 per cent decrease in conflicts between motor vehicles and cyclists. Kolb said one of the most serious issues that Cycle Toronto focuses on is dooring, where a motorist opens a vehicle door into the path of a cyclist.

He said because police can’t be everywhere, he would like to see more automated speed enforcements, such as photo radar in school and community safety zones.

“This isn’t something that just happens in one week of the year it’s happening throughout the year, this is a busy time of course because there’s more people back out riding bicycles in the nice weather, so to see this is encouraging,” Kolb said.

In addition to being an active and healthy way to get around the city, Moore said cycling is becoming much more than just recreation and is a main mode for many.