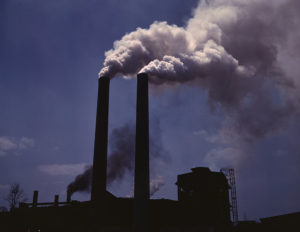 Smoke stacks from a production plant. The pollution coming from this factory is part of the Air Pollution theme of World Environment Day 2019. (Wikimedia Commons/Alfred T. Palmer)

World Environment Day is being celebrated today and the theme for 2019 is an issue that affects almost every part of the world: Air Pollution.

This year, China hosted the 46th annual event and countries all over the world held events to mark the occasion.

The United Nations (UN) designated June 5 as World Environment Day and held the first celebration for it in 1974 as as a way to raise awareness and encourage people worldwide to protect the environment.

Keishamaza Rukikaire, Head of UN Environment News and Media Unit, said that World Environment Day is an opportunity each year to raise awareness of a global problem.

“Air is something that connects all living beings on earth,” she said. “It has no borders, and neither does air pollution.”

Rukikaire said that air pollution is a problem worldwide that every country can work together to tackle.

“It’s also important to discuss the solutions – we have seen a number of countries start to adopt cleaner energy policies, introduce carbon taxes and low emission zones in big cities, and car-free days,” she said.

Rukikaire said the theme this year is important because it brings attention to the problem of air pollution but also offers the opportunity to create sustainable and effective solutions.

Solutions she noted include: car pooling or taking public transportation, switching to a hybrid or electric personal vehicle, turning off the car engine when it’s idle, or adopting a plant based diet and limiting or eliminating meat and dairy consumption.

The WHO state on their website that 91 per cent of the world population live in environments that exceed the WHO guidelines on air quality.

1. Polluted air is creating a health emergency
2. Children are most at risk
3. Pollution & poverty go hand in hand
4. The cheaper the fuels, the higher the costs
5. The right to clean air is a human righthttps://t.co/al0APkYnCm

The first World Environment Day theme came in 1977 when the UN showed concern for the ozone layer, an issue that has been getting increasingly worse throughout the decades.

This past March, the Ontario government stated that they are considering placing a ban on single use plastics. They haven’t reached a conclusion yet but it certainly opened up the conversation around plastic products, especially drinking straws.

Closer to home, Humber College has an initiative to educate students about caring for the environment through the Fundamentals of Sustainability program that is offered exclusively online.

Monica McGillivray, program coordinator, said the certificate has been offered for five years and the online aspect ensures that students don’t have to use gas to get to school.

Anyone in the world can take the course as long as they have internet access and the courses, which are offered in conjunction with Ontario Learn, typically take 30 to 40 hours to complete. Students choose four of six courses offered.

“Sustainability is on everybody’s mindset now, so that awareness has increased,” McGillivray said. “It’s really on the radar, as it should be.”

McGillivray also pointed to the Sustainable Energy and Building Technology program offered through the School of Applied Technology.

The program teaches students how to adapt to climate change and create a sustainable lifestyle by using appropriate resources.

McGillivray highlighted a Humber initiative called the “#BeatAirPollution Challenge” which is a contest running until June 9.

“Participants throughout the college do challenges to post pictures of how they’re doing things to beat air pollution,” McGillivray said. “Whether they drive or carpool, limit their consumption of meat and dairy, compost, or recycle non organic trash.”

Students are encouraged to post pictures of themselves doing activities on the checklist onto their social media accounts and tag @SustainHumber.

Similarly, the UN created the World Environment Day Mask Challenge as a way to encourage people all over the world to make a pledge to reduce air pollution.

They also posted a Reduce Air Pollution Quiz which is an interactive way for people to learn about air pollution and reduce their own impact on the environment.

The UN stated that they’re inviting people to post photos of themselves fulfilling their promise to social media under the hashtags #WorldEnvironmentDay and #BeatAirPollution.

“Unless we act now, we will continue to see health problems and death as a result of air pollution,” Rukikaire said.