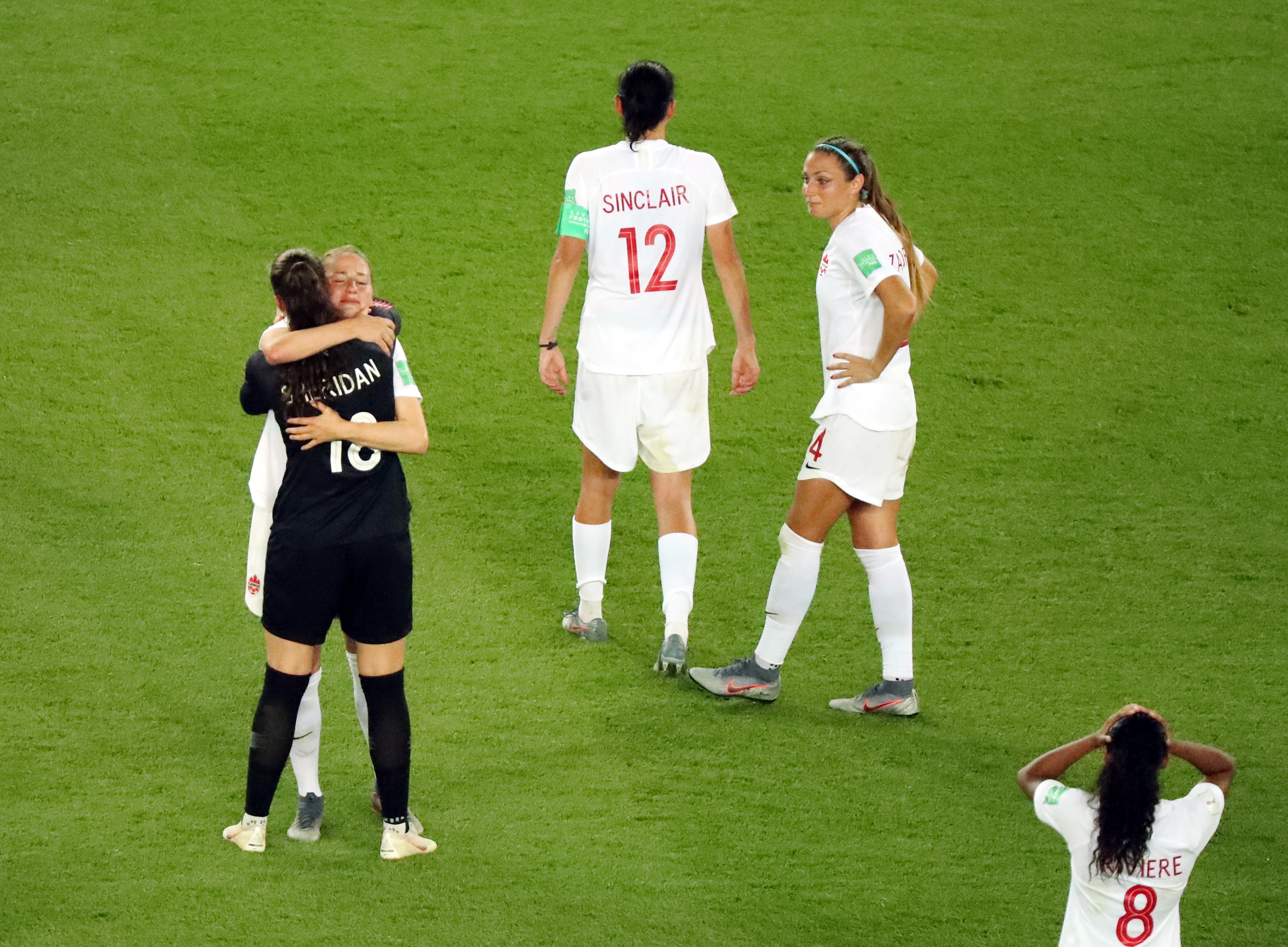 Canada’s Jayde Riviere, Christine Sinclair and teammates look dejected at the end of the match of the Round of 16 against Sweden in Women’s World Cup in the Parc des Princes, Paris, on June 24. (REUTERS/Lucy Nicholson)

The fifth-ranked Canadian women’s soccer team couldn’t make it through the round of 16 of the Women’s World Cup in France after being defeated by Sweden 1-0 yesterday.

“It’s a disappointment,” said Jim Bialak, the recently retired manager of Humber Athletics and Sports Information Director, who watched the game. “If you look at it any other way it’s just putting sugar on it.”

This was their second straight defeat in the tournament. The Canadians had qualified for the Round of 16 but finishing second in Group E despite losing to the Dutch 2-1.

Bialak said although they lost against the Netherlands, management did well by taking Christine Sinclair out of the game early and preserving the team captain for the next round match.

Canada was in tough against a veteran Swedish side led by captain Caroline Seger under the scrutiny just over 38,000 attendees at the Parc des Princes. The Canadians had almost 60 per cent of the possession of the ball but only managed to get two shots on target, the same as the Swedes.

Sweden scored at the 55th minute after forward Stina Blackstenius received a beautiful driven pass that left her alone with Canadian goalkeeper Stephanie Labbe and a lone defender, Shelina Zadorsky. Blackstenius’ finish took a slight deflection off Zadorsky before going into the net.

Ten minutes after Sweden’s goal, Canada got a penalty after a handball occurred in the Swedish area. The play had to be checked on the Video Assistant Referee before the match’s referee gave the penalty kick to Canada.

Sinclair, the usual penalty kicker in the team, conceded the opportunity to her teammate, midfielder Janine Beckie, who couldn’t score the penalty after a fine save from Hedvig Lindahl. 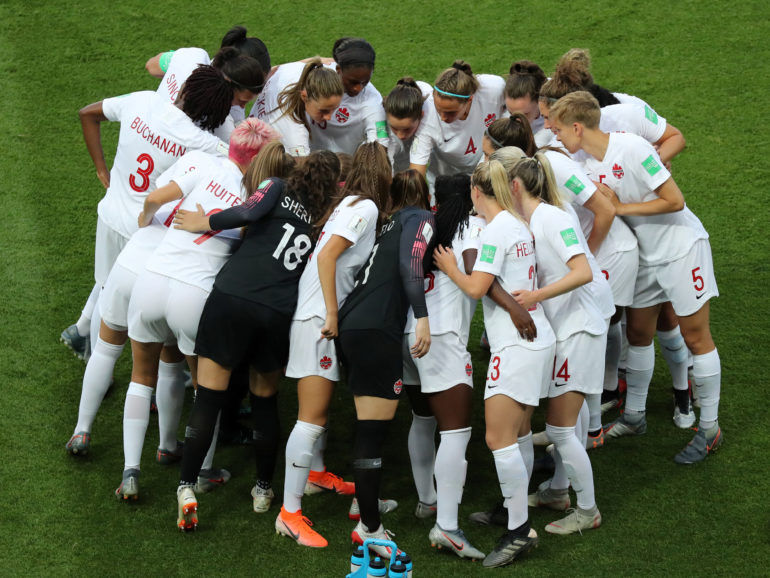 Canada players huddle before the match of the round of 16 against Sweden in the soccer Women’s World Cup in the Parc des Princes in Paris, France on June 24. (REUTERS/Lucy Nicholson)

Bialak said Sinclair should have taken the penalty kick.

“The thing that bothers me the most, it’s the coach going to the players to ask who wanted to take the penalty kick,” he said. “I was talking to a friend that told me that this was a poor coaching decision, I disagree. I think this was a no-coaching decision.”

Kenneth Heiner-Møller, Canada women’s soccer team head coach, said in a press conference after the match they didn’t have anything decided about who was taking penalty kicks in the team.

“We got players that can take a penalty kick, it’s not like we have that on a piece of paper. It’s just a question of who is going to step up, and Janine stepped up. I’m proud of her,” he said. “It was actually a pretty decent kick but an excellent save from Hedwig.”

Heiner-Møller said he was proud of the performance of the team but disheartened by the result.

“The flow of the game was going on in our favour and we were getting closer and closer to the goal but the passes were just not getting through,” he said. “We saw a good Canadian side during this World Cup, just not during this last 90 minutes, not today.”

Sweden now face the favourite German squad in the quarter-finals round Saturday.

Canada started the tournament with a victory against Cameroon 1-0. The single goal was scored from a corner kick and a header from Kadeisha Buchanan just before the end of the first 45 minutes.

The Canadians continued their winning streak with a 2-0 win against New Zealand and secured their ticket to the next round. The goals were scored by Jessi Fleming and Nichelle Prince, both during the second half.

The Netherlands proved to be a very difficult challenge for Team Canada. Both teams were fighting to qualify in the first place of the Group E which would give the winner the possibility of facing an easier match during the Round of 16.

The Dutch scored first, just after the start of the second half. Sinclair responded quickly with the equalizer, the 182nd goal in her career, which puts the 36-year old striker two goals away from reaching the American player Abby Wamback’s world record. But the Netherlands needed only 15 minutes to hit the back of the net again and get the three points to secure first place in the group. 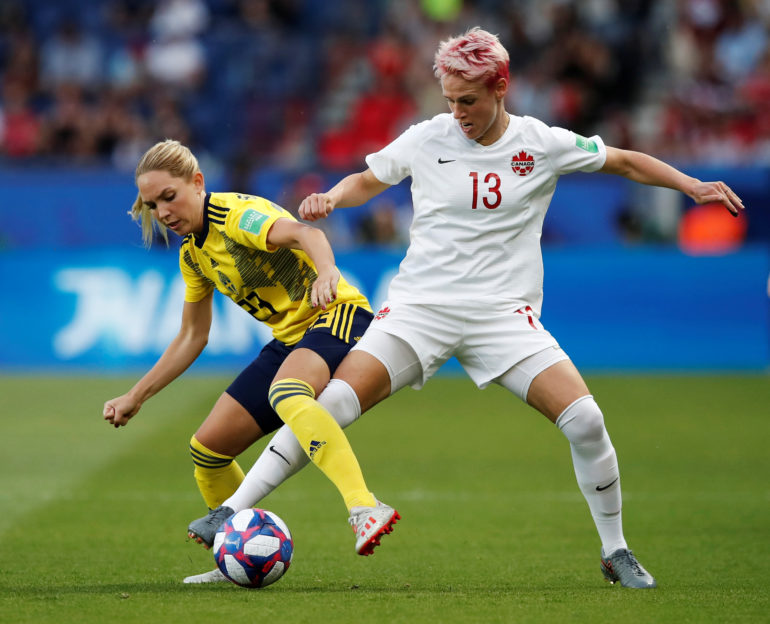 Sweden’s Elin Rubensson in action with Canada’s Sophie Schmidt during their round of 16 match against Canada in the Women’s soccer World Cup in Paris, France in the Parc des Princes on June 24. (REUTERS/Benoit Tessier)

Canada’s last world cup performance at home got them to the quarter-finals on Canada 2015, their best record in a world cup since earning fourth place in the United States 2003.

“This is an exciting group, we’ve got a lot of very young players who have such a bright future, they might have not gotten a chance to get on the field, but just by being in an event like this has given them thicker skin,” he said. “We have the third youngest squad on this world cup, the future is looking very, very bright.”

Bialak agrees Canada’s women’s soccer is going to keep getting better, that there is room for improvement.

“The future looks great. they are going to lose the greatest player of women’s Canadian soccer history, but they are doing a lot of things right,” he said. “There are some things on their game they just have to improve.”