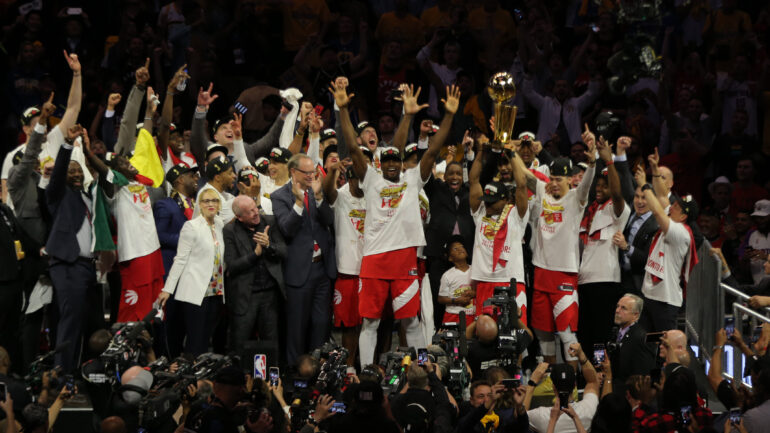 Jahcobi Neath’s eyeballs were glued to the TV screen, parsing the Raptors’ each and every move while he scampered from side to side in anxiety during breaks.

An hour later, after a string of fretful moments, Neath found himself in a frenzy.

The national Under 19 Team Canada basketball player shed his T-shirt and swirled it ecstatically.

“It was the greatest moment in Toronto’s basketball history,” Neath said.

Toronto Raptors left the world dumbfounded Thursday by rising from the ranks as underdogs and snatching the NBA crown for the first time in franchise history.

Matthew Moonessar had his fingers laced together throughout the game as he struggled to contain himself. But following the victory, he simply couldn’t.

“As soon as the buzzer went off, I and my friends got up and started dancing,” Moonesar said.

He was not alone. Fans all over Toronto expressed their exhilaration by climbing over traffic signals, wearing masks and turning tranquil streets into a carnival with high-fives continuing until dawn. 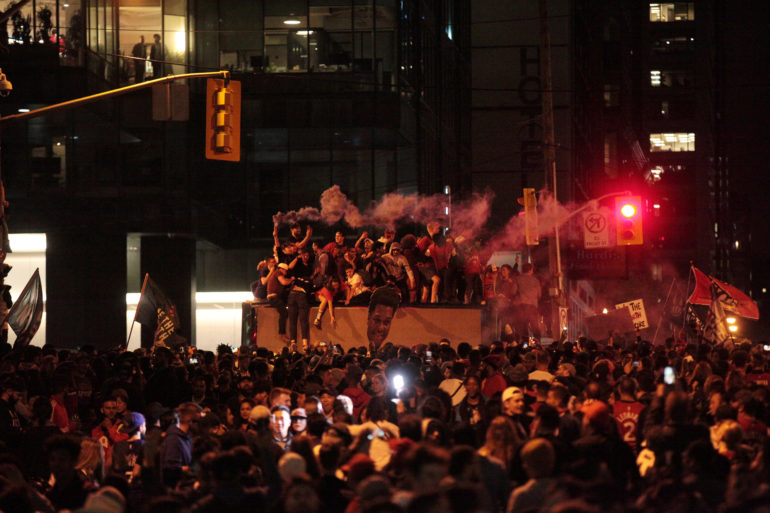 Fans celebrate after the Toronto Raptors defeated the Golden State Warriors in Oakland, California in Game Six of the best-of-seven NBA Finals, in Toronto on June 14, 2019. (REUTERS/Andrew Ryan)

The playoffs were a perfect cap to a hard-fought season filled with uncertainty, triumph and tribulation.

At the beginning of the season, Raptor’s president of basketball operations, Masai Ujiri, rolled the dice and traded DeMar DeRozan for Kawhi Leonard, who was injured at the time. Many speculated that he wasn’t even going to stay next season.

“When I was there on my opening day meeting I was focused on the now and I wanted to make history,” Leonard said at a news conference. “And I did.”

At his debut, he proved that he was still able to play at an elite level, scoring 20+ points in his first five starts.

“I’m trying to play the right game, don’t care about making headlines or how much people want me to score,” he said.

To aid the Raptors’ quest, there was the emergence of Pascal Siakim, a man who had never played organized basketball until he was 16.

The 24-year-old Cameroonian contributed significantly by averaging nearly 17 points a game. Last year, he averaged about seven points a game.

“…Couple years of high-school, couple yours of college and to be able to say I am a world champion, it feels great,” said Lowry, who has been on the team since 2012.

This team was quintessential of an underdog. No player on this team was selected with a pick higher than 15 in the NBA draft, and some were even undrafted.

However, last night, when the buzzer rang, this team of underdogs became champions of basketball.

Photographers and players swarmed the court as tears were shed and hugs were shared all around.

Leonard, who was heavily scrutinized last year, was named Finals MVP, after averaging 28.5 points per game.

“We’ve been growing and trying to prove the world the meaning of having an NBA team outside of the United States,” Ujiri said.

The celebrations are far from over. Fans will get a chance to celebrate with the team at the Championship parade on Monday, June 17 at Nathan’s Phillips square.