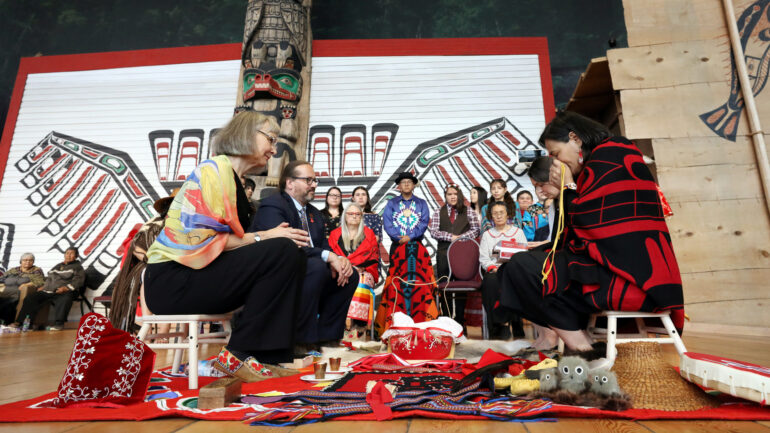 Commissioners prepare to hand over the final report during the closing ceremony of the National Inquiry into Missing and Murdered Indigenous Women and Girls in Gatineau, Quebec, Canada, June 3, 2019. (REUTERS/Chris Wattie)

Indigenous Heritage Month began on a bitter note following the release of a controversial report that laid bare how Canada steadily inflicted a ‘genocide’ on Indigenous communities over an extended period of time.

The National Enquiry into Murdered Missing and Indigenous Women and Girls (MMIWG), in its 1,200-page report, stated ‘genocide’ to not only mean the immediate destruction of a nation, but also a coordinated plan to destroy essential foundations of national groups, “with the aim of annihilating the groups themselves.”

“Canada has displayed a continuous policy, with shifting expressed motives but an ultimately steady intention, to destroy Indigenous peoples physically, biologically, and as social units, thereby fulfilling the required specific intent element,” a supplemental report, which was released alongside the final report, said

The report took a staggering three years and included interviews with around 2,000 Canadians and consultation with the loved ones of Indigenous victims of systemic racism and violence.

Indigenous women and girls are 12 times more likely to be slain or abducted than members of any other demographic group in Canada, the report found.

The inquiry blamed the lack of police protection for Indigenous women, the continuation of the Indian Act and the existence of government-backed residential schools where Indigenous children were brought in to endure “starvation, deliberate infection of diseases, beating, torture, rape, solitary confinement, assaults and ill-treatment,” for the genocide.

However, Tamara Starblanket, author of Suffer the Little Children: Genocide, Indigenous Nations and the Canadian State, in an interview with the CBC said the inquiry “overstepped its mandate with its conclusion of calling it a ‘Canadian genocide’.”

Starblanket said Ottawa had insulated itself from the crime owing to the adoption of only two of the five acts included in the UN’s definition of genocide.

“There is no such thing as Canadian genocide because genocide itself is a crime in international law,” she said.

Along with the causes of Indigenous peoples’ anguish, the report also suggested 231 recommendations to mitigate their predicament.

Marion Buller, chief commissioner of the inquiry, said the recommendations laid out in the report are not just suggestions but instead “legal imperatives” that must be acted upon in order to mitigate the violence that has beset the entire community.

Brenda Wastasecoot, assistant professor in the faculty of Arts and Science’s Centre for Indigenous Studies at the University of Toronto, said one of the main recommendations she feels should be urgently addressed is the suggestion in the report to overhaul the allocation of funding towards health care in areas populated by Indigenous communities.

“Those areas don’t have resources in the communities such as counselling or support services like shelters, which keeps them stuck in these violent and abusive relationships,” Wastasecoot said.

This comes against the backdrop of a number of healthcare cuts by the Ontario government, including the slashing of mental health care funding by $52 million for 2019-20.

“They were the lifeline for a lot of native women who flee to Toronto to get out of those violent relationships. They need help,” Wastasecoot said.

She fumbled her words momentarily after which, she said, “I was one of them.”

Another main recommendation she said was most salient was the induction of Indigenous people into the police force.

“The police force needs to be Indigenized,” she said.

The report said the lack of adequate representation of Indigenous communities in the force caused mistrust towards the RCMP.

“The continued racism and sexism by many RCMP officers directed at Indigenous Peoples, the high rates of missing and murdered Indigenous women … have caused many Indigenous Peoples and communities to lose trust and confidence in the Canadian justice system, the RCMP, and police services in general,” the report said.

The report also pointed out instances of police failure to act urgently when they were briefed about disappearances of members of the Indigenous families.

The RCMP released a statement to apologize for those cases but authors of the report have said that an apology isn’t enough. “These words must be accompanied by action,” the report read.

Wastasecoot said the report, which was part of a truth-telling process, won’t directly lead to changes, but will spark awareness and encourage people to rally for their rights.