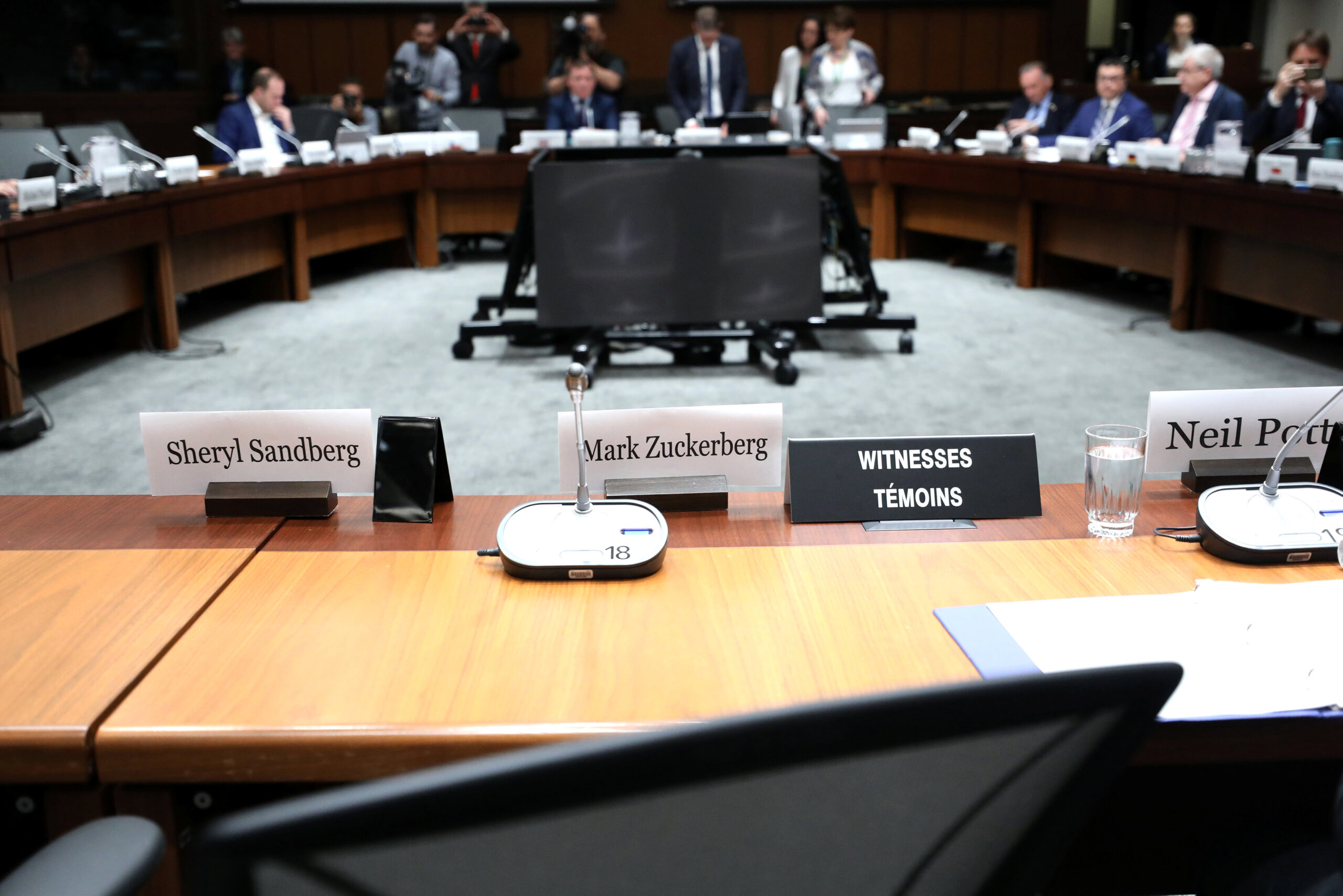 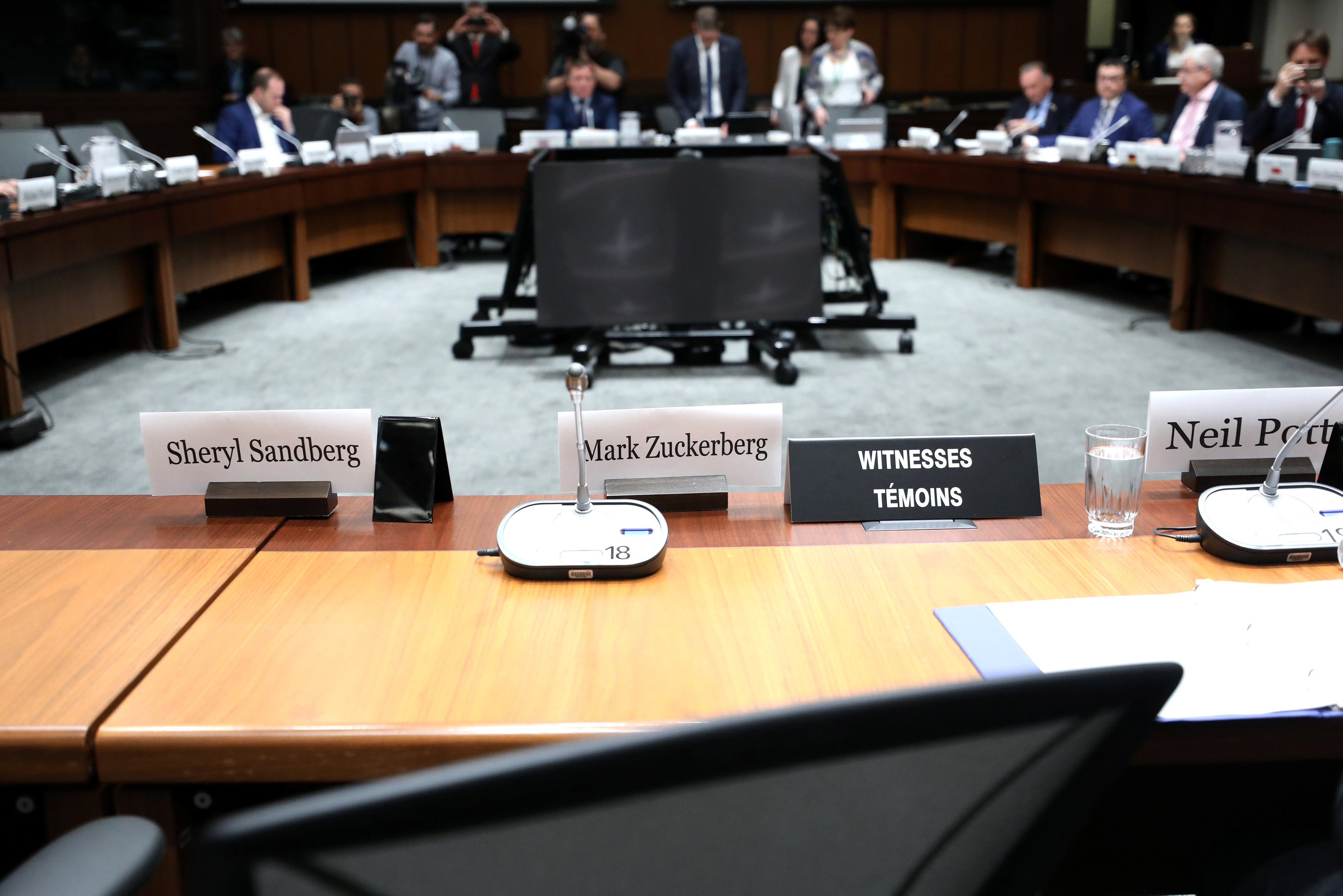 An empty chair and nameplates are pictured after Facebook CEO Mark Zuckerberg and COO Sheryl Sandberg failed to appear at the International Grand Committee on Big Data, Privacy and Democracy meeting on Parliament Hill in Ottawa on May 28, 2019. (REUTERS/Chris Wattie)

The International Grand Committee on Big Data, Privacy and Democracy convened for the second straight day in Ottawa this morning.

It was decided that Facebook founder and CEO, Mark Zuckerberg, and COO Sheryl Sandberg will be served a formal summons the next time either step foot on Canadian soil, as voted by the Standing Committee on Access to Information, Privacy and Ethics.

Zuckerberg and Sandberg shirked their subpoenaed responsibility to attend the committee hearings taking place this week and will be held in contempt of Parliament if they ignore their summons, despite the presence of Facebook representatives at the gathering.

“It really speaks to the fact that countries have very little power in influencing what happens,” said Francis Syms, professor of cybersecurity at Humber College.

“There was no reason for him to come down. He is going to get slapped … but ultimately there is no consequence for Facebook,” Syms said.

Politicians, tech-giant representatives and industry leaders from all over the world arrived in Ottawa to discuss the Internet, artificial intelligence, social media and digital privacy, and the growing issues that they present.

Executives from other tech giants, Twitter and Google, were also asked to show up but all failed to attend and sent representatives in their stead to address the committee as well.

Going around the room, each politician from the respective delegations expressed disappointment in not being able to question Zuckerberg and Sandberg directly.

“He wrote, ‘I believe Facebook has the responsibility to address harmful content, protecting elections, privacy and data protection and data portability,’ the very issues we are discussing today,” Erskine-Smith said. “’I’m looking forward to discussing them with lawmakers around the world.’ Those were his words.

“If he was an honest individual in writing those words, he’d be sitting in that chair today,” he said. 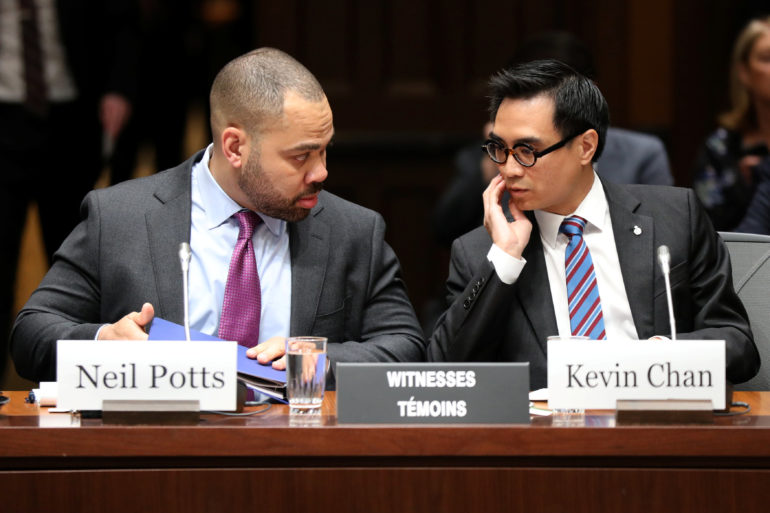 Potts tried to address the idea at the hearing that Zuckerberg and Sandberg “are eschewing their duty” in not attending, which was a theme developing, he said.

“They have mandated and authorized Mr. Chan and myself to appear for this committee to work with you all. We want to do that in a very cooperative way,” Potts said.

Chair of the committee and Conservative MP Bob Zimmer responded to Potts’ statement.

“With respect, it’s not your decision to select whether you are going to come or not,” Zimmer said.

“It shows a little bit of disdain from Mark Zuckerberg and Ms. Sandberg to simply choose not to come and it just shows there is a lack of an understanding about what we do as legislators,” he said.

“To use you two individuals in their stead is simply not acceptable,” Zimmer said.

During the proceedings politicians from the United Kingdom, Argentina, Belgium, Brazil, France, Ireland, Latvia, Singapore, Ecuador, Mexico, Morocco and Trinidad and Tobago, as well as Canadian MPs, volleyed questions regarding the protocols each tech company goes through to mitigate the proliferation of misinformation, hate speech and the unwanted collection of personal data.

The amount of data available to be mined and used to manipulate individuals is growing as people become increasingly more dependent on the different digital platforms and services.

“There are a couple of companies in the world, like Oracle and Axiom, and they purportedly have more than 10 per cent of the world’s population listed in their databases,” Syms said.

“They are pretty much able to predict 10 different attributes that they would never want them to know,” he said. “Your socioeconomic class, race, religion, sexual preferences.”

Syms said, with that information people can be lied to, misled and manipulated by having their fears and concerns played with.

The morning began with critics of the big tech companies speaking their case for more government regulations, like the EU’s General Data Protection Regulation. They also touched upon the dangerous functions the Internet provides and the insidious nature of digital profiling.

Among them was Canadian Jim Balsillie, former co-CEO of BlackBerry, who specifically addressed Google’s Sidewalks Labs in Toronto, a tech collaboration zone where participants won’t have ownership of their intellectual property.

“We Canadians are currently in a historic battle for the future of our democracy with the charade called Sidewalk Toronto,” Balsillie said.

Changes need to be made soon if power is to be wrestled away from the social media and digital juggernauts, Syms said.

“What I worry about is that we are at a tipping point now with those large companies,” he said.

“I’m optimistic in the next three to five years if we can make a change, but it’s going to have to be quick. Because once we start getting things like artificial intelligence and faster computers, it’s going to be a lot harder to control,” Syms said.

The committee will meet again in the afternoon and for a final time on Wednesday.