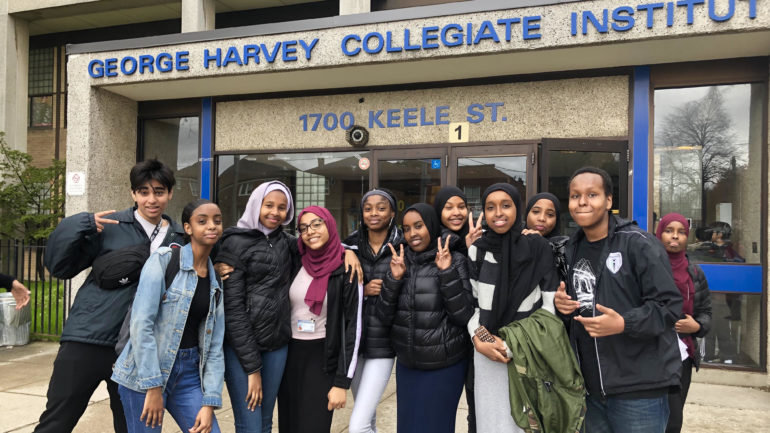 Muhsinah Varachhia (sixth from right) and Abda Samiva (second from left) with their York Memorial C.I. classmates in front of their new temporary school at George Harvey C.I. in Toronto. They were displaced when York Memorial went up in flames last week. (Su Kustric)

A week has passed since the fire at the Eglinton Avenue and Keele Street area school, and students will have to make up the missed time during an extra school week in June.

“It’s been a lot of effort to make sure that we have a proper learning environment for the kids,” said Shari Schwartz-Maltz, media relations and issues manager at Toronto District School Board. “Last week was focused on integrating them into George Harvey,” located a few blocks south on Keele Street.

Many teachers and students feel their new school is their second home so the transition has been very difficult for them, she said.

“George Harvey is helping a lot to make sure it all works out,” Schwartz-Maltz said.

“It’s not that bad, at least we have a school to go to, but I miss my old school,” Varacchia said. “We don’t even know where our classes are.”

The Grade 9 student said many students lost their books, notes and laptops in the fire, while teachers lost exam papers, worksheets and marks.

That means the marks students studied hard for are lost in the fire forever, Varacchia said.

With a capacity of 2,000, George Harvey Collegiate Institute has plenty of space for the displaced students, but the integration of new students will not be easy.

“We have our own classrooms and out old teachers are very understanding, but I think they are going through more than us,” fellow York Memorial student Abda Samiva said. “Some of them have been in our school for more than 15 years.”

Students have also been told that they might combine and unify their school with George Harvey C.I.

“No one wants that, because most of the students from George Harvey don’t really know us,” she said. “Sometimes they even give us bad looks in the hallways.”

Besides that, students complained that a George Harvey teacher even sarcastically called new students strangers, which made them feel even more unwelcome, the students said.