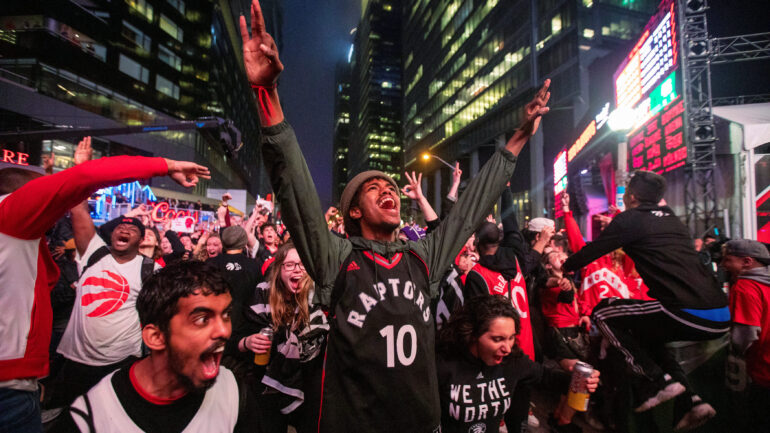 Fans cheering for the Raptors during game six of the Eastern Conference Finals at Jurassic Park outside of Scotiabank Arean in Toronto on May 25. (REUTERS/Carlos Osorio)

Toronto Raptors fans have been urged to be aware of an ongoing scam targeting online ticket sales, Peel Region police said in a news release Monday.

The first game of the 2019 NBA Finals will be held Thursday at 9:00 p.m. against the Golden State Warriors and it’s the first time in franchise history that the Raptors have reached this stage.

Tickets went on sale Monday evening on Ticketmaster, the official partner of the NBA, and sold out within half an hour, CBC News said.

Many complaints were reported by fans who hoped to get Finals tickets but ended up with fakes instead, Peel police said.

“Police anticipate that, in light of the Toronto Raptors’ current success, future attempts to defraud members of the public will continue,” the release said.

Members of the public should take additional measures to avoid fraud and be wary of online scams, police said.

This isn’t the first time that Raptors fans have had to remain vigilant.

In 2017 a similar scam was reported by the Toronto Star.

@6ixUprise Still waiting for the tickets I won? Game is tomorrow! Or is this a scam and you try to collect "a fee" from winners? @Raptors

“The scammers asked for $50 refundable e-transfer fees before tickets would be sent,” the Toronto Star reported in 2017. “The fake accounts also offered far more costly ‘upgrade’ and VIP packages for courtside seats.”

Officers also reminded citizens to use designated websites to buy their tickets.

Websites like http://www.antifraudcentre.ca/ have been provided to make people familiar with other types of fraud.

Police also provided phone numbers and other contact details, so anyone who has any information can directly provide information to the Fraud Bureau at (905) 453–2121, ext. 3335.

“Information may also be left anonymously by calling Peel Crime Stoppers at 1-800-222-TIPS (8477), or by visiting peelcrimestoppers.ca,” according to the news release.